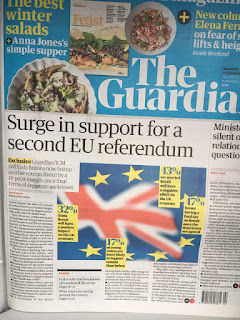 During World War II a number of warning posters were put up all over with the slogan "careless talk costs lives". How right they were; more so than they knew at the time. The context is different and it is seventy years later, but it's as true as ever. A few days ago I warned that Nigel Farage's irresponsible slip of the tongue regarding a second Brexit referendum represented a very dangerous chink in the armour of the Leave campaign, see: http://hpanwo-voice.blogspot.co.uk/2018/01/farage-loses-his-mind.html. As I predicted, the Remoaners have rushed towards it like a school of hungry piranhas. The following week, The Daily Telegraph reported that the could rejoin the European Union in the future, according to the deputy Prime Minister. Then today the above headline appeared in The Guardian. Here is the online version of the article: https://www.theguardian.com/politics/2018/jan/26/britons-favour-second-referendum-brexit-icm-poll. According to a poll, the popularity of the idea of a second Brexit referendum has soared. There is now sixteen points, allegedly, between it and those, like me, who think the decision of the original referendum should stand. I don't know how accurate that poll is, and The Guarr-iddian is hardly an unbiased outlet, but the fact that the report was published so soon after Farage's clanger is not coincidental. The fact that The Daily Mail is quoting it too makes it more credible. Like I said long ago, as time passes, memory fades and things said and done get shoved down the Memory Hole; the 2016 referendum is being relegated to no more than an interim opinion poll. If what the deputy Prime Minister said is true, then the pressure of the Remoaners will never cease. Even after the spring of 2019, when the Article 50 process is due to be complete, they will still be trying to crowbar this country back into .

How can we possibly resist that? Remember that the Remoaners have one hundred percent of the establishment backing them up. We may simply have to hope we can hold out until the entire edifice of that dictatorial continental empire comes crashing down in whole. There are encouraging signs that this is happening. The EU is suffering numerous economic, social and political problems. More and more people within it are rebelling. recently elected an anti-EU coalition of two parties, the FPO and the OVP (Freedom Party of Austria and the Austrian People's Party) and these have formed a government that has ousted the pro-EU and pro-globalist SPO-Green Party alliance. Similar movements are rising in other EU countries... or "member states", as the EU government insists on calling them. The thing is, the collapse of the EU is inevitable and should be welcomed, but it will still be a traumatic upheaval when it happens and the more nations which can jump ship before it hits the iceberg the easier it will be for them, and for everybody else. You might criticize the title I've used for the post as melodramatic and an exaggeration. Being in the EU is not like facing Adolf Hitler's expansionism in World War II, is it? Yes it is. A nation occupied by an illegal foreign invader... yes, that's what the EU is... rarely endures in that state without any loss of human life. Remember, the European Commission is an unelected tyranny. They can do whatever they like with us; unless we free ourselves from them before they get the chance.
See here for background: https://hpanwo-voice.blogspot.co.uk/2017/12/merry-christmas-from-remoaners.html.
And: http://hpanwo-tv.blogspot.co.uk/2017/03/richard-dawkins-patronizing-git.html.
And: http://hpanwo-voice.blogspot.co.uk/2017/03/article-50-at-last.html.
And: http://hpanwo-radio.blogspot.co.uk/2016/06/programme-193-podcast-eu-referendum.html.
Posted by Ben Emlyn-Jones at 20:28