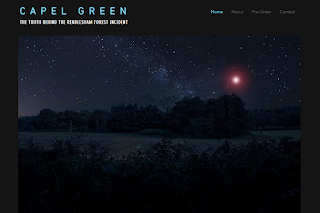 On Christmas Eve the teaser trailer for Capel Green was released, see: https://hpanwo-voice.blogspot.co.uk/2017/12/the-larry-warren-controversy-part-28.html.
On the 28th of December, the thirty-seventh anniversary of Larry Warren's experience, the full official trailer hit the net, see: https://www.youtube.com/watch?v=-q2kYGro4DI.
What has followed is a situation that is probably unique in the entire history of cinema, a number of film reviews for Capel Green have already been published, despite the fact that the film has not yet been released and so the critics have not seen it. I was under the impression that the necessity to view the movie concerned was one of the obvious fundamentals of cinematic commentary... Not any more! One pundit described the part of the film dealing with Larry's polygraph test as "a fraud" and that the test "was not carried out properly". The polygraph operator was attacked personally by several members and affiliates of the Larry Warren Hate Cult. They managed to find some defamatory material made about her by a business rival and based their judgement of her on that alone. A well-known LWHC hanger-on warned that the film's producers were trying to change the name of the entire Rendlesham Forest Incident to "Capel Green", which is nonsense. Some thought that the film ought to be called "Casper Green" and designed a poster featuring the eponymous friendly ghost from children's cartoon series.

The enemy appear to be digging in for a siege. I remarked a few weeks ago how strange it was that Peter Robbins did not unfriend me until 's statement about Larry passing the polygraph was available. This, I suspect, is because that eventuality made him realize that he has made a terrible mistake denouncing Larry and he now needs to isolate himself from anybody who delivers the information exposing his blunder. This is a far easier thing to do than simply approach Larry and publicly apologize. If Peter does the latter then he'll earn my deepest respect. The publication of the news about Capel Green has lost me more friends. This time one of them is somebody who was closer than Peter and whom I valued more; Andrew Burlington, the man known as "Victor Nevada". See here for details of our collaboration: http://hpanwo.blogspot.co.uk/2015/01/area-51-alien-interview-new-research.html and: http://hpanwo-radio.blogspot.co.uk/2016/07/programme-196-podcast-alien-interview-20.html. I honestly don't know what motivates Andrew to ally himself with the LWHC. He appears to know almost nothing about the Larry Warren situation and whenever I tried to enter into a discussion with him about it he went silent. He has become morbidly fixated on the A10 photo and believes Gary and Larry have perpetrated a hoax using it; although he cannot articulate his reasoning. I explained to him that this is a complete non-issue. Nobody is pretending there is a print with a genuine UFO in it and so there is no hoax. This is ancient history and nobody cares about it anymore except Andrew. Gary never addressed the Sayers-Martens print with any more evidential weight than it deserved at the time. Larry's own print has no UFO in it and Larry is not pretending otherwise; so what is the nature of this alleged hoax? Andrew could not explain, yet he continues doggedly to insist that a hoax is taking place. He became more and more distant from me during the last few months. In the end he unfriended me on Facebook because I had said this in the background link above: "The LWHC have tricked, manipulated and blackmailed the weakest and most indifferent members of our community into becoming their second tier of supporters." He said that this was "insulting" and "uncalled for". I had to be honest and tell him that I thought it was completely called for; I don't care if anybody feels insulted and I do not apologize. Another friendship comes to an end. There will be more I'm sure. As I've said before, when a Truth mob comes to town everybody drops what they're doing and thinks about nothing else, see: https://hpanwo-voice.blogspot.co.uk/2016/09/truth-mobbed-again.html. I will be very relieved when all this is over. I know my relationships with others are passing through the eye of a needle right now; I just wish I could get it over with in one go!
See here for my complete detailed assessment of the Larry Warren controversy: https://hpanwo-voice.blogspot.co.uk/2016/12/is-larry-warren-fraud.html.
And: http://hpanwo-radio.blogspot.co.uk/2017/05/programme-236-podcast-larry-warren.html.
And: http://hpanwo-tv.blogspot.co.uk/2017/05/larry-warren-in-rendlesham-forest-2017.html.
Posted by Ben Emlyn-Jones at 17:17