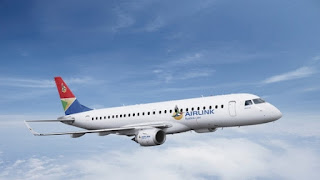 Back in June, the access contract for was signed. It was awarded to the South African operator SA Airlink, see: http://hpanwo-voice.blogspot.co.uk/2017/06/st-helena-airport-access-contract.html. The airline will be carrying out the first ever commercial flight to St Helena Airport on Monday the 21st of August 2017 (Oddly enough this will be the day of the Great American Eclipse; are these people astrologers?). The aircraft will be SA Airlink's brand new Embraer E190, a medium range twin-engine jet that can carry between eighty to a hundred and twenty-four passengers. Unfortunately all the tickets have been reserved for VIP's among the SA Airlink executives and the St Helena Government on this historic celebratory flight; but if this proving flight goes well a full regular schedule will begin, and after that you will be able to purchase a ticket and fly to on easy terms. The route will eventually be extended to Ascension. The plane will depart Johannesburg at 7 AM local time, that's 6 AM British Summer Time, and will stopover at Windhoek in Namibia for half an hour before setting out over the Atlantic Ocean towards St Helena. It is expected to land on St Helena at 1.15 PM local time, that's 2.15 PM BST (St Helena does not change its clocks in spring and uses Greenwich Mean Time all year round). Source: https://whatthesaintsdidnext.com/2017/07/22/flights-st-helena-johannesburg-cape-town-announced/. The stay of execution for the faithful old RMS St Helena will then sadly be over and she will be retired in February next year. After that she will probably head for the breakers yard. This maiden commercial flight to is the final step in a process that was begun when construction of the airport commenced in 2012. I began covering this subject in March 2014, see background links below. The first ever landing at took place there in September 2015; a Beechcraft light aircraft was sent there to help with a medical emergency. Since then there have been thirty-one other landings, mostly test missions, but there has been a helicopter as well and two military aircraft on classified missions; see background links below. However Monday's flight marks the start of normal access; in other words, it is the moment when joins the international list of active passenger aviation transport hubs. This day, more than any other milestone, marks the moment when the gates of global society are swung open and the outside world pours in onto that little island. For better or for worse... or maybe a bit of both. There is no going back now. The dye is cast.
See here for background: http://hpanwo-radio.blogspot.co.uk/2016/11/programme-212-podcast-st-helena-airport.html.
And: http://hpanwo-voice.blogspot.co.uk/2016/12/st-helena-airport-first-military-flight.html.
And: http://hpanwo-tv.blogspot.co.uk/2016/06/st-helena-airport-opens.html.
And: http://hpanwo-voice.blogspot.co.uk/2017/03/debit-cards-on-st-helena.html.
And: http://hpanwo-voice.blogspot.co.uk/2016/10/tristan-da-cunha-st-helena-plus.html.
Posted by Ben Emlyn-Jones at 19:32