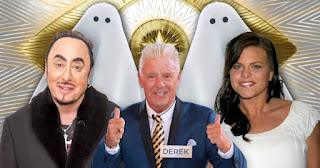 Celebrity Big Brother 2017 is underway. This Orwellian TV franchise has been running for twenty years and has been exported to fifty-four countries. The latest instalment of evictions, arguments, communal sleeping and cameras in the toilet stars a number of celebrities; however, and maybe I'm just displaying my alienation from popular culture, I have only heard of one of these people, Derek Acorah, see: http://bigbrother.channel5.com/housemates. Derek Acorah is a self-styled psychic medium who has risen to the heights of stardom via his professed ability to talk to the dead. He became famous as one of the hosts of Most Haunted. David Icke has also had readings with him. Despite this, his psychic ability has been called into question and a few times he has been caught out cheating. He once claimed to channel the spirit of a dead South African prisoner warder called Kreed Kafer. He was actually hot reading disinformation he had been fed. Kreed Kafer never existed and was only invented by some skeptics who wanted to catch Acorah out. The name is an anagram of "Derek faker". Therefore quite a few TV viewers will be rolling their eyes and folding their arms over Acorah's latest scoop. He says that the Big Brother house is haunted by the ghosts of two housemates from previous series. David Gest was a TV actor and the ex-husband of the actress Liza Minnelli. He was in the 2016 Celebrity Big Brother and died a few months later of a stroke. Jade Goody appeared in the 2002 season of Big Brother and went on to become a household name. She returned to the series in Celebrity Big Brother 2007. She died of cervical cancer at the tender age of twenty-seven. Derek Acorah says he has seen the spirits of both former contestants in the house as well as orbs and mist. Source: http://metro.co.uk/2017/08/02/derek-acorah-claims-celebrity-big-brother-house-is-haunted-by-the-ghosts-of-jade-goody-and-david-gest-6825266/.

Just because a psychic medium carries out fraud does not necessarily follow that they are not a real medium, but it does totally ruin their credibility. Some genuine mediums will fake the effects when they're having trouble connecting to spirit. I advise never to be tempted into that. It is better to be honest with the audience, tell them the spirits are simply not cooperating tonight and offer them their money back. One reason Acorah may be blagging again this time is because Jade Goody might not be dead. Like Jo Cox MP (see background links below), she may have faked her own death and is now living a long way from her previous home under a new identity. This was suggested by Ian R Crane in one of his lectures and there is good reason to suggest this. Firstly, despite being terminally ill she does not look very sick in her photos at the time. She lost her hair, allegedly due to chemotherapy, but did not loose much weight or exhibit any other obvious symptoms. The way her diagnosis was revealed to her was extraordinary. She was a housemate in the Indian version of the show, called Bigg Boss, when she was called to the diary room and given the news on the phone by her doctor in . She was then allowed to return to the house where she broke down in tears and was consoled by the other housemates, see: https://www.youtube.com/watch?v=LhVefAit_K8. Under no circumstances would any doctor consult with a patient in that manner, especially when it comes to news that is so terrible. What would have happened is that Jade would be called to the diary room and told by Big Brother that she had to leave the house for medical reasons. She would then be taken to the surgery and told by the doctor in person. In fact it is unlikely that she would even have been allowed to be a contestant while undergoing tests for the disease. This was a test for the cancer itself, not just a positive papilloma smear test. Why would Jade fake her own death? Ian suspects it is to help market "Gardesil", the human papilloma virus vaccine, see: https://www.youtube.com/watch?v=4fk7ydeFPxs. I'm not sure about this. Jade Goody would be a bad choice for this kind of scam because her personality is not one I would judge as being good for keeping a secret.
See here for background: http://hpanwo-voice.blogspot.co.uk/2009/03/jade-goodly-dies.html.
And: http://hpanwo-radio.blogspot.co.uk/2016/12/programme-214-podcast-trial-of-thomas.html.
And: http://hpanwo-voice.blogspot.co.uk/2015/04/derek-acorah-maddies-dead.html.
And: http://hpanwo.blogspot.co.uk/2007/11/reality-tv.html.
Posted by Ben Emlyn-Jones at 18:11