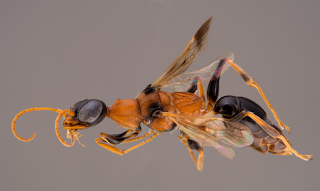 Last year I came across a report that bees were behaving like zombies; the so-called "flight of the living dead" caused beehives to be left deserted as their residents became mindless and uncoordinated like Romeroesque zombies, until they died. This was caused by a parasitic fly larva and spread right across ; another addition to the worrying phenomenon of disappearing bees, "colony collapse disorder", see: http://hpanwo-voice.blogspot.co.uk/2014/02/zombie-bees.html. There has also been the emerging trend of fictional zombies becoming a reality, see background links below. Now a new species of wasp has been discovered. It lives in and the first specimens were found last year in the Greater Mekong region of by a German biologist, Herman Ohl... allegedly. It is from a family of wasps that preys on cockroaches, yet this particular species is highly unusual, especially in its hunting methods. When it attacks a cockroach it aims for the head, bites it and injects specialized venom into the insect's brain. The poison blocks the receptors for octopamine, a vital insect neurochemical. This causes the cockroach to lose its ability to move properly. It remains alive, but ungainly and uncontrolled. The wasp can then lead it back to its nest where it can devour it at its leisure. The museum that organized the expedition which discovered the wasp asked its visitors to choose a name and they favoured "dementor" because of the fictional creatures from the Harry Potter books, so the insect was given the Latin name Ampulex Dementor, "Ampulex" being the genus of cockroach-eating wasps it belongs to, see: http://www.washingtonpost.com/news/speaking-of-science/wp/2015/05/27/say-hello-to-the-dementor-wasp-it-turns-cockroaches-into-zombies/. Dementors are one of the most frightening creations of JK Rowling; she invented them when she was clinically depressed and it shows. They are soulless spectral beings which attack living humans and suck out their consciousness in order to gain spiritual sustenance. The victim's body remains physically alive, but inert and robotic. An book that I once read long ago is a good fictional exploration of this state, although it's quite old now, The Soul of Anna Klane by Terrel Miedaner, see: http://www.goodreads.com/book/show/1999547.The_Soul_of_Anna_Klane. So these beings are not zombies themselves, but they create zombie-like beings out of the living, like the wasp. I can't help wondering where this wasp species actually comes from. Did it really evolve naturally? If so why wasn't it discovered long ago? The region in which it was found, northeast , is not far from the borders of and . The had a major presence there during the 1960's and early 70's because of that long, devastating and futile war. During the war various new military methods were used and tested, including chemical attacks with Agent Orange, a toxin created by Monsanto. Also weather control experiments, see: http://hpanwo-voice.blogspot.co.uk/2014/07/lynmouth-flood.html. These operations are no longer classified, but did the Americans also do biological warfare experiments there which still are? Could the "Dementor wasp" have been one of the results? If so is there a connection between that and the biowarfare programme at Fort Detrick which might be behind the zombie-like behaviour in humans, see background links?
See here for background: http://hpanwo-tv.blogspot.co.uk/2015/01/real-zombies-2015.html.
And: http://hpanwo-voice.blogspot.co.uk/2015/04/zombie-tube-trick.html.
Posted by Ben Emlyn-Jones at 18:03