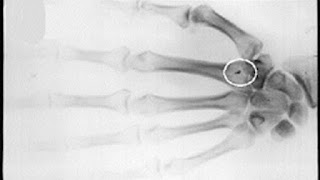 I was in two minds about whether to write about this subject or not, but after long reflection I think I should. One of the strangest phenomena in the UFO field is that of "alien implants"; it's also one of the most important because of its considerable level of physical evidence. Some people have reported that they have had objects inserted into their bodies, almost always people who also experience contact with extraterrestrial beings and/or are otherwise involved in the UFO or mind control field. There are many theories about what the function and purpose of these implants are, but nobody knows for sure. Skeptics say that these implants are just loose fragments of tooth enamel, gallstones or other natural objects that have moved from their normal place in the body; either that or shards of glass, pencil leads, shrapnel and splinters etc. This is not true. Implants are sometimes retrieved from the body by surgery and they are usually very different indeed. They tend to be metallic lumps, 0.2 to 0.4 inches in size, covered with an outer layer of a plastic or ceramic substance; chemical analysis reveals that they don't very often resemble anything constructed by man on the Earth, and they certainly never look like conventional electronics. Typically there is no scar tissue on the skin close to the implant site nor any swelling and irritation around the location which would normally happen with a natural foreign body. On the contrary, nerves and blood vessels intertwine with the object as if it is intended to become part of the patient's own biology. The late Dr Roger Leir specialized in surgically removing alien implants and examining them, see: http://hpanwo-voice.blogspot.co.uk/2014/03/dr-roger-leir-dies.html. These implants can sometimes be detected on X-rays and other forms of medical imaging. They also sometimes emit electromagnetic signals. The most common parts of the body they are found in are the hands and feet, other places in the limbs or the head. They have been detected deep in the interior of organs like the brain or eyes; places where they could not possibly have been inserted by any known surgical means, nor have entered the body accidentally unless through some very obvious debilitating or fatal traumatic injury.

Last week I spoke at the Bases at Merlin's Mound conference, see: http://hpanwo-voice.blogspot.co.uk/2015/06/bases-at-woodborough-ben-emlyn-jones.html. During the interval between speakers there were some small workshops in adjacent rooms. One of those was a team who claimed to be able to detect some implants within the body. They offered their services to delegates free of charge and many volunteered to be examined. I have had no contact experience at all that I'm aware of. I have seen unidentified flying objects, but have never encountered an alien being. Therefore I had no reason at all to think that I myself needed to be checked over. When I voiced that belief to one of the delegates he stared at me very hard and said emphatically: "Don't say that!" I was quite taken aback. So I decided to join the queue of people outside the room they were using for the procedure. In the end there was no time for everybody who wished it to be scanned; but as luck, or providence, would have it another opportunity arose. After the conference I had to stay overnight in Wiltshire because I don't have my own transport. I spent the evening and following morning with some other people who'd been at the event and ended up at the house of one of the team members who'd been doing the implant detection. I asked him if he'd check me over and he agreed. The tools he uses resemble the detector wands airport security staff use for making sure passengers are not carrying anything dangerous. There are three different types of tool; a radio frequency scanner, an electromagnetic field meter and a metal detector. The method was simple. I had to stand in the middle of a room and empty my pockets. The man then switched off all the electrical appliances in the house to minimize any electronic noise that might generate a false-positive or drown out any signal. Then he ran all three devices over the surfaces of my body. The metal detector squeaked loudly when it came across my belt buckle and the metal in my trouser zips, but otherwise remained silent. However after that things got interesting. The RF scanner picked something up. It was just a single pulse of about 8 megahertz coming from my left upper arm. This is the frequency emitted by telephones and TV sets, but all those in the house had been isolated. The electromagnetic field meter also registered activity in that area, although the man doing the scan told me his EM field test is not as precise. What I found interesting was that the spot on my body where the pulse came from is one I alerted HPANWO TV viewers to in a semi-jocular tone just under two years ago, see here at 35.00: http://hpanwo-tv.blogspot.co.uk/2013/11/ufo-truth-magazine-conference-2013.html. I was initially a rather alarmed; I expected that he would find nothing at all inside me, but I was curious and wanted to put myself in the clear. As I said, I definitely had no reason to suspect otherwise. I have no recollection at all of any experience that might correlate with an implant being stuck in me. It didn't take long for me to get a grip though. I know people who are far worse off in that respect. I have friends who have implants in their eyeballs, brain, nose and jaw. In the case of Kieran Lee Perrin these are close to his teeth and seem to have been specifically designed to cause him intense pain, see: https://www.youtube.com/watch?v=BMMy2-Y9vvo. No, I've got nothing to complain about.

I'm not sure what to do now, if anything at all. While I was at the house where I got scanned, a psychically-sensitive lady was also there and she dowsed me. She told me that the implant had been put there by aliens that looked like greys except they were coloured green. They'd done it two years ago as part of an attempt to make contact with me; about the time I first noticed that mark on my arm. This attempt had not worked and had been abandoned. They said they will not try it again. If this object has been in my body for two years it has had no effect that I'm aware of; therefore why should I be concerned now? Why me? That's the question. Perhaps it's simply due to my interest in UFO's, or to do with my past. I have had issues with people involved in government mind control targeting my family, see: http://hpanwo-voice.blogspot.co.uk/2014/08/ben-emlyn-jones-on-revolution-radio.html. However, what if there is no implant at all and the scanner registered wrongly? I would need to confirm the presence of this object with proper medical imaging. The problem is that these procedures are not available on the NHS. If I go to my GP and ask him to refer me for an X-ray or magnetic resonance imaging to see if there's an object inserted into my arm by space aliens; he'll refer me alright, but not to X-ray... to the psychiatric clinic. What I could do is feign an injury to the effected limb, go to A and E and get an X-ray that way. However if I demanded that the radiographer let me take home the print they might get suspicious. Anyway some implants are X-ray lucent and only show up on MRI's. A private MRI scan would be expensive; too expensive for my budget. As for surgical removal, if such a thing is even possible; that would cost even more. Prices depend on where the object is in the body, but there's another problem. Some people go to great expense and put themselves through a painful operation to rid themselves of their alien implant, only to have it replaced soon afterwards. A lady I know had an implant in her nose. She travelled all the way to to have a private operation to remove it. A couple of weeks after she'd flown home somebody... or something... had put another one into her, in the exact same spot. So for now I'm going to just let it be. If nothing untoward has happened during the last twenty-four months I don't expect anything to in the next twenty-four or longer. I'll keep you posted with any updates on this matter, should there be any.
Posted by Ben Emlyn-Jones at 18:33

Wow Ben!, Thats interesting and a little disturbing, insomuch as you not knowing. I was thinking of this very scenario the other day, though perhaps I had heard you mention that there was this 'service' being offered at the conference. I would think it is not an implant of any malicious reasoning )if it is an implant) but it is no less confounding!. Lately I have had somewhat of a recall of my being in my bedroom as a child at night. My bedroom backed onto the garden with a pitched roofed annex directly underneath. I have vague memories of something appearing at my window - allbeit vague - trying to get my attention and then me hiding in fright, but at the moment that's as far as it goes.Strangely I was compelled to buy the Haunted Skies Book for 1980 (year of my birth) to 1986. It's a large book but there seems to be quite a few cases of UFO'S in the Birmingham area that year. Thanks for the post Ben. Hope your weekend is going well. Cheers

I'm OK thanks, X. Very busy. The problem is that although aliens exhibit a wide variety of behaviour and seem to have many different agendas and motivations, alien contact is always life-changing and causes upheavals.

Or... the Greek doctors had taken the woman's money, and left the implant in place.

I think she had it X-rayed between the time it was removed and then replaced. That's an obvious precaution.