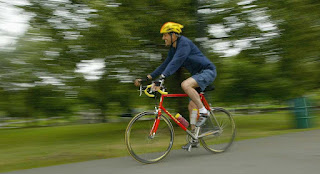 Newspapers have been reporting that The US Secretary of State John Kerry has broken his leg in a cycling accident. The seventy-two year old former presidential candidate is a keen cyclist and often carries his bicycle with him on overseas trips so he can go for a ride between diplomatic appointments. He was in taking part in nuclear arms limitation talks with the foreign minister of , Mohammed Javad Zarif, when the incident happened. According to the press, on Sunday May the 31st he was riding in the French Alps near Scionzier when he struck the kerb and fell off. He was taken to a nearby hospital and had X-rays that confirmed he had broken his right leg. He scrapped the rest of his tour and was flown back to his home in where he underwent surgery to repair his fractured right femur. Within days he was back to work from his hospital bed. He was strongly criticized by the businessman Donald Trump who said: "Secretary Kerry has absolutely no concept of negotiation... and then goes into a bicycle race at seventy-two years old, and falls and breaks his leg!", see: http://uk.businessinsider.com/donald-trump-criticizes-john-kerry-for-cycling-2015-6?r=US#ixzz3dJ8VQIAP.

John Kerry is married to the heiress Maria Teresa Simoes Fereira-Heinz, one of the richest women in the world. He is a member of the elite esoteric order the Skull and Bones Society; its rituals include the practice of homosexual acts while lying in a coffin and their temple is decorated with the skeletons of Red Indian chiefs. Another famous "Bonesman" is George W Bush, the former President who "defeated" John Kerry in the 2004 Presidential "election". It's amazing to think that in that election the citizenry had no other choice than to have a president from the Skull and Bones Society. The duplicity surrounding Kerry of course continues to the present day, and that includes the above news story. I find it unusual that there is no visual record at all of John Kerry's bicycle crash. This is remarkable when you take into account the constant activities of the paparazzi and CCTV, as well as the omnipresent folk surveillance of mobile phone cameras. A famous face like John Kerry should have been filmed and photographed continuously yet not one image of him coming off his bike has been published, no doubt alongside the headline OUCH! or some other tabloid witticism. When the accident took place The Jerusalem Post supposedly began reporting that the Iranian news agency Nasim had revealed that there was no cycle accident at all; it was a cover story to explain John Kerry's injuries. The story goes that on the Sunday the 31st when he was supposed to be pedalling through the Alps, John Kerry travelled in secret to the Phalsbourg-Bourscheid military base in the Alsace region for a meeting with Colonel Gulmurod Khalimov, a top official from ISIL; this was just two days before a major conference in Paris on what to do about the Islamic State. Khalimov is the former head of 's special forces and intelligence agency who purportedly defected to ISIL. However he is in fact an asset of the CIA. A shoot-out erupted during the meeting in which John Kerry was severely injured. This appears to have been a planned ambush with the intent to assassinate Kerry; maybe because he was about to let walk away with its nuclear weapons programme intact. Perhaps it was a protest against current involvement in . Or was there another motive more nebulous and unexpected? John Kerry was repatriated to the immediately by a top military combat medical team, see: http://www.whatdoesitmean.com/index1874.htm. I don't normally consider Sorcha Faal a reliable news source, for example see: http://hpanwo-voice.blogspot.co.uk/2014/01/edward-snowden-ufo-disclosure.html, but there are some suspicious elements that might make this revelation real. The aforementioned lack of pictures and eyewitnesses accounts of this alleged bike crash is one. I went to The Jerusalem Post's website and there was no reference at all to the secret incident described. Of course this could have been removed from their website, and Nasim's too; however when using search I could not find any material on John Kerry dated after June the 2nd and nothing at all about any untoward incident, either two-wheeled or double-barrelled. This could mean that the JP's website editing was done very hastily and more was deleted than the censors intended. That is almost as incriminating as the presence of a positive report. The motive for the government covering up this attempted murder of their Secretary of State is probably because it would simply divulge the fact that their country is involved in secret negotiations with Islamic State. Nobody wants that do they? Not least because it might come out that ISIL is a creation of Mossad and their own intelligence services.
Posted by Ben Emlyn-Jones at 18:24

Thanks for the info Ben!