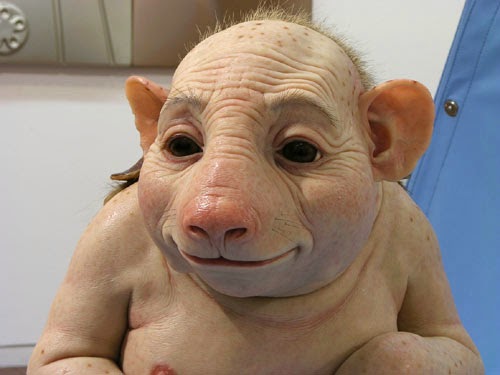 The world of science has created many wonders, and many nightmares. Science and technology are morally neutral and the outcomes of their works depend on the motives of the people wielding them. This is a cause of great concern among the public, quite rightly I think, especially when it comes to biology. Genetic engineering is a very new field of science, yet in its few short years it has transformed the world. Of course humans have been changing the nature of animals and plants by selectively breeding them since we began domesticating them in prehistoric times, yet it wasn't until 1974 that Prof. Rudolf Jaenisch bred the first animal with its DNA altered in a laboratory by artificial means, a mouse. Since then a myriad of new such GMO's- genetically modified organisms have emerged on an industrial scale. Farmers' fields are full of them and we're eating them every day; who knows what long term effect this will have on human health and the environment, see: http://hpanwo-voice.blogspot.co.uk/2013/11/rothamsted-update.html. GM animals are also being herded out of laboratories in droves; pigs with human genes to provide organs for transplantation, goats with spider genes so its milk can be used to make plastics, and mice bred to catch cancer so they can be studied for treatment. The term "mad scientist's laboratory" has sometimes been used to describe the biological sphere today, but maybe the scientists are not mad; in fact they're cold, calculating and purposive. When it comes to restraint and regulation there seems to be worryingly little; in a Machiavellian sense, what works best for the end result is the primary concern. There are a number of rules and laws governing it in relation to public health, but only in terms of immediate risk, such as disposing of chemicals in rivers etc. When it comes to future generations, it's a free for all. This is frankly psychopathic.

One of the most worrying areas is the creation of human animal hybrids. In 2008 the Human Fertilisation and Embryology Act legalized the creation of animal human hybrid embryoes for research purposes. There are several different methods for doing this. The simplest is natural fertilization of human and animal gametes; for example mixing human sperm with an animal ovum or vice versa. I've written before about hybridization and stated that it would be easy to create a human hybrid with one of the great apes because we're all part of the same biological family, see: http://hpanwo-voice.blogspot.co.uk/2014/02/real-ape-men.html; I also said that hybridization of organisms in totally different families was impossible, see: http://hpanwo-voice.blogspot.co.uk/2013/12/are-humans-related-to-pigs.html, but am I wrong? There are a few examples of "game hybrids" in which gamebirds have been crossed with domestic poultry. There are stuffed examples of birds that come from the mixing of pheasants and chickens; these are birds from entirely separate families, yet they're mutually fertile. What's more, in a laboratory there are other means of hybridization; one of the most common ones is creating a hybrid cell through cloning. A human nucleus is inserted into an animal cell; this creates a cell with human nuclear DNA and animal cellular DNA. Also embryoes can be generated in which stem cells from different species are fused together as the embryo grows. Even some scientists think this has gone too far and it could result in a "Planet of the Apes" scenario; I think The Island of Dr Moreau is a more accurate metaphor. The response from those behind the project is that these hybrid embryoes can be a source of stem cells for important medical applications, see: http://www.dailymail.co.uk/sciencetech/article-2017818/Embryos-involving-genes-animals-mixed-humans-produced-secretively-past-years.html. There's no doubt that stem cell therapy can do wonders, for example see: http://hpanwo-hpwa.blogspot.co.uk/2014/10/darek-fidyka-and-right-to-die.html, but think how this technology could be abused. According to the Human Fertilisation and Embryology Act of 2008 the scientists creating hybrid embryoes have to destroy them within fourteen days, but is the law the only thing stopping them gestating further? This is an extremely worrying scenario because work that is done within the laws and regulations is one thing, but work being done secretly behind that is another. There may well be a covert laboratory run by an evil genius sponsored by a rich maniac; or black budget government institutions like Porton Down and , where embryoes are allowed to grow beyond fourteen days, their cells dividing and developing. The hazards of breeding human-animal hybrids are enormous, the creation of new viruses for example. However, that's just one of the lesser risks. I'm sure you're all thinking this, HPANWO readers, just like I am; there's also the simple sense of good taste, public decency and ethics. The Dulce Book was written by somebody with the pen name "Branton"; nobody knows exactly who Branton is although he's rumoured to be John Lear. It concerns the alleged deep underground military base beneath the Archuleta Mesa near . Despite many claims to the contrary, I think there's some considerable truth behind the legend, see: http://hpanwo-radio.blogspot.co.uk/2014/08/programme-100-podcast-darcy-weir.html. One of the most memorable passages of the book is the description of the section of the base known as "Nightmare Hall": "...Level Six is privately called 'Nightmare Hall'. It holds the genetic labs. Here experiments are done on fish, seals, birds and mice that vastly alter them from their original forms. There are multi-armed and multi-legged humans and several cages and vats of humanoid bat-like creatures... Row after row of thousands of humans and human-mixture remains in cold storage. Here too are embryoes of humanoids in various stages of development..." (The Dulce Book can be read in its entirety here: http://www.thewatcherfiles.com/dulce_book.htm. One of the biggest human health issues surrounding these projects might end up being the psychological stability of the personnel involved. This is why we need to be wary of genetic science and speak out against it when necessary. Genetic science itself is not evil; it's the people who might be using it for evil purposes. The concessions made by the law to those who generate hybrids could be just the tip of a vast and dark iceberg.
Posted by Ben Emlyn-Jones at 18:41

Excellent article Ben you touch upon important aspects of Scientific Modes. All the best for 2015. Take care