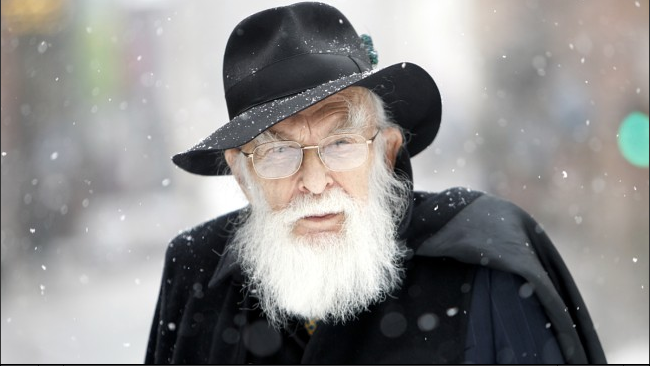 The title of his movie did seem strange, and Randi's whole life is an oxymoron; the tautology in the title I've chosen for this article illustrates that. The Daily Telegraph post below that I discovered (thanks to Don Philips) is probably the most dispassionate and professional coverage of James Randi I've ever seen in the mainstream media. It's about the only one which even questions his status as The... Last... Word... in what is or is not genuine in the world of the paranormal. In his biopic An Honest Liar, see background links, we learn of Randi's past. He was an eccentric and solitary youth, a homosexual in 1930's whom society dictated to hide that part of his nature. His passion for magic tricks led him into a career as a stage conjuror where he swore he would never pretend that his sleights of hand were true supernatural powers. He supposedly "fell in love with the truth". However, as the background links show, he has a shadow side to his nature which he carefully packs out of sight when his public persona is on display. In his Daily Telegraph article Will Storr bravely breaches some of Randi's most famous misdemeanours. I have no problem with anybody questioning climate change, indeed I do so myself, see: http://hpanwo-voice.blogspot.co.uk/2014/06/anything-to-save-planet.html; in fact my problem was that once some of the Skeptic congregation had sat him down and given him a talking to, Randi recanted. If he'd stuck by his guns like Perry deAngelis or Penn and Teller I'd have thought more of him. I'm not surprised that Randi has a soft spot for social Darwinism; he is known to be essentially a misanthrope whose skill in the world of performance and publicity allows him to keep it under a large bushel most of the time. He can be very polite, even charming, any time he needs to be, but I've heard he can be deeply malicious and capable of very antisocial behaviour when the cameras are switched off. It's important to remember that James Randi is not really a person, he's a product; like Coca Cola or Persil washing powder. This product is bound to have an exceptionally high IQ and to have learnt Egyptian hieroglyphs by the age of twelve, an incredible feat of intellect which ought to have made him world famous in itself. His parents never named him "James Randi"; he was christened Randall Zwinge and only took on the stage name by which he's known as an adult. Will Storr is a Skeptic himself, but still retains the intellectual integrity to be a Randi iconoclast, see: http://www.telegraph.co.uk/culture/film/film-news/11270453/James-Randi-debunking-the-king-of-the-debunkers.html.

He has looked into the various allegations of fraud by several non-Skeptics who have had dealings with Randi. Storr doesn't say it outright, but this obviously includes applicants for the Million Dollar Paranormal Challenge; details I've compiled myself can be found in the background links. Storr writes in length about the short-lived collaboration between Randi and Rupert Sheldrake which ended acrimoniously when Sheldrake discovered that Randi lied. Sheldrake is a properly qualified scientist who is completely willing to work alongside Skeptics who play fair, and he has done so many times with Richard Wiseman and Chris French. Sheldrake's most famous experiments involve testing dogs which appear to have psychic powers. Randi deliberately misrepresented this study to his own audience for an article in a dog-owners' magazine, see: https://www.youtube.com/watch?v=YB3SAD-gHTc. When Storr confronted Randi personally over his conduct in relation to Sheldrake's work Randi prevaricated and evaded. Randi also has a nasty habit of pulling very elaborate and high-profile hoaxes on people to supposedly show them up for being dupes and therefore encourage people to engage on more critical thinking; personally I think he's just indulging the very prominent sadistic side of his personality. This would be my assessment even if he represented these little pranks honestly, but he does not. His own media reports grossly overplayed the impact his "Carlos" hoax had in . This was an incident in which he employed Jose Alvarez, real name Deyvi Peña, to impersonate a mystical channeller. Alvarez is an artist and actor who is based in the offices of General Dynamics, see background links. However other sources paint a very different picture of Randi's glorious coup; few people were impressed with "Carlos" and far more were sceptical of him than Randi has admitted. Storr doesn't mention it, but the same goes for the Project Alpha hoax. In fact Nexus magazine published a report with an alternative view a few years ago: 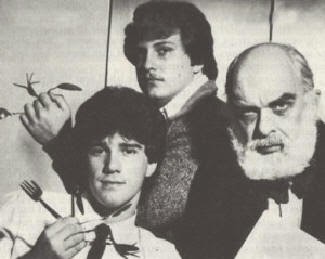 Project Alpha
Today a reader, Travis, asked me about Project Alpha, the famous episode from the early 1980s in which super-Skeptic James Randi arranged for two young magicians to infiltrate a parapsychology lab in order to confound the researchers. Over the years, this strange incident has assumed almost legendary proportions in the minds of some Skeptics and reporters, who claim that the researchers were totally fooled. Here, for instance, is the way the story is told in Las Vegas Style magazine, with my comments and corrections in brackets and in bold font:
By 1979 BANACHEK [one of the magicians in question, whose real name is Steve Shaw] was starting to draw national attention as a gifted performer in extra sensory perception crafts. That was also the year that McDonnell-Douglas Aircraft awarded a $500,000 grant to Washington University in St. Louis for the establishment of the McDonnell Laboratory for Psychical Research. [Incorrect - the grant was not bestowed by the corporation, but by James S. McDonnell as a private gift.] The lab was supposed to come up with evidence that things like bending a fork with your thoughts was a real thing. If the idea of spending half a million clams on fork bending seems just a little soft in the head, you're not alone. James Randi was an internationally known magician and an active investigator of paranormal claims when McDonnell-Douglas [sic] made the grant. He decided to send two young illusionists into the MacLab to debunk it. BANACHEK was one of the illusionists.
For three years [he] was subjected to every test the pros could come up with to prove he had authentic psychic powers. He bent things, burned things, moved things and knew things. He passed every test with flying colours [false - see Thalbourne's article, linked below] and at the end of the three year period the McDonnell Laboratory for Psychical Research proudly announced to the scientific community that they had the real thing in the form of BANACHEK [false - no such announcement was made]. OMNI Magazine did a spread on BANACHEK. Discover Magazine said "...his demonstrations were just phenomenal." Even the National Enquirer called him a "Prodigy. Nobody like him in his field."
Mid bow for the McDonnell folks James Randi drops his bomb that BANACHEK had been working for him for the past three years and what's more everything he did was an illusion. Remember? Illusions are ideas creating misleading appearances. And mislead BANACHEK did. You know you have a major coup in your pocket when you sting the National Enquirer. [Really?] The guys at the Laboratory for Psychical [Research] were crushed. [False - they had already suspected Shaw and his partner of fraud, and had dismissed them both more than a year earlier.]
I guess Las Vegas Style subscribes to the motto "print the legend." The actual facts behind this case are thoroughly presented in a paper I found online in PDF (Adobe) form: "Science Versus Showmanship: A History of the Randi Hoax," by Michael A. Thalbourne.
Originally I had thought of summarizing this article, but there's no need to do so because it speaks for itself. Thalbourne, who was a participant in some of the events, writes in a straightforward, engaging style and lays out the key facts and timeline in the clearest possible way.
The case is also covered, in less detail, by John Beloff in Parapsychology: A Concise History.
As both Beloff's and Thalbourne's accounts make clear, there is much less to Project Alpha than its cheerleaders would have us believe. Regardless of what the National Enquirer may have said, the researchers never publicly committed themselves to the view that the phenomena they observed were genuine. They remained properly cautious in their published remarks. Indeed, they privately came to the conclusion that the two test subjects were not worth studying any further, and politely terminated the experiments. Even so, Randi had the chutzpah to hold a press conference claiming that the lab had been successfully duped - a story that is repeated to this day.
To nail down this point, I direct your attention to the appendix that follows the bibliography in Thalbourne's paper, where the published conclusions of the researchers are reproduced. This document is dated , more than one year before Randi's January, 1983, press conference exposing the hoax. Regarding the test subject Mike Edwards (Shaw's partner in trickery), the researchers write:
The outcome of this research is suggestive of psychokinesis but inconclusive; due to its exploratory nature ... ordinary explanations exist for these effects, given the conditions under which they have been observed. Thus, although several events of interest have transpired, we do not claim that evidence conclusive of "psychic ability" has yet been demonstrated in our research. [Emphasis added] [Thalborne article: http://www.aiprinc.org/para-c05. Thalbourne_1995.pdf Source: http://michaelprescott.typepad.com/michael_prescotts_blog/2007/03/project_alpha.html.

These various tableaux of Randi's career are not impartially factual; they are a highly slanted fictional account based on real events. If you ask anybody else involved they will usually give you a very different story. Yet few people question them, whether mainstream media representatives or members of the Skeptic movement. When somebody does, Randi's hubris is laid bare for all to see; maybe because Storr is a Skeptic himself he was able to penetrate Randi's inner defences and find a way of engaging that secret inner world he seems to operate in with his hundreds of collaborators, both knowing and unknowing. It is vital to do some background research whenever you hear or read anything by James Randi. Randi is, by his own admission, an expert at chicanery and illusion. How do you know that he is being an honest liar even when he says he is? The good news is that it appears his house is falling and you'll see in the background links below. What that will mean for the future, I'm not sure; but the understanding of the true nature of the Skeptic establishment can only aid the quest for a positive outcome.
See here for background: http://hpanwo-voice.blogspot.co.uk/2014/11/randi-in-crisis.html.
And: http://hpanwo-voice.blogspot.co.uk/2014/11/james-randi-and-military-industrial.html.
And: http://hpanwo-radio.blogspot.co.uk/2013/06/programme-48-podcast-steve-trueblue.html.
Posted by Ben Emlyn-Jones at 00:11

Ben the skeptics are just carrying on business as usual in that newspaper column. They don't seem to know their empire collapsed. Randi effectively deposed. I'm pondering whether their business name JREF may be deregistered. I dont know if the owner of a business name can be sued.

Great article above Ben. Quite a thorough examination of the systemic "fraudulent claims of fraud" by JR for his entire career. He is about the 10th magician to do so.

Thanks, Steve. This is an excellent sign of the times. What was once unquestioned and secret about the Skeptics is now going public!