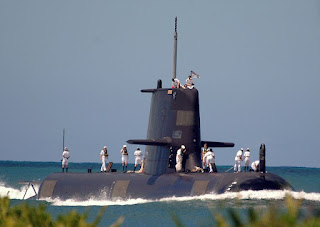 On the domestic front, is going full fash. It has clamped down on "vaccine-hesitant" people with coercive regulations and black propaganda in the media. They're even shooting puppies! As one Australian journalist recently quipped: "We Aussies may be descended from convicts, but we're also descended from their gaolers." Source: https://odysee.com/@lotuseaters_com:1/australia-has-fallen:6. At the very same time has joined a new military alliance called AUKUS; this stands for ", , US". This pact with the and the has come into immediate effect with radically rethinking its defence policy. The Royal Australian Navy currently operates six Collins-class submarines which are now aging and in need of replacement. In 2015 they signed a deal with the French film Naval Group to build replacement vessels; not six this time, but twelve. This reveals that was upping the ante that long ago. However, just last week, out of the blue, the Australian prime minister, Scott Morrison, cancelled the project. This is not to reduce maritime defence, but to expand it, because under AUKUS, the country now wants a fleet of nuclear-powered submarines instead of the "Attack" programme Collins replacement. This has angered enormously because the Attack programme was worth over £90 billion, the most expensive military contract in Australian history. went as far as to recall its ambassadors. Instead companies in the and will build a number of nuclear submarines for ; we're not sure how many yet. Source: https://www.pm.gov.au/media/joint-leaders-statement-aukus.
This is astounding. Just recently I was watching a video about the Collins-class; as a former naval trainee I maintain an interest in the subject, see: https://www.youtube.com/watch?v=WKxFWbhNLG0. The video rules out a nuclear replacement and was certain the Attack programme was the next step. This sharp U-turn indicates a change of strategy on a global scale. is in an important geographic location being between the Indian and Pacific oceans. This region is obviously dominated by and the only reason to bolster up 's armaments must be to challenge Chinese hegemony. There are even rumours of a "global navy". Right now Australian military officers receive Queen's commissions which means they are interchangeable in terms of personnel with the or any other state. Australians regularly exercise with British and other Commonwealth forces. The video states that does not have the industrial infrastructure to build and maintain nuclear-powered submarines or indeed any kind of nuclear-powered ship. It is a very specialized type of engineering. However the new subs are planned to include reactors with an exceptionally dense core, one that will not need to have its fuel rods replaced within the estimated service lifetime of the vessel. This lowers the maintenance complexities enormously. currently does not have any nuclear weapons and has no plans to change that policy... for now. At the moment it says its new subs will not carry nuclear weapons, but I have a feeling by the time they are built, they will. The reason nuclear submarines are preferable is because they have the complete freedom of the undersea world whereas diesel boats like the Collins- class have to sail on batteries while dived. Their speed and range is limited and they have to surface, or at least put up a snort mast, continuously to recharge their batteries. Diesel subs are capable of all the same missions nuclear subs are, except sailing under the polar icecaps; but when it comes to fast, long distance open ocean transit involving anti-surface or antisubmarine warfare, nuclear boats are far better. There is a trade-off in terms of noise emission and size which is why diesels are still the best option for inshore reconnaissance, intelligence gathering and "cloak and dagger" operations; but the Aussies don't seem to mind that right now, see here for more information: https://hpanwo-voice.blogspot.com/2014/12/strange-submarines.html. The Prime Minister Boris Johnson is delighted because of the jobs prospects. That's ironic considering he's spent the last eighteen months destroying British industry, see: http://hpanwo.blogspot.com/2021/02/coronavirus-portal.html. However, I see his point. The Australian submarines will be constructed by BAE in ; and the reactors will be built at the Rolls Royce plant in . AUKUS represents the first time submarine nuclear power technology has proliferated since the shared it with in the 1950's. The launched the first nuclear boat, USS Nautilus, in 1955 and has only let one other nation into this exclusive club. , and also developed nuclear submarines without American help; how much was devised by their own nation's engineers and how much was stolen by spies is a matter of conjecture. The Australians appear to be in a hurry. They have talked about leasing or even buying older nuclear submarines from the because they can't wait until their own new ones are built. The response to this from has been predictably chilling. Not the kind of people to mince their words Victor Gao, the vice-president for the Centre for and Globalisation, asked the Australians: "Do you really want to be a target for a possible nuclear war?" Source: https://www.theaustralian.com.au/inquirer/subs-pact-makes-us-a-target-for-nuke-attack-gao-figure/news-story/b2bab6a6a154cfd7571d45b1e18442fa. At the same time , never a bastion of democratic virtue, has banned all cryptocurrency. This has caused Bitcoin to drop in value by 8% which is unsettling for a product with a reputation for having a very stable price, see: https://news.sky.com/story/china-announces-complete-ban-on-cryptocurrencies-12416476. I feel like new battle lines are being drawn for a new global conflict in this century on the scale of the Cold War in the last.
See here for more background: https://hpanwo-voice.blogspot.com/2015/07/trident-is-just-for-show.html.
And: https://hpanwo-voice.blogspot.com/2013/07/replacing-trident.html.
And: https://hpanwo-voice.blogspot.com/2018/01/was-hawaiian-missile-alert-real.html.
Posted by Ben Emlyn-Jones at 18:31

Very interesting report. Australia's proximity to and potential control of the Indian Ocean is key. Have you heard of Hillegom, Ben? (The a mysterious underwater trench adjacent to Amsterdam Island.) They seem to have an unhealthy interest in this region.

Hi Laurence. No, I've not. I wonder what's so interesting about that location.

Of course! It may well be connected to MH370. I wonder if they'll find it. If they do, will they tell anybody?