Trident is just for Show 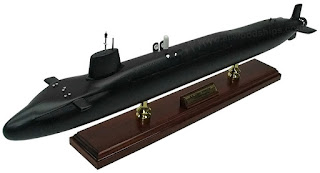 Despite many claims to the contrary, I think the days of 's independent nuclear deterrent are coming to an end, at least in terms of its strategic submarine-launched variety, the only force at present. See background links below where I've covered Trident in the past. There are more than one insoluble factors contributing to its inevitable demise. The submarines and missiles themselves are getting old. Trident was brought in to replace the original Polaris system in the late 80's and early 90's when the Cold War was already winding down. Polaris itself had been in operation since 1968 when the Cold War was in full swing and showed no signs of ever ending. If the deterrent is to continue a completely new fleet of ballistic missile submarines will have to be built, at least four vessels, and a dozens of new missiles, at the cost of twelve to twenty billion pounds. This expenditure for such a product will be such a red hot political potato that it could be beyond the government's ability to grasp. The second factor is the inevitable independence of . In the last general election the Scottish National Party gained a virtual monopoly north of the border, occupying all but three seats. There is no way UK nuclear weapons could remain on Scottish soil with independence, or even with much further increased devolution, in any form it takes. This is one of the prime issues Scottish nationalists have always campaigned on. To move Trident to a new location in and would be financially and politically out of the question. We also have to account for the revelations of the whistleblower William McNeilly, see background links. These have been incredibly damaging for the government's reputation. It has recently been revealed that AB McNeilly has been discharged from the Royal Navy, however no further action is planned to be taken against him. I find this strange; I suspect that the MoD wants to move on as quickly as possible. Any more publicity would be even more embarrassing for them, see: http://www.theguardian.com/uk-news/2015/jun/17/trident-whistleblower-william-mcneilly-discharged-from-royal-navy. The RN have casually dismissed his claims, much to the chagrin of anti-nuclear activists and the SNP. A highly respected senior officer, Major General Patrick Cordingley, who commanded forces in the 1990 Gulf War, has spoken out with his view that Trident is militarily worthless. He believes that the real motive for the government wanting to maintain it is nothing more than political prestige. In other words, showing off to the neighbours, see: http://rt.com/uk/269356-trident-outdated-military-nuclear/. He's probably right, knowing the mindset of the David Cameron Government plc. It wouldn't be the first time that heavy armament has been used as a conceptual symbol rather than as a practically effective weapon; "psychological warfare" in the very literal sense. The 2012 Olympics are a good example, see: http://hpanwo-voice.blogspot.co.uk/2012/05/london-olympic-security-measures.html. France is the closest country to Britain geographically and it has its own version of Trident, FOS- Force Océanique Stratégique which includes Le Redoutable and Triomphant- class SSBN's and their missiles. We don't want to be outdone by the Froggies now do we? This is probably why tried to start a nuclear-powered submarine programme in the 1980's; because of its rival the 's huge fleet of such vessels. So based on recent events I feel more optimistic now that we'll soon see the end of Trident. The system will probably go on for a few more years until the Vanguard-class boats are no longer seaworthy and then end. Smaller scale tactical nuclear weapons might be boosted as compensation; for example those delivered by submarine-launched cruise missiles... unless of course there is a war, or one of the maritime catastrophes William McNeilly has warned us about actually happens.