Greece, Get with Russia! 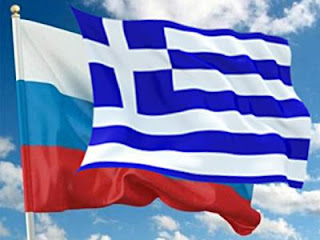 A short while ago when the crisis in came to a head, I wrote a post with suggestions for Alexis Tsipras, the Greek president. I advised him to purposefully default on his loan to the World Bank and European Central Bank and instruct his treasury to start printing greenback Drachmas which would replace the Euro as the country's legal tender. He should then deploy the army to the borders in case anybody tries to pay him a visit in order to redeem the non-existent fiat-currency allegedly owes, see: http://hpanwo-voice.blogspot.co.uk/2015/07/greece-decides.html. The Greek people voted "no" very decisively in that referendum. However this has not stopped Tsipras doffing his cap once again to his creditors and their allies in his stubborn insistence on avoiding the "Grexit"- Greek exit of the European Union, keeping in the Eurozone and EU. It has somehow not occurred to him that his entire economic policy is self-contradictory. He seems to be running with the fox and chasing with the hounds simultaneously. Therefore, at the time of writing, EU negotiators are heading to to carry out talks on the country's future in . One offer that will be tabled is another bailout for , a third one, up to 86 billion Euros. This might reduce short-term tensions, but at the cost of deepening the long-term crisis. The Greek parliament have already been levered into announcing a series of tough new Austerity packages, the very thing Tsipras' Syriza party took office to avoid. There's been a huge increase in VAT, up to 23 % on some processed foods, 13% on gas, electricity and water, and 6% on medicine. Also the 30% VAT discount for the islands in the has been scrapped; this threatens to bankrupt the economies of those isles, dependent as they are on cheap tourism. Also the retirement age has been raised, very significantly because it used to be the lowest in , from 55 to 67. Further strictures have been placed on customer finance to prevent runs on the national banks. This has all been met by understandable and justified anger from the people. Trade unions are threatening a general strike.

Fear has gripped , as it would any country in that situation. is going to be subjected to similar scare stories as our own EU membership referendum gets close; will be held up as an example; "so perish unbelievers!" Most Greeks still support Tsipras' attempt to pacify the Eurozone dragon instead of stabbing it with a sword. At the same time there are intriguing signs that the Greek government is considering an alternative, one that I also suggested in the previous article about . A few days ago the Greek newspaper To Vima reported that Alexis Tsipras had had a meeting with 's president Vladimir Putin asking for $US 10 billion to fund a new system of Drachmas. has joined most other nations in condemning 's military activities in ... or supposed activities, see: http://hpanwo-voice.blogspot.co.uk/2014/07/putin-did-it.html. This has been dismissed by much of the media as a "conspiracy theory", the pattern emerges once again, see: http://greece.greekreporter.com/2015/07/21/tsipras-allegedly-asked-russia-for-10-bln-to-print-drachmas/. The idea has also been proposed that a inside the EU is an asset to , see: http://blogs.ft.com/the-world/2015/07/greece-is-more-useful-to-russia-inside-the-eu-than-out/. This is this the same EU that is an important financial partner of the American-based International Monetary Fund that is currently trying to sabotage 's economy; see background links below. As I said in the article on the Greek referendum above, Greece is going through a crisis, but also an opportunity. It is being pushed up against the wall and being faced with a choice of submission or resistance. It can't put off that decision any longer, unlike most other countries who are simply not even considering the question. is a small country, once home to one of the foundational civilizations of ; it is now an impoverished backwater. However it could rise up from the ashes and make the gods of proud. Of course it can't do it alone and will need support. I think it should certainly create ties with that other great recalcitrant on the opposite corner of Europe- Iceland. That heroine Johanna Sigurtharddottir and the team who saved her country. is another country which has fallen out of favour with the globalists in a big way. If does decide to form stronger ties with then this would be excellent news. They already have plans to build a new gas pipeline from across the region to ; let it be a symbol of a new "coalition of the unwilling". is one of the new superpowers of this new multipolar world; at the moment a war is being waged against it using every method except actual bullets flying, see background links below. They're in the same boat as and so should stick together. I'm looking forward to seeing if this so-called "conspiracy theory" is confirmed or found to be false; the former I hope. I shall report on this subject again soon.
See here for background:  http://hpanwo-voice.blogspot.co.uk/2015/02/you-really-dont-like-russia-do-you.html
And: http://hpanwo-voice.blogspot.co.uk/2015/02/will-russia-be-blamed-for-jihadists.html.
And: http://hpanwo-voice.blogspot.co.uk/2014/12/strange-submarines.html.
Posted by Ben Emlyn-Jones at 19:02

Excellent piece. The geopolitics are interesting here. A Russia to Crimea link is straightforward, requiring a 3km bridge across the Azov Sea. However, Greece does not have a coast on the Black Sea. Sofia is clearly indisposed to cooperation with Russia (EU and NATO membership) as, one suspects, Bucharest would be. In my opinion, there is no way around this. However, I believe you hit the nail on the head concerning the importance to Russia of having a friendly EU member state. Perhaps this explains Tsipras's volte face.