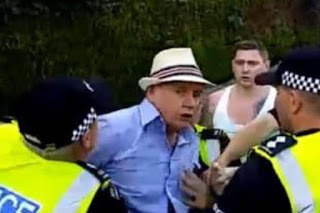 Yesterday afternoon a friend sent me some shocking material via my Facebook feed, a series of short videos filmed in the streets of , . They showed that the police had cordoned off an entire street to allow bailiffs in to repossess Tom Crawford's house. A group of protesters were trying to stop them again, like they had successfully twice before. Sadly this time there was very little prior notice and so there wasn't time to rally up as many people. There were far fewer than the seven hundred plus supporters who packed Fearn Chase Close a few months ago, see background links at the bottom. I'm very sorry I couldn't get to the protest myself. Tom's well-wishers were kettled in a pub carpark while bailiffs moved in. Tom was arrested and denied medical care. They were followed by a removal van from Cookson & Son Movers and Storers Ltd of Lytham St Annes, who took away all Tom's belongings from inside the house. You know not to give them any business now, see: http://cooksonmoving.co.uk/. It's sad that Lytham St Annes is the home of the Probe conferences, yet none of these local events have influenced this company, see: http://hpanwo.blogspot.co.uk/2014/10/probe-autumn-2014.html. Tom Crawford has been fighting a battle with his mortgage lenders for eight years because of the unlawful terms and conditions they imposed on him after the initial agreement; see background links. He has been ill, having also to deal with cancer and haemophilia, and has a large family who have lived in that house all their lives and worked hard for it. Tom's daughter Amanda Pike has once again made a statement:
"Not actually been to sleep so excuse the state of this, but we don't actually know what's gone on, why they did it or why they refused us any paperwork to see which in itself is against the law. What I witnessed yesterday was terrorism, pure and simple. My not yet in her grave, our family pet with maybe only hours to live now. We were threatened, attacked, assaulted, insulted, laughed by 'bailiffs' court staff, 'security staff' and most shocking of all the police, all day long. Even while I was sobbing I was told we were boring by a police man; God the list is endless. But the crooks of the matter are. We read out to them verbatim the actual laws being broken. Which I've lost count of. They'd cover many pages. The people there to protect us and be impartial were totally ONLY on side with the bank... However, with all this said its only the beginning. Now it's a criminal matter, we have plans. Things will get going again. At the end of the day we have every bank docket to prove that we paid over 130k-ish on a 41k mortgage along with all our other evidence. If that in itself, apart from the rest of the matter, isn't enough evidence for you I don't know what is. It was proven in court we did not change the mortgage it was proven the judge could NOT find the figure the bank were claiming we owed, it was also proven that we did not agree for it to be changed, and that the bank did not change it back to its original agreement. Two parties HAVE to agree to change a contract that is FACT and was agreed upon in court. However this is all a side matter though, as NO PROCESS was followed. Literally none. Grater issues and laws have been broken. So once we get it further they are going to have to prove what they are saying. Considering they brought zero evidence to the previous hearing well that will be very interesting won't it? They can't and they know it. Anyway life's a fucking ball bag of a bitch sometimes. I feel so so sorry for my mum, dad, sister and brother, but you know what I couldn't be bloody prouder. One day all will see. The criminals may have won yesterday but not for long. THANK YOU SO SO MUCH for the messages of support. You'll never EVER understand what it means to us. Love you all and THANK YOU for sticking with us xx."

I'm also still not entirely sure why this has happened. The last thing I heard was what Amanda just said, Tom had a hearing two months ago and it went very well. His alleged creditors, Bradford and Bingley, never even dared turn up to court. There was even talk of him having "won!", see background links. I'm sure the answers are coming and I'll keep you posted. The saddest part was how this act of legalized robbery was carried out through robotic human compliance. Not only the heartless and gutless bailiffs were responsible, but they were aided and abetted by the state in the form of police protection. A couple of dozen officers held back the protesters so the house-thieves could do their sordid work. By rights those officers should be arresting the bailiffs! How much did this crooked operation cost the taxpayer? Police constables are servants of the people; their job is to protect them from criminal danger. The police were never intended to interfere in civil disputes and escort corporate money-grabbers. Every one of them betrayed their oath of office yesterday, just like they did over Carla Buckle, see: http://hpanwo-radio.blogspot.co.uk/2015/03/programme-131-podcast-carla-buckle.html. The New World Order would be completely impossible if it wasn't for this tendency towards groupthink and conformity, either learned or innate. "I'm just doing my job, mate!" is the overused phrase and universal cop-out. I could of course list any number of abominable acts carried out by individuals who were just "doing their job!" You've probably thought of several while reading that sentence. George Orwell understood this well when he wrote his novel Animal Farm. What happens in the plot is that a farm is taken over by the animals and the human farmer is kicked out, but the pigs quickly rise to positions of authority and become rulers who are just as bad as the old human farmer. The story is an allegory of the Bolshevik revolution in and the subsequent rise of Stalin, seen from Orwell's Trotskyite or democratic socialist perspective; but some of its themes are more widespread. One of the most interesting and poignant scenes in the book is when Boxer, an elderly cart horse and the hardest working animal on the farm, falls ill. Instead of recognizing his dedication, arranging veterinary treatment for him, and looking after him for the rest of his life, the pigs sell him to a butcher and he is taken away to the abattoir. In the scene where the horse is driven out of the farm, the vehicle the butcher uses is a horse-drawn one. I found this curious because the book was written in the early 1940's when modern motorized lorries were in common use. However there's a distinct reason why Orwell chose to make Boxer's death-wagon a horse-drawn van. The other animals see the butcher's signboard on the van and realize what's happening, and they call after the vehicle warning Boxer and urging him to escape. But they also appeal to the two horses pulling the vehicle: "Comrades, comrades! Don't take your own brother to his death!" But the two horses pulling the van just keep on trotting along, obediently doing their jobs, even though a day might come when they themselves could be sold off to the butcher just like their victim was. This is what I see now with these policemen. It's also been reported that some of the police were glorifying in what they'd done and took selfies while guarding Tom's home. We also heard that Tom's dog died as a result too.
See here for background: http://hpanwo-voice.blogspot.co.uk/2015/05/tom-crawford-wins-in-court.html.
And: http://hpanwo-voice.blogspot.co.uk/2015/01/je-suis-tom.html.
Posted by Ben Emlyn-Jones at 17:58

Absolutely Gobsmacked!!!..
Why the hell, would they do, such a heartless n' pointless thing??..
Makes no sense at all?..
Couldn't they have come up with an, agreed amount? For Tom & his family??..
Heartless, "Fecking" heartless!!!!..

My thoughts n' respects, are with Mr.Tom Crawford & his family..

May you turn this decision around, n' get your home back!!..

Yours Most Sincerely & Respectfully.. Mr.VinnyM vox

It's an utter disgrace. One of the worst things I've ever witnessed.

Tom made this mess for himself, and ignored numerous chances to make a reasonable deal with the lender. Tom and Sue had an Endowment mortgage, but surrendered the endowment policy after a couple of years (which breached the terms they had agreed with the bank!). This effectively meant they changed their own mortgage to Interest Only, with no repayment vehicle.

Subsequently the bank discussed this with them and asked them to change to a repayment basis, which was refused by the Crawford's and so not done by the bank.

Everything the Crawfords have paid so far has been interest, with the original debt left outstanding, exactly as per their original agreement with the lender. Tom then stopped paying because the original 25 year mortgage term was up, and forced the lenders hand to this.

If he had acted sensibly he could have remained in the house at a lower cost than renting somewhere similar, or probably walked away with ~£100k in equity.