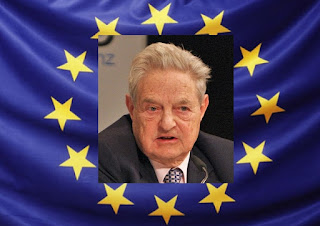 George Soros is a billionaire powerbroker and strategic bankroller of authoritarian leftist and pro-globalist political movements. Like all these powers behind the throne-type individuals he is very old and will probably live for a long time to come; cases in point: David Rockefeller, Henry Kissinger, Prince Philip etc. This particular Grima Wormtongue has been very active as of late, funding Hillary Clinton's presidential campaign; thankfully it was unsuccessful. He also holds the purse strings of several groups that have been designated domestic terrorist organizations in the , at least with some of their factions, most notably Black Lives Matter and Antifa. Therefore it came as no surprise at all when I found out that he has made a donation to the pro-EU Best for campaign group. The chairman of the campaign, Lord Malloch-Brown, described Soros as a "valued supporter". Best for was co-founded by Malloch-Brown and Mzzzzzzzz Gina Miller as an attempt to thwart Brexit by forcing Parliament to vote on the deal negotiated with the European Commission. Another tactic they may try would come after Brexit when they will try to make rejoin the European Union. See here for their website: https://bestforbritain.org/about. Source: http://www.bbc.co.uk/news/uk-politics-42984594. Remoaners see themselves as the underdogs, the champions of the common folk of against the conservative old boy network of the British establishment, the real power in this nation. If the involvement of George Soros in their cause does not shatter that delusion then nothing else will.
See here for background: http://hpanwo-voice.blogspot.co.uk/2016/11/brexit-betrayed.html.
And: http://hpanwo-tv.blogspot.co.uk/2017/03/richard-dawkins-patronizing-git.html.
And: http://hpanwo-voice.blogspot.co.uk/2017/03/article-50-at-last.html.
And: http://hpanwo-voice.blogspot.co.uk/2017/05/lib-dems-instruments-of-treason.html.
And: http://hpanwo-voice.blogspot.co.uk/2016/09/brexit-awaits.html.
Posted by Ben Emlyn-Jones at 17:25

Hi Ben, I am an 18 yr old 6th former and I am taking politics A level exams in the summer. I came across you because we have been asked to write a short essay on George Soros, max 2000 words. It is about his influence over the years in investing and backing certain political parties. Is it ok please if I cite your blog as a reference as I think what you have to say is really useful, very useful actually? I always make sure all bloggers are happy to be cited. Plus, we have to practice Harvard referencing for when we go to University as they expect it in every piece of work, but you know that as I expect you have a good degree, you must have to know what you know!

Hi Ben, my name is Declan and I live in Belfast. Im interested in the new world order but I have read mixed things on what it is. Could you please either explain in brief or signpost me to a HPANWO article where you explain what it is? I would be eternally grateful. Best regards

Hi Declan. Sure. This is a good brief introduction:

Dear Ben, Would you be interested in becoming a lecturer/tutor at some point in your career? More and more Universities are running modules and courses on Conspiracy Theorists and the psychology behind them. If I understand correctly you have no formal academic qualifications, yes? If so then great, that is what we want, someone raw who has graduated through the University of Life. I am just a grad psychology student from Loughborough University but when I see you talk I have to watch the whole thing because you encapsulate me so much. Which is why I ask if you would ever be a lecturer as it would be quite something. When I finish my masters degree in the summer next autumn I will be undertaking my PhD and my tutor and mentor will be Chris French. You probably have never heard of him but he has a very good record of getting students through their PhD at the first attempt. Anyway, I might need to ask for you permission over the next few years to borrow HPANWO goodies. I was browsing today and it is one hell of an impressive body of work you have there.

Hi Carson.
Sure, I'd be glad to help. You can email me details at bennyjay74@gmx.co.uk.
I do know Prof French actually and I really like him. I spoke at one of his conferences.
Best wishes
Ben