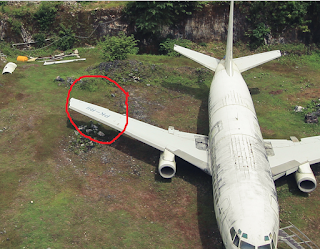 Yesterday I posted an article about an abandoned aeroplane on .
See here for essential background: https://hpanwo-voice.blogspot.co.uk/2018/02/mysterious-abandoned-aeroplane.html.
Shortly afterwards somebody on Facebook contacted me with some additional information. In one of the photographs taken by the travel bloggers Katja and Mic, see: http://wejusttravel.com/abandoned-plane-bali/, the registration number of the aircraft can be clearly seen on one of the wings; it is "PK-RII". I really should have spotted that myself. My contact, who wishes to remain anonymous, then went to an aviation enthusiasts' website and looked it up on their database; and, lo and behold, the details of the aircraft were there, including its origins, ownership and service record. It is a Boeing 737-200 and is a very old model, being delivered from its factory in in 1983. It then was used by the based Dan-Air and was twice leased to the Israeli Arkia airline. Its final operator was Mandala Airlines, a low-budget carrier based locally in . If you look closely you can just see the logo on the tailfin, although it has considerably faded, or been painted over. Mandala was declared bankrupt in December 2014, which could explain how some of its fleet were acquired by private individuals, and PK-RII would have been difficult to sell to another airline because of its age. According to the website "the airframe is preserved in Nusa Dua, ". Source: https://www.planespotters.net/airframe/Boeing/737/PK-RII-Mandala-Airlines/PQMKsZyn. The mystery is solved... partly. I still question how the airliner could have been placed where it is. Another odd factor is a report found on a professional pilots' forum by the same researcher. It talks about a plane crash that happened at airport in in 2006. A Mandala Airlines 737-200 skidded off the runway in heavy rain. It doesn't state whether there were any casualties, but the plane was retired from the fleet soon afterwards. What's interesting is that the forum members mention that Mandala is a front for the military, see: https://www.pprune.org/rumours-news/256660-mandala-b737-skidded-off-runway.html. Mandala operated more than one 737 so we don't know for sure, but could this be the same aeroplane that somehow found its way onto the bed of a quarry on ?
See here for more information: http://hpanwo-voice.blogspot.co.uk/2015/08/mystery-soda-machine.html.
And: http://hpanwo-voice.blogspot.co.uk/2014/11/somerton-man.html.
And: http://hpanwo-voice.blogspot.co.uk/2015/05/mystery-object-found-inside-lhc.html.
And: http://hpanwo-voice.blogspot.co.uk/2013/12/mysterious-object-in-seattle-tunnel-dig.html.
Posted by Ben Emlyn-Jones at 19:32

PK-RIL skidded off the runway in 07 it looks like