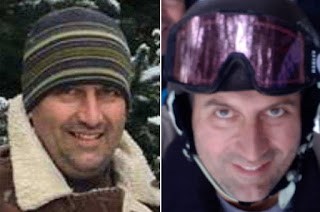 Constantinos Filippidis, known to his friends as "Danny", is a keen amateur skier. He travelled all the way from his home in in to the slopes of in to have some fun. However during the holiday his friends suddenly found that he had disappeared. They assumed he had accidentally skied off-piste and maybe had an accident, but they couldn't find him. They reported him missing and there followed a massive manhunt involving the mountain rescue services, police, Department of Homeland Security and over six thousand volunteers, including his friends. After six days with no trace of the missing skier, they feared the worst. Then news came through that a man had been found wandering the streets in a confused state wearing winter clothing, a skiing helmet and goggles. He was taken into care and quickly identified as Mr Filippidis. He called his wife and children, and there was much relief all round as the story ended happily... Well, not quite ended. The problem is that Mr Filippidis was not found in the vicinity of . He was found in ; that is almost three thousand miles away. Nobody knows how the missing man travelled so far and what had happened to him during those intervening six days. He is suffering from amnesia and later related only very vague memories of riding in a large lorry and sleeping a lot. He was taken to hospital and given tests, but he shows no signs of having experienced a head injury; his fuzzy state of mind was literally his only symptom. He has never suffered a major head trauma in the past and has no history of mental illness. The mystery remains unsolved; the authorities have stated that the circumstances of Filippidis' disappearance remain under investigation. However, there are several clues that have surfaced indicating that what happened to the skier has similarities to the disappearance of Travis Walton; SecureTeam10 have hot hesitated to point this out, see: https://www.youtube.com/watch?v=pSb_vUj9SRg. Travis Walton is a lumberjack who went missing for five days after encountering an unidentified flying object in 1975, see: http://hpanwo-tv.blogspot.co.uk/2015/10/ufo-disclosure-2015-truth-or-greer.html. Source: https://nypost.com/2018/02/14/missing-skier-has-no-idea-how-he-ended-up-on-the-other-side-of-the-country/.

There's no immediate reason to suspect a UFO-related conclusion; no UFO's were seen by the witnesses to the disappearance. However after the elimination of other possibilities more unusual ones must be considered. How did Constantinos Filippidis vanish and reappear in these circumstances? He could not have flown because he had no money or travel documentation on him; these items were all locked in the hotel safe. Even if he had them how would he have reached the nearest airport? His car was where he had left it in the hotel carpark. He could not have walked any great distance at that time of year because the conditions were far too cold. If his ragged memories about being given a lift in a lorry are real then how did he reach the nearest road to be picked up by said lorry, and why? If he had no head injury why would he have ended up in the state of mind that would make him do such a thing? Why did the lorry driver not alert the authorities and take the skier to hospital? Was this some kind of kidnapping? I looked up more information about and did not find that it had any reputation for creepy goings on. Other places do; like for instance, where a number of winter adventurers were killed in mysterious and gruesome circumstances in 1959, see: http://www.richplanet.net/starship_main.php?ref=175&part=1. is renowned as one of the most challenging skiing locations in the world. It was used during the 1980 Winter Olympics. David Paulides is a former policeman who has researched the worrying trend of people going missing in the remote areas of , see: http://www.canammissing.com/page/page/8396197.htm. Sometimes these people do indeed reappear later with no memory of what happened to them; could Mr Filippidis be one of them? Others are never seen again. There are additional strange factors in this story. Among the mountain rescue officers and volunteers who combed for the missing skier were agents from the Department of Homeland Security. Is finding missing people on skiing holidays normally part of their remit? If not then why were they involved this time? It has also been reported that Mr Filippidis had been given a haircut during his hiatus. He also had a new mobile phone in his pocket. If this is true then for some reason whoever cut his hair put his skiing helmet back on afterwards. Also wouldn't the phone be a useful source of evidence? These days, mobile phones can just about tell the police what you ate for breakfast. We shall see; I may post an update in more information come to light.
See here for background: http://hpanwo-voice.blogspot.co.uk/2014/11/somerton-man.html.
And: http://hpanwo-voice.blogspot.co.uk/2017/04/elisa-lam-update.html.
And: http://hpanwo-voice.blogspot.co.uk/2017/05/body-on-moor-update.html.
And: http://hpanwo-voice.blogspot.co.uk/2014/03/malaysian-airlines-370-found.html.
Posted by Ben Emlyn-Jones at 16:43