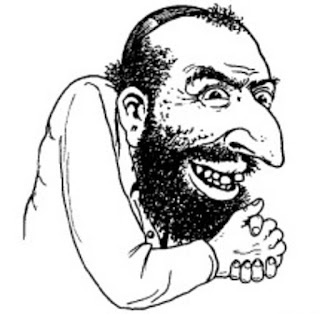 Hi Ben
Just watched the vid of your BBC gig. Wish I could have been in the audience. We would have had a good old chatter. I noticed you were clever enough not to say out loud what I'm 99% sure you were thinking. This whole debarkle (sic) is caused by these fucking commie Jews. They RUN the BBC don't they? The NWO is THEIR work. You know that don't you? You'll be interested in this (they provide a link to a far-right website). Between you and me, it's true eh? You can talk to me about it. It's OK.
Keep up the good work.

Hi.
Feel free to attend any of my future live events and we can have a discussion. I'm willing to talk openly about any subject. I don't agree though. The NWO is not the work of the Jews. I explain why this is in this HPANWO TV show: http://hpanwo-tv.blogspot.co.uk/2017/06/jews.html and this HPANWO Radio show: http://hpanwo-radio.blogspot.co.uk/2016/05/programme-188-podcast-jews.html.
Best regards.
Ben

I received no reply. It was only some time after this that I realized that the email sent to me may well have been an attempted entrapment. The person sending the email was one of my trolls. During the last fortnight I have experienced a massive full-spectrum multi-pronged troll attack. Three independent groups of trolls who previously were separate and who didn't even know each other have now come together and united into an alliance of hatred; hatred of me. The attacks of the last two weeks have been coordinated; see background links below for more details. The person who wrote that email was hoping that I would divulge privately to them that I really did think that Jews were the culprits behind the New World Order. They wanted me to reply: "Yeah, mate. Absolutely true. I wouldn't say this publicly but it is the fuckin' Jews! Hitler had the right idea..." or something along those lines. If I had done that my correspondent would have copied and screen-capped my email, and it would have been all over social media like the plague. Either that or they would have threatened me with it unless I did them "favours". This is a tactic Team Droike have used before. Unfortunately for them, it didn't work for two reasons. Firstly, I do not think the Jews are behind the NWO. Secondly, if I did I would have already said it publicly and so therefore the trolls would have had nothing to blackmail me with. Beware the trolls! They are cunning, venomous and ruthless.
See here for more information: http://hpanwo-voice.blogspot.co.uk/2017/01/is-david-icke-dangerous.html.
And: http://hpanwo-tv.blogspot.co.uk/2018/02/the-lies-of-marie-k.html.
And: http://hpanwo-tv.blogspot.co.uk/2018/02/confronting-droike.html.
Posted by Ben Emlyn-Jones at 19:45

i class you as good friend ben. its shame things like trolls and entrapment are something that has become something that we all have to watch out for.soon people wont be able to say anything without it being taken out of context or twisted. this is regular everyday happenings in the media and suchlike.

Thanks, Derek. That's true. The trolls are taking advantage of media sensationalism.

Things seem to be hotting up, the battle for control of the internet is now upon us & independent thinkers & alt news sites are all being squeezed. They don't even have to really think you are what they are saying, it's just a way of shutting you down.

I think that was the troll's hope, GGS. They don't care about censorship they just planned on taking advantages of the new internet regulations on "hate speech" to use them to attack me. If meaningless conflict is the only thing they crave, that's what they're going to get!

Hi Ben,
Love your work and HPAWNO is a great way to keep abreast of all the alternative views. Although I am starting to think that we need someone in incharge of this country that is going make Brexit work as May is always dithering. I have been thinking mainly John Redwood or Jacob Rees-Mogg. What do you think? Mogg is quite anti elite if you think about it and his views on foodbanks were spot on.

That reminds me, I've read your first Roswell serving and ordered the sequel but the bloody thing hasn't arrived yet and I'm getting delirium tremens lol, I need my fix of Roswell! I suppose the snow has slowed things down. Mogg would sort that out, or maybe a triumvirate of you, Icke and Nick Kollerstrom would be a fine set up to sort this bloody NWO out. Will your next Roswell be out before 2019? I hope it is. You should write a British version on Rendlesham Forest. Anyway, I expect you are busy. Thanks for taking the time to read a minions feeble words.

Hi Daisy. Glad you're enjoying the Roswell series, thanks. I hope to get the third installment finished this year.
I would like to see JRM as Prime Minister. Hope so one day.
Best wishes
Ben