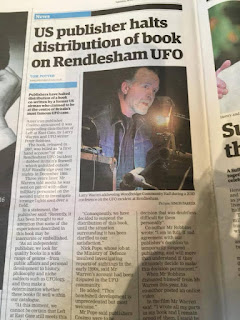 See here for essential background: https://hpanwo-voice.blogspot.co.uk/2017/10/the-larry-warren-controversy-part-25.html.
There have been no major updates since the last instalment in this series, at least none I can discuss publicly at this juncture. However I'm pleased to say that Gary Heseltine has done another excellent interview about the Rendlesham Forest Incident and its controversy, see: https://www.spreaker.com/user/unitedpublicradio/top-secret-news-radio-show-oct-26-2017-u. The LWHC have not gone away though, of course. In fact at the moment they are on the ascendant of their outrage sine wave, however their centre of gravity has shifted away from Sacha Christie for the first time. David Young is now the loudest and most aggressive cult member while their former leader has gone quiet. He posted a comment on one of my HPANWO TV videos in which I discuss my discharge from the NHS, Ben is Not an ODO, see: https://www.youtube.com/watch?v=k_0DaKQ_deA. The comment read: "Sacked porter now! LOL". Needless to say I deleted it and blocked him. There are many other examples of abuse towards Larry, myself, and any others who defy the doctrine of the LWHC. So perish unbelievers. I am focused at the moment on delivering the evidence in this series to reasonable people whenever the subject comes up. I've found there are people currently repeating a lot of the rhetoric of the LWHC without any apparent understanding of the facts involved. They have not been initiated into the inner temple of the LWHC, but they are acting as fellow travellers, appeasers, fence-sitters and general hangers-on. I have found that these people are willing to enter into an exchange of insults and personal disparagement, hence their extreme reaction to my Left at East Gate pic, see Part 25, but the moment I post them my evidence package they go quiet; in fact this happened only yesterday. The rational case against the LWHC truly is the ultimate conversation-stopper.

A newspaper called the East Anglian Daily Times has published an article that is clearly based on the senseless lies of the LWHC; it is not online but I include a photo of it above. I contacted the author, Tom Potter, but he told me he has been moved to a new department of the newspaper and instead directed me to talk to the east news editor Richard Cornwell. Here is what I said:
Dear Mr Cornwell
I was given your name by Tom Potter as the person to talk to about this. Following the recent article in your newspaper by Mr Potter about the book written by the UFO witness Larry Warren I think I should inform you that the accusations against Mr Warren are false. It is sad that his own co-author has failed to understand this. I can prove it because I have examined the supposed evidence against him and discovered that all of it is fabricated. Mr Warren has simply been the target of a smear campaign. The source of this campaign is a former friend and housemate of his with whom he had a very bitter personal dispute. Here is a link to a series of articles about my research; there is a lot of material here, but it is a detailed case and if you wish to contact me to clarify any matters I'd be glad to help: http://hpanwo-voice.blogspot.co.uk/2016/12/is-larry-warren-fraud.html Here is an article written by Gary Heseltine, a UFOlogist and former policeman, who has investigated the individuals behind this attack: https://www.facebook.com/heseltinegary/posts/1762150370480544
I'll be happy to help clarify this situation at any time. Feel free to contact me.
Best wishes
Ben Emlyn-Jones
After writing to him twice and waiting a week for a reply I phoned the newspaper's office and spoke to him. He told me he doesn't wish to pursue the matter any further and is not going to publish any follow-up stories. He says he is concerned about the "legal situation". I reassured him that the evidence I and others have gathered is correct and would pass the test of a court of law. I said I write for UFO Truth magazine which specializes in this subject. I've sent him my package again and asked him to read it and get in touch if he changes his mind. It looks like the case against Larry is all they're interested in promoting... or maybe it's all they've been told to promote. The article includes a comment by Nick Pope, a standard media cliché, but I can't help questioning if Pope provided additional advice. Mr Cornwell assured me that Tom Potter wrote the article himself, but I do wonder.
See here for the next part: https://hpanwo-voice.blogspot.co.uk/2017/12/the-larry-warren-controversy-part-27.html.
See here for more background: http://hpanwo-tv.blogspot.co.uk/2016/06/scottish-ufo-and-paranormal-conference.html.
And: http://hpanwo-radio.blogspot.co.uk/2017/05/programme-236-podcast-larry-warren.html.
And: http://hpanwo-voice.blogspot.co.uk/2016/09/truth-mobbed-again.html.
Posted by Ben Emlyn-Jones at 18:45

Ben, have you addressed this article yet? I’d be interested to know if you thought it was part of the LW ‘smeering’.
http://www.stevieray.com/Cobras%20guitar.htm

Hi Michael. Yes I have. This is one of several proclamations that have failed to lead to any criminal charges of Larry Warren.

So you’re following Gary’s way of thinking, or standard response, that if something hasn’t resulted in a court appearance and a conviction then it hasn’t happened, it must be a lie. Surely it must ring alarm bells for you. Forget for a moment the LW defence that it hasn’t resulted in a court case, I mean let’s face it, getting as far as a conviction is rare in most cases of the law and offending. I don’t think Harvey Weinstein has any court convictions, neither has Kevin Spacey, neither have there been admissions of any illegalities by both partys. . Gary above all people knows that a court conviction is the end of a lengthy process. Only a small percentage of cases end up in court. In fact almost everybody tries to avoid a court case. In this case this man is warning people about someone called LW. Can I ask you, do you think he’s talking about a different LW? If not then doesn’t this in any way ring alarm bells for you? May Pang was also involved in something similar with a person called LW. Whatever the truth of the RFI, now referred to as The Capel Green incident, ?, as far as the memorabilia cases go, I personally couldn’t ignore it all with the stock response there hasn’t been a court case. I’m surprised Gary solved any crimes if he really did think in such black and white terms,..ie .no court case means nothing to answer for.

Michael, I'm well aware that a court conviction is the end of a lengthy process, but doesn't that process BEGIN though? Yes it does. It begins with the police arresting and questioning the suspect. You know very well that if just a fraction of all that LW is accused of is viable the police would have done this long ago.

. Thanks for replying Ben. I’m just a bit bamboozled at how you can read Craig Hopkins’ open letter and dismiss it because LW has never been arrested. The police won’t knock on Mr Hopkins’ door asking if he has any matters he wants looked into, it’s up to him, and others involved, to bring them in. People don’t always go running to the police when they see wrong doing. CH chose to send out a pretty damning open letter WARNING others about LW’s supposed scamming ways regarding the sale of Stevie Ray Vaughan’s memorabilia. That’s how he dealt with what he see as lawbreaking. In doing this, I must point out, trashing someone’s character like this in print publicly, is certainly not something the law turns a blind eye to. Infact, the internet is getting its own house in order regarding the use of the web to post defamatory things about someone. You can’t post libellous insults and sit back chuckling at the victims discomfort. The fact that LW hasn’t sued I can only conclude, means it’s all true, because when people are wronged it always ends up in court. If you’re going to continue to defend LW I think you should drop the “ never been prosecuted” defence. I think the recent Hollywood cases have proven you can be the devil and yet still have a clean record. It indicates little.
Ps, on another subject, what on earth is the ‘Capel Green Incident’? If you wish to distance yourselves from the RFI why not call it the ‘Larry Warren Incident’ after all didn’t Georgina Bruni say LW was the only person to ‘see’ anything at Capel Green?