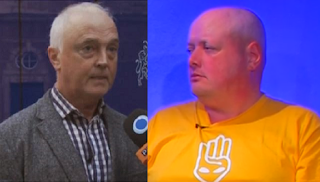 A few weeks ago I posted notice of my upcoming live dialogue with Dr Nick Kollerstrom at Wallsend, and Wear; see: https://hpanwo-voice.blogspot.co.uk/2017/10/nick-kollerstrom-and-ben-emlyn-jones-in.html. However the hosts at the venue have ordered the event cancelled. Somebody has informed them of what an evil deranged violent Nazi psychopath Nick Kollerstrom is, and so to prevent him from eating the audiences' livers they have decided to ban him. By extension I am therefore banned too (Twice in the same year! This is becoming a worrying new habit, see: http://hpanwo-voice.blogspot.co.uk/2017/04/the-larry-warren-controversy-part-11.html). The good news is that the event will still go ahead on the same date, Sunday the 26th of Noivember, and the same time, mid-afternoon, somewhere in the area of , but at a different venue. To prevent further disruption the location of the venue will be kept secret and only divulged to people when they book tickets. Please call Maureen on 07986 575 607 for details of how to obtain tickets. Pre-booking is essential and nobody will be admitted on the door. Apologies for the unusual arrangements, but it is the only way to prevent the so-called "anti-fascists" from succeeding in their campaign of censorship.
Posted by Ben Emlyn-Jones at 18:50

Just do it live in a public square or something for free. Oh no people might criticise your material if you did that. If you are going to achieve world fame you may as well get your Wogan moment out of the way and then sit back and watch the cash just roll in because I presume that is the only reason you do all this for, you're not telling me you actually care about people are you?

Are you two hunks father and son?

I bet you'll be checking where all the lodges are in the area this time, won't you? And I don't mean Travelodges.

Awww mate wish it was gonna be down the south and I wud defo go to tel the truth mate. As you no the old scooby doos will never allow you too qeuestion the holohoax. Nick is a brave chap and he is totally right. I saw him speek on the London forum. I also love David Irvings. A brillient man to be fare. Oh well I look forword to hereing how it all goes mate. Cheers. Baz

Hi Ben, I am really disappointed you have had to cancel your speak with Nick in Wallsend as I was planning to go. I want to go even more now to show the man we won't put up with this crap. I live in Berwick upon Tweed and Wallsend was ideal. Any chance you could tell me within what conurbation the new talk will beheld, like Gateshead, South Shields, etc? I understand about the not giving away the venue that's fair enough. Just if you do further south than Gateshead I probably won'tbe able to afford to go, like if you go to 'boro. Thank you.

PS I met you once at a Glasgow conference. 2015 I think it was, we had a nice brief chat I remember.

Hi everybody. Thanks for your supportive comments. Nick and I will assert our right to free speech come what may. If people think we're wrong about anything (and Nick and I disagree between ourselves on a lot) then they can by all means say so, but they have no right to prevent us expressing our viewpoints.

Hi Ben,
Just been reading up on things and I am really sorry that you have split up with your girlfriend of so many years. You must be hurting you poor soul, you really didn't deserve that by the sounds of it. I just wish I could make it up to you somehow. I was in a long term relationship for 5 years (I'm 28) and it was crushing to lose what I thought was my soul mate. I don't suppose I'll ever find another man like that but sadly good riddance in the end. We used to have so much fun. That was nearly a year ago and I haven't been with anyone since as I didn't want to have a rebound relationship. But I'm starting to think the time is right to look for another man to ignite my soul once more.
Look forward to seeing you soon.
Kate x

Could you tell us the date, you say its the say as the cancelled one, but when was that.

Thanks, Kate. Much appreciated x

Anon, the 26th, next Sunday. I've edited the post.