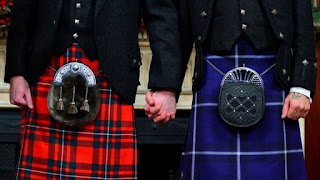 The First Minister of Scotland, Nicola Sturgeon, has issued an official state apology to all homosexuals convicted under the laws prohibiting the sexual activity of same-sex couples. These laws that were not repealed until 1981, fourteen years later than their equivalents in and . The new legislation, called the Historical Sexual Offences- Pardons and Disregards () Bill, also acts as a pardon. It will automatically remove all former offenders from the sex offenders register and wipe clean their criminal records, regardless of how long ago it was before the repeal that their prosecution took place. It was a very moving moment. As Ms Sturgeon read out the speech there were two old men in the public gallery with tears in their eyes, obviously two people who suffered as a result of this injustice. They must have been waiting a long time for this announcement, see: http://www.bbc.co.uk/news/uk-scotland-41891397. The offshoot of this new legislation is that it sets a legal precedent that can apply to other people who were found guilty of breaking laws that were then subsequently repealed by decree of statute. Regular readers will guess that I am talking, of course, about Helen Duncan. Of course English law is what counts in this case, but what has been done in will help. Thanks to the "Turing Laws", see: http://hpanwo-voice.blogspot.co.uk/2016/10/helen-duncan-pardon-breakthrough.html, Helen is already in line for receiving a pardon and apology for her 1944 conviction under the Witchcraft Act of 1735; this new development in will speed that along and also directly affect her previous Scottish criminal record under the Vagrancy Act. Will we soon see the complete pardoning of Helen Duncan? I think so! See here for more details about the campaign: http://www.helenduncan.org.uk/.
See here for background: http://hpanwo-radio.blogspot.co.uk/2015/06/programme-144-podcast-margaret-hahn.html.
And: http://hpanwo-tv.blogspot.co.uk/2015/03/helen-duncan-wartime-psychic-jailed.html.
And: http://hpanwo-tv.blogspot.co.uk/2016/11/ben-emlyn-jones-live-as-assap-seriously.html.
And: http://hpanwo-tv.blogspot.co.uk/2016/07/skeptics-who-are-they-why-are-they.html.
Posted by Ben Emlyn-Jones at 19:54