Margaret Hahn on the BBC 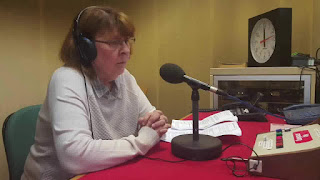 My friend the legal campaigner Margaret Hahn has been interviewed on the BBC. She talks about her grandmother Helen Duncan on BBC Radio 5 Live. Margaret is currently touring the and working on the book she's writing. The interviewer appeared fairly uninterested in the huge implications of the case and admits at the beginning she only has a rudimentary knowledge of spiritualism; something she "read up on" for the interview, along with everything else she had to learn for her many interviews that day, no doubt. She wrongly states that Helen was charged with fraud; the 1735 Witchcraft Act has nothing to do with fraud. However she does allow Margaret and her fellow guest, her fellow campaigner Graham Hewitt, a fair hearing. See: https://www.youtube.com/watch?v=_P3DJY2meNM. The message has gone out. As I've said in a previous article, because of the "Turing Law" there are now hopeful legal grounds to have Helen Duncan officially pardoned, see: http://hpanwo-voice.blogspot.co.uk/2016/10/helen-duncan-pardon-breakthrough.html.
See here for Margaret's latest interview on HPANWO Radio: http://hpanwo-radio.blogspot.co.uk/2017/01/programme-221-podcast-margaret-hahn.html.
See here for more background: http://hpanwo-tv.blogspot.co.uk/2015/03/helen-duncan-wartime-psychic-jailed.html.
And: http://hpanwo-tv.blogspot.co.uk/2016/07/skeptics-who-are-they-why-are-they.html.
Posted by Ben Emlyn-Jones at 19:50