Corbyn Falls Asleep on the Train 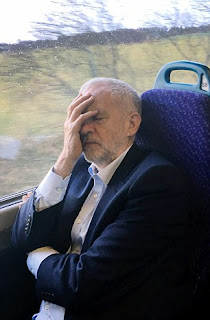 That paragon of national journalistic virtue, The Daily Mail, has brought you the scoop beyond all scoops. It has caught the Leader of the Opposition in the act!... Yes!... I wish it were possible to reveal this to the British people more gently. He has actually nodded off during a train journey. Call the police!... Jeremy Corbyn was actually at the end of a long hard day. He'd been to Copeland to watch his party lose a seat in a by-election, one they had previously held safely since 1934. They lost it to the government too which is almost unheard of in a by-election. He did what railway passengers do all the time. The warmth and motion of the train cabin combined with exhaustion sends them off to sleep. I'm sure Tony Blair used to do the same, except he did it on the back of his chauffeur-driven limousine. The British tabloid press seem to have developed an unhealthy obsession with the natural bodily functions of Jeremy Corbyn. Two years ago they were measuring the angle of his head as he bowed during the Remembrance Day service. The Labour Party are in a very precarious position at the moment. They have always had a massive problem with infighting since the Thatcher era when the leadership initiated a shift to the centre in which old left-wingers like Tony Benn, and Corbyn himself, were relegated from the vanguard to the margins. Corbyn's election as leader in 2015 is something of a backlash against that. Very little has changed since the days of "Foot and Benn disease". There are still catastrophic splits in the party and this is what has caused its failure at Copeland and its low performance in recent polls. Corbyn has been blamed personally for Copeland by people both inside and outside the party and that is not fair. Let's not forget that on the same day there was also a by-election for Stoke-on-Trent Central which Labour won. Source: http://www.dailymail.co.uk/news/article-4265578/Jeremy-Corbyn-caught-nodding-train-twice.html.

Despite being called "unelectable", Jeremy Corbyn has won a leadership election and the vote of confidence after last year's attempt to unseat him. A lot of his proposals are ones most people support, like proper care in the NHS and public investment in the railways that make him so sleepy. I can't help admiring Corbyn. I disagree with a lot of what he stands for, but I can't stop myself warming to any statesman who is in politics out of a sense of principle. When you consider how many greedy psychopathic blackguards populate Parliament, anybody with a brain in his head, a heart in his chest and a pair of balls in his pants stands out like a jewel in a dung heap. The problem is Corbyn is an old left leader, but the middle management consists primarily of the lowest breed of new left crypto-Marxist scum. Diane Abbott for example, is somebody I find utterly repulsive. There is a mixed old and new left membership pool beneath them. Some of them reached that point where they feel forced into deciding between pragmatism and idealism. In this video, Owen Jones very evasively and apologetically calls for people not to support Corbyn because it will mean Labour won't win the next general election, see: https://www.youtube.com/watch?v=lGhOTihjHlk. David Icke talked about this same situation when he was involved with the Green Party in the 1980's. During a period of high popularity the Greens divided into two factions known as the "Fundies" (fundamentalists) and the "Realoes" (Realists). The Fundies insisted on the party sticking to its original constitution where the Realoes wanted to renege on a few of its principles because it might get them more votes. This contradictory dilemma goes: "I have ideals, but there's no point having them unless I'm in power to enact them, so I'll compromise on a few of them to get into power." The danger with this line of thought is that it's a slippery slope and at the bottom sits Tony Blair. Peter Hitchens warned the Conservative Party against doing the same thing. "They'd behead the Queen in on live TV if it got them into office." he said. This kind of corruption can happen almost without us knowing. If we think we really can juggle principles with political expediency we end up losing all of them. I think the political structures of conformist society are deliberately designed to lure people in and disarm them like this. If you have principles then stick to them. Have confidence in persuading the people that yours is the right way. I posted this as a comment under Owen Jones' video: "What are you asking for, Owen? A decent Labour politician who will NOT be 'unelectable' in the eyes of the media? We used to have one of those. We said: 'Just let Labour get power by any means necessary, then the man who did it will fulfil every whim of the sentiment we expressed during our years in opposition.' We believed him. He was called Tony Blair. Why don't you just take a chance on somebody who breaches the conventional political norms and stick by him. You have radicalism and revolutionaryism. Why are you abandoning him because the media say some nasty things about him. Are you seriously waiting for a decent politician the mainstream media will LIKE!?"﻿ Jeremy Corbyn is a part of what the mainstream media has christened "populism". In this sense he is very like the Vote Leave campaign and Trump, although he'd hate to think of himself that way. I personally see this as a very encouraging symptom, for reasons I've explained before, and therefore I hope Corbyn will keep his place as Labour leader.
See here for background: http://hpanwo-voice.blogspot.co.uk/2016/09/jeremy-corbyns-seat-to-be-abolished.html.
And: http://hpanwo-voice.blogspot.co.uk/2015/09/the-corbinator-wins.html.
And: http://hpanwo-voice.blogspot.co.uk/2016/11/conspiracy-theorists-finally-proved.html.
And: http://hpanwo-voice.blogspot.co.uk/2013/10/russell-brand-walks-away.html.
Posted by Ben Emlyn-Jones at 17:51