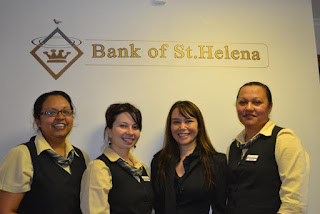 Despite what you might read in the rather cynical media coverage, progress continues with . In fact a new company has been established specifically to service , Atlantic Star Airlines. It currently only operates a single aircraft, but this will be sure to expand when its service proposal is processed, see: http://www.atlanticstarairlines.com/single-post/2017/02/06/Air-Service-Proposal-Submitted-to-St-Helena-Government. They believe that they can overcome the wind shear problem and have carried out a number of calibration flights. April the 18th marks the first anniversary of the first landing by a large jet airliner on and full commercial operations will soon be running. For a while I've been reporting on how opening St out to the world will inevitably change the island's unique human culture, regardless of the benefits it brings. The signs are already manifesting, such as 's police being trained to use tasers, see: http://hpanwo-voice.blogspot.co.uk/2016/09/tasers-on-st-helena.html. In December it was casually announced in a notice that a system of debit cards will be introduced by the Bank of St Helena. At the end of a general annual status statement it said: "The remainder of 2016/17 and into 2017/18 is set to be an exciting time for the Bank with the exploration and development of new products and services namely local debit cards and international pre-paid cards. With an ever increasing cashless society around the world, the Bank has taken steps to follow this trend. Local debit cards will reduce the requirement for cash and considerably reduce the number of transfers manually input by tellers. This in turn will reduce operational risk of errors occurring and ultimately reduce employee costs in the longer term." Source, page 16: http://www.sams.sh/sentinel/Sentinel_161222.pdf. The Bank of St Helena turns over about 33 million pounds a year and also operates on ( has no need of a branch, see: http://hpanwo-voice.blogspot.co.uk/2016/10/tristan-da-cunha-st-helena-plus.html). Obviously the use of bank cards is now almost globally universal and there's no justification to actively prevent their use on ; not least because of the benefits they can bring. However, as I have explained many times, there are serious hazards inherent in electronic money relating to privacy and financial independence, for example see: http://hpanwo.blogspot.co.uk/2008/11/coins-are-dropped.html. There are no current plans to turn into a cashless society, but such a move would never be done in a single stage anyway. There are indeed plans to turn other nations cashless, such as ; and, even more worryingly, , see: http://cashlessindia.gov.in/. might just be a single country, but it has a huge population; in fact one out of every six people on earth lives in . If goes cashless smaller countries will inevitably be sucked in. What chance will poor little have? Therefore I ask the Saints to think about these issues before agreeing to these proposals. Do your own research and enter into any now innovations with caution.
See here for a HPANWO Radio special about : http://hpanwo-radio.blogspot.co.uk/2016/11/programme-212-podcast-st-helena-airport.html.
See here for more background: http://hpanwo-tv.blogspot.co.uk/2016/06/st-helena-airport-opens.html.
And: http://hpanwo-voice.blogspot.co.uk/2012/08/basics-card.html.
And: http://hpanwo-voice.blogspot.co.uk/2015/06/youve-been-mangod.html.
And: http://hpanwo-voice.blogspot.co.uk/2014/12/contactless-travel.html.
Posted by Ben Emlyn-Jones at 19:35