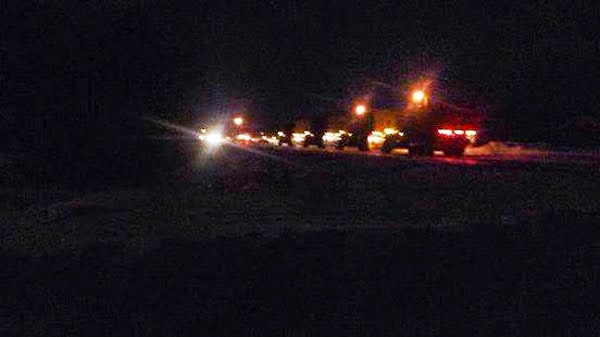 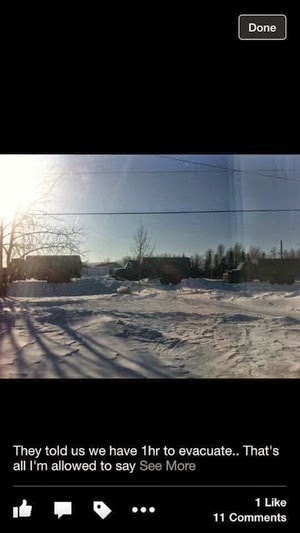 This post refers to a breaking news story that has just gone viral, but the event under discussion happened last Wednesday in . Reports state that a UFO has crash-landed onto the frozen surface of in ; this was accompanied by the noise of loud explosions. The region where this happened is sparsely populated; the only settlements in the area are those of the nearby Jackhead Indian reservation. After the object supposedly came to grief, it is suggested that a typical military crash-retrieval operation immediately followed which is still underway at the present time. A number of people have visited the area and taken photos, two of which are shown above. We see a convoy of military vehicles and a police roadblock. Some visitors have reported that they have been harassed by the security forces, forbidden from taking film and photographs and there have even been reports of arrests. There is a copy-protected image of a pyramidal object sitting in the snow on the frozen lake which is reputed to be "smuggled out", but this might not be real; it looks to me like a sculptured mound of snow. What's more witnesses report seeing a disc-shaped object in the sky earlier in the day. The mainstream media have said very little except to announce that there is no UFO crash and the soldiers operating in the area are simply taking part in an exercise called Arctic Bison, see: http://www.cbc.ca/m/touch/canada/manitoba/story/1.2963994. However people living nearby dispute this. They say that there were no troops around before the crash, also the Canadian army is not permitted to exercise on Indian land anyway so they could only be there on serious business. The chief of the local Kinonjeoshtegon tribe has contacted Third Phase of the Moon to report that he is under house arrest. Also a lot of the phone lines in the area are down. The area where this has happened is quite inaccessible and it has a limited communications network; at this time of year the weather is usually extremely cold and transport is difficult. The few roads accessing the place are closed. There is a big city called , but its name is misleading because it's almost forty miles away from the southern shore of the lake and several hundred miles from the Jackhead reservation. Lake Winnipeg is huge at over 250 miles across and the army have been using snowmobiles to traverse the frozen surface to where this alleged object came down. I'm interested to see how this story develops. So far Third Phase are the primary source of information and their track record is not always reliable.
Here is their series of video reports:
Wednesday: https://www.youtube.com/watch?v=I92ZC2cGc8s.
Thursday: https://www.youtube.com/watch?v=y_SJbGIO3VE.
Friday: https://www.youtube.com/watch?v=1MjLAPPFOVM.
Sunday: https://www.youtube.com/watch?v=ECtLVomjwcM.
Tuesday: https://www.youtube.com/watch?v=w9P25fXXf6M.
Wednesday: https://www.youtube.com/watch?v=dI0nRfSNkFg.
However as more and more people are travelling to the area and the pool of witnesses grows this case should hopefully be confirmed or denied before long. If this is a new Canadian Roswell then could this be one in which the cover-up fails at the outset? If so then it would be perfectly timed because of Steve Bassett's Congressional Hearing Initiative and the Roswell Slides, see: http://hpanwo-tv.blogspot.co.uk/2015/02/ufo-disclosure-2015-john-podesta-and.html.
Posted by Ben Emlyn-Jones at 12:25

Canada has an obligation to tell the world was has actually happened her....WE CAN HANDLE THE TRUTH.....the whole world is watching you Canada, stand up and be counted as the proper citizen of the world that I believe you are...it's time to stop the lies, don't let other countries control you and the worlds destiny,
Rob Newitt,
Director,
TUFON-Terra UFO Network,
Hobart,Tasmania,
Australia.
Our countries have fought together,
we are brothers in arms,
please, don't lie to us......

You heard it, Canada! Grow some balls and be the Disclosure nation! Wouldn't that piss off your overrated neighbour to the south.

Man up Canada!
Grow some huge balls and become a *real* man just like Ben Emlyn-Jones.