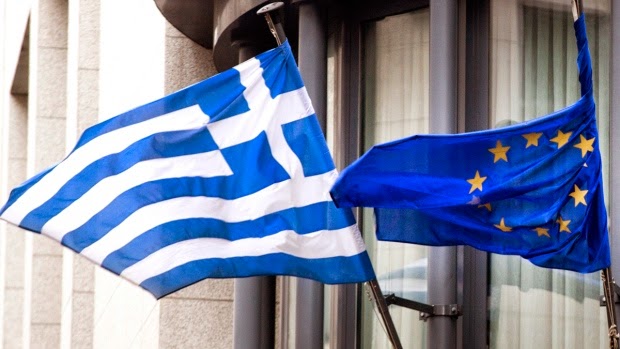 A few weeks ago I reported on the plight on Tom Crawford, a homeowner who had been threatened with repossession by bailiffs; over five hundred people blockaded his house making it impossible for the debt collectors to enter, see: http://hpanwo-voice.blogspot.co.uk/2015/01/je-suis-tom.html. What happened to Tom is happening all the time all over the world on different scales. Not just to individuals but entire communities and nations are often targeted by the weapon of unlawful fiat debt. is the country that has suffered the most in this way in recent years. Following the bail-out and International Monetary Fund loans that pillaged the world in the wake the 2008 economic crash was devastated, treated as the footstool of the Eurozone. It's always been a culture naturally prone to political chaos and it didn't take long for the state and financial infrastructure to virtually collapse. Public employees stopped getting paid, unemployment soared and schools closed; half of people under-twenty-five ended up out of work. This led to a radical swing in the political views of the populace and on the 26th of January they elected Alexis Tsipras as prime minister on a staunch anti-austerity manifesto. He's the leader of Syriza, a left-wing populist coalition of political parties of all spots and stripes, united on an economic eurosceptic platform. When I first read the headlines about Syriza's victory I was delighted; finally a brand new political movement detached from the middle-of-the-road liberal moderate europhile norm had taken power. This apparently "sent shockwaves through the EU!" I had images in my mind of a Tom Crawford writ large... I really should have known better.

I think most people outside who are less knowledgeable of her internal politics, including myself, expected an immediate "Grexit", the Greek exist from the Eurozone. Instead all Tsipras' government has done is arrange a renegotiation of the original Greek debt "obligations". One of Tsipras' ministers and an MEP, Dimitrios Papadimoulis, has stated very clearly that wishes to remain a "respectable member of the European Union and the eurozone" and that "there is absolutely no case for a 'Grexit'." Only a few days ago Tsipras went cap-in-hand to asking to borrow 240 billion Euroes; said "no way", see: http://www.bbc.co.uk/news/business-31532755. Greece also wanted to trade its own government bonds with the European Central Bank in return for raw cash, but the bank refused, probably because it has already seized so many of them! Every Eurocent the Greeks gain from these negotiations will be spent on repayments of the various ECB and IMF loans. They took a seat at the diplomacy table and yesterday it was announced that they'd been granted a new bailout deal, see: http://www.bbc.co.uk/news/world-europe-31561114. I'm sure many Greeks are wishing now that their country had "done an Iceland" and fixed their own economy by refusing the "offers" of the IMF and ECB, and putting the bankers in jail. However, it's not too late. now has an opportunity to willingly default on their Eurozone bailout repayments. They can tell their creditors to get stuffed because the loans of billions paid to nation states are equally fraudulent as those of thousands paid to individuals mortgage-borrowers like Tom Crawford. Of course this will mean an instant dismissal from the Eurozone and EU... well good! It will be an opportunity to reintroduce their old Drachma currency, dispensed directly from their treasury in greenback form. And if the IMF and ECB decide to send any bailiffs their way, Tsipras can stations his army at all the ports to "greet" them. You might think this is unrealistic; the consequences would be too terrible. The international community would denounce and impose sanctions or even a full trade embargo, try and starve it into submission. The best way to deal with playground bullies is to make friends with other targets and fight back with a united front. Fortune favours the bold! Tsipras could tell them once again to get on their bike and approach other nations to arrange independent bilateral economic agreements. One name obviously springs to mind and it will probably also spring to regular HPANWO-readers: . As I said recently, is currently resisting the globalist thugs very calmly and shrewdly. It has formed alliances with , and other outcasts from the dysfunctional New World Order family. I hope will see sense and join the growing club of happy exiles, see: http://hpanwo-voice.blogspot.co.uk/2015/02/you-really-dont-like-russia-do-you.html. In fact there are already signs that this has occurred to them. President Putin's envoy was one of the first to visit Tsipras when he was elected last month. I've said in the above link how Vladimir Putin is probably the closest any world leader gets to being somebody I can respect. He is certainly a breath of fresh air in comparison to his loathsome peers. The extremes of cruelty, dishonesty, weakness and stupidity of the average politician these days absolutely disgusts me. It would be nice if somebody more like Putin could take power in . Over two thousand years ago was home to the great Classical civilization that shaped the history of . In , where the modern government of sits, the Parthenon, the great stone monument of that civilization still dominates the city's skyline. If Zeus, Aphrodite and the other ancient gods of exist then they are probably right now shaking their heads and folding their arms. Wouldn't it be a shame if the Greek people missed a chance to once more make their gods proud?
Posted by Ben Emlyn-Jones at 18:46

that wicked tribe of Dan and their atrocity and perversion of Levi with be stubble under our feet very soon...remember the law of Moses...let my people go? The BAAL priests of the City of London CORPS is already DEAD...Barr Bar Ba...

Yes, Stewart, Greece could set others a good example if they do the right thing themselves.

Why the need to identify Greece with masculinity?
Please don't associate political power with male sexual potency – it excludes half the population in the process.

Here's a sickening guide as to what happens in Putin's glorious Russia for those brave enough to stand up to his corruption around Sochi:

All dished out by typical macho thugs. Gays were banned by the government from demonstrating at the same event.

Compare the title to the article with:

"Despite the efforts of the feminist revolution, our collective subconscious still considers women weak and inferior. Deep down, we think that women “upgrade” themselves with typically masculine traits, but men “degrade” themselves with feminine traits. Being feminine is often an insult (“what a girl!”, “pussy!”) whereas being masculine is considered a good thing (“man up!”, “grow some balls!”)."

Sums it up pretty well. Quote taken from, What is Sexism: