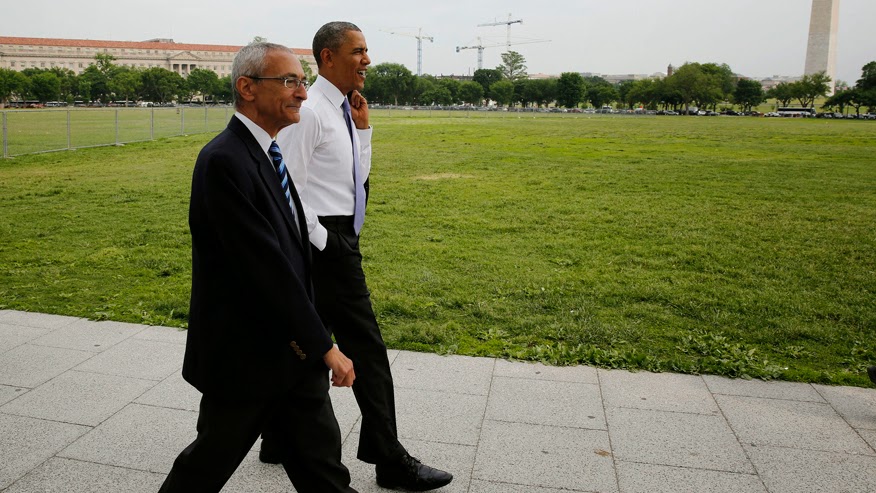 During his outstanding lecture at the Fourth Annual Leeds Exopolitics Expo Stephen Bassett spoke highly of John Podesta, an American statesman who has been an adviser to Presidents Clinton and Obama. He's also a prominent liberal lobbyist and is president of the liberal think tank the Centre for American Progress. Steve said we should Google Podesta's name regularly, see: https://www.youtube.com/watch?v=39hLIXBhSNk. If you do so today you'll come across some remarkable news stories. Podesta has quit his White House job to work full time for Hillary Clinton's 2016 presidential campaign. When he announced his resignation he made an almost unbelievable Tweet: "1. Finally, my biggest failure of 2014: Once again not securing the disclosure of the UFO files." This Tweet included the now famous hashtags #disclosure and #thetruthisstilloutthere. So a mainstream politician in the Executive branch of the US Government's biggest regret on the year is not failing to meet targets on employment and economic growth, not the increase of immigration levels, not the broken peace deals in Ukraine and Gaza... but the lack of UFO Disclosure from his own government!? This is the man who is about to help run the campaign for who will almost certainly... nay certainly... be the next President of the United States, see: http://www.independent.co.uk/news/world/americas/us-presidential-aide-john-podesta-says-biggest-regret-is-not-securing-release-of-government-records-about-ufos-10049486.html. UFO's are a strange subject. As Robbie Graham has pointed out, they are paradoxically so normal and so abnormal at the same time. Everybody knows what they are and a good proportion of the population has seen them up close. movies with a UFO theme are among the most popular of all time. Yet simultaneously they project this extreme sense of the lunatic, the outlandish and the arcane, see: https://www.youtube.com/watch?v=cyGFN-C40nQ.

Presumably Hillary doesn't mind the man behind getting her that seat in the Oval Office going onto social media and talking to the world about flying saucers and little green men; at least she hasn't made any response herself to John Podesta's twittering. Podesta must also have felt secure in the knowledge that there will no professional reprisals over what he said. This is in a world of censorship and self-censorship in which a wayward online posting can lose you a job or an election (unless you're Diane Abbott of course). Everybody on Capitol Hill seems to have accepted Podesta, alien warts and all. Even when he wrote the foreword to Leslie Kean's groundbreaking book UFOs- Generals, Pilots, and Government Officials Go on the Record it didn't damage him career-wise. In 2002 he spoke at the National Press Club during an event organized by the Coalition for the Freedom of Information in which he stated: "I think it's time to open the books on questions that have remained in the dark about government investigations of UFO's. It's time to find out what the truth really is that's out there. We ought to do it because it's right; we ought to do because the American people quite frankly can handle the truth (paraphrasing Jack Nicholson in the film A Few Good Men). And we ought to do it because it's the law." John Podesta is fairly typical of the lone voice crying in the wilderness. He's similar in that respect to Admiral Peter Lord Hill-Norton, a British military official who fought the Kriegsmarine during World War II, was once Chief of the Defence Staff, chairman of the NATO military committee and who worked on the Polaris submarine-launched ballistic missile strategic nuclear deterrent programme. As with Podesta, this is not the average career path for a New Age conspiratorial fantasist. Lord Hill-Norton bravely spoke out about UFO's in official Parliamentary debates amid much laughter from his peers and the media. No doubt Podesta gets his fair share of jibes too. I've noted before that the left hand side of the political spectrum is far less tolerant of UFO/paranormal/conspiracy theory than the right. Indeed in some countries it can lead to default accusations of fascism, see: http://hpanwo-voice.blogspot.co.uk/2014/02/rob-brotherton-and-psychology-of.html. It takes a lot of courage to maintain a UFO stance under these conditions and I can only hope Podesta's endeavour is not in vain; perhaps others in positions of responsibility will be inspired to join him. We're going through an exciting time in UFOlogy, see background links for more information. In my view, if willing Disclosure could ever happen at all, then it's likely to happen now.

The sad fact though is that John Podesta is probably the last man on Earth who would ever be told anything about what real secrets abound. He will have acquired almost all his information from the same sources that I have: books, the Internet and UFOlogical public meetings. His position in high office means nothing in the world of "need-to-know". This point is well illustrated by a conversation Dr Steven Greer of the Disclosure Project had with Lord Hill-Norton. Greer visited the Admiral at his Hampshire home shortly before his death and Hill-Norton said that he was frustrated over his failure to gain information on secret government research into UFO's. Despite the fact that he was 's most senior and longest served military officer nobody told him anything. Greer answered him with a question. What would Lord Hill-Norton do if he found out that the government had salvaged the wreckage of crashed flying saucers, had back-engineered their powerplants and propulsion systems and had kept this knowledge secret from the British public? The Admiral shouted: "I wouldn't stand for it for a bloody moment!" And Greer responded: "That, Sir, is the reason why they never told you anything." The keepers of UFO secrecy, or the breakaway civilization, as Richard Dolan calls it, have no national allegiances and they operate independently of overt authority structures. A junior lieutenant might be put in command of a crash-retrieval unit and receive a higher security briefing than the President of the . It's unlikely that Barrack Obama knows any more than he needs to in order to do his job. Hillary might be further into the loop, judging by her and her husband's involvement with Lawrence Rockefeller; if indeed the Rockefeller initiative is the real deal, which it may not be. Does this mean Hillary Clinton will be the long awaited "Disclosure President"? I'm not sure. What happens now? It will all depend on the success of Steve Bassett's Congressional Hearing Initiative and the Roswell Slides revelation on the 5th of May, see background links. Is Podesta aware of what's going on? Almost certainly on the level we are, but he's unlikely to have been briefed into anything behind the scenes. It could be that his Tweet about UFO's was his tacit hint to the secrecy keepers that he is now placing his bets. If Disclosure does happen before the end of the year then he may well become renowned as a prophet for the post-Disclosure world; does he know this? If not then he'll just be forgotten and a new fancy will emerge in the media to eclipse it. Time will tell, but Steve has just been on Coast to Coast AM talking about Podesta's bombshell, see: http://www.coasttocoastam.com/guest/bassett-stephen/5911.
See here for background: http://hpanwo-tv.blogspot.co.uk/2015/02/ufo-disclosure-2015-roswell-slides-and.html.
And: http://hpanwo-tv.blogspot.co.uk/2014/12/ufo-disclosure-2015-happy-new-year-last.html.
And: http://hpanwo-radio.blogspot.co.uk/2014/11/programme-113-podcast-stephen-bassett.html.
Posted by Ben Emlyn-Jones at 18:52