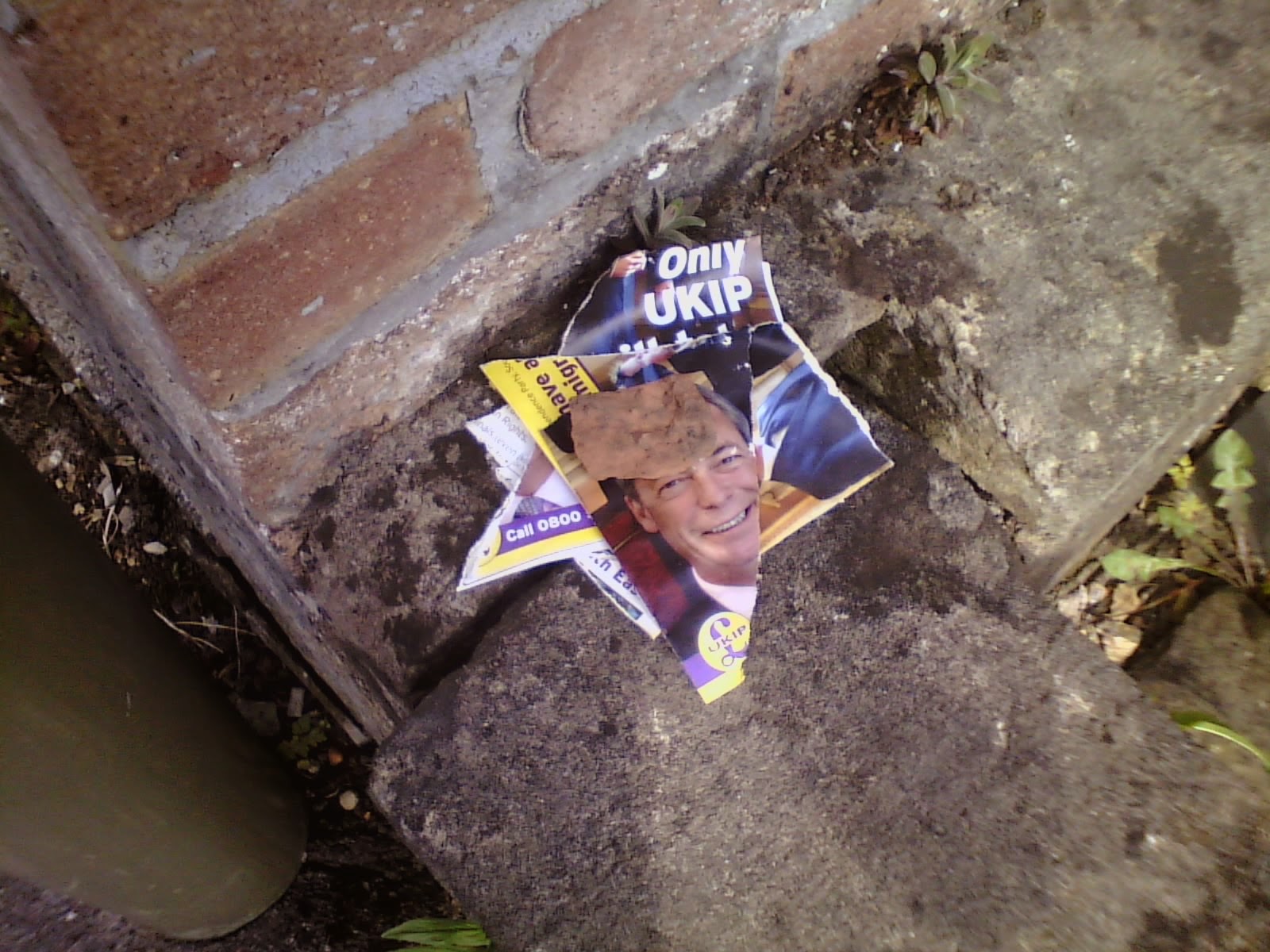 The United Kingdom Independence Party is enjoying unprecedented success in the current campaigning season in the run up to the European Parliamentary Elections on the 22nd of May. Opinion polls give UKIP between 27 and 38% as a public approval rating. They're definitely part of the top league of politics and Nigel Farage famously debated Nick Clegg a few weeks ago, see: https://www.youtube.com/watch?v=i6hy8KyedJA. A few months ago I wrote an article about UKIP, see: http://hpanwo-voice.blogspot.co.uk/2013/09/is-ukip-on-our-side.html; the answer to the question in the title is definitely "No!" However I know a few people who are going to tactically vote for them because they oppose the European Union; I oppose it too, should I therefore vote for them too?

I was walking along today and I saw a torn up UKIP election flier placed on a gatepost and weighed down with a stone, see photo above. The residents in the house had clearly had the flier put through their door and had decided to make a very public statement that any future UKIP canvassers would not be relying on their vote. I found this scene very near , a very Bohemian district of Oxford which is home to many people with left wing sympathies. For many of these folk UKIP represents the continuing rise of the racist far right. This is unfair in most cases, and as I explained in the linked article above, Godfrey Bloom has been badly misrepresented; the man's a buffoon but not a bigot. However there are still emerging scandals involving UKIP members breaking out daily. The latest that has come to my attention is by far the most serious; it involves a Geoffrey Clark, a UKIP member who stood for a Kent County Council seat two years ago. He has stated on his personal website that expectant mothers whose babies are diagnosed with birth defects like Down's Syndrome or Spina Bifida should be legally compelled to terminate their pregnancies. He says that this is because these conditions will render the child a burden on their family and the state. This idea comes under the heading of eugenics, the notion that the human species should be genetically modified to improve it; this includes eliminating congenital defects and hereditary diseases. I find this concept as distasteful as did the people who commented on the source article. The first problem is that physical "perfection", whatever that means, is not the ultimate factor is the value of a human being. Secondly, and this is a question I have asked many many times: why is it that everybody is obsessed with how much the unemployed, immigrants, the elderly and disabled etc, are costing the taxpayer, but then shrug their shoulders nonchalantly at the countless billions paid out to the banks in 2008; which was a far greater sum? is not the first to cause a public outrage over this kind of issue. A few years ago the healthcare ethics adviser Baroness Warnock stated that the elderly had "a duty to die" for the same reasons as 's. UKIP's response to Geoffrey Clark's "personal manifesto" was very soapy indeed: "The comments in Geoff Clark’s personal manifesto regarding abortion do not represent party policy. As in any party, our members have a range of views and opinions which may not always accord with party policy. Geoff makes clear that this is a personal manifesto, not a party document. Geoff is a hard-working local activist who would make an excellent councillor." In the end, lost the election.

So, I would bear this information in mind before voting for UKIP, but at the same time I don't intend to put the party on a sole pedestal of evil over this matter. I know enough about eugenics to understand that Geoffrey Clark and Baroness Warnock are definitely not alone in their proposals, they merely lack tact. The idea of eugenics, that natural humanity, in quality or quantity, is not good enough and it needs to be artificially changed, is definitely not confined to Kentish election candidates. It dates back several centuries and is a powerful force within the secret power elites today. See here for background: http://hpanwo-voice.blogspot.co.uk/2013/09/bases-project-live-in-london.html and: http://hpanwo-voice.blogspot.co.uk/2013/07/earths-population-reaches-7-billion.html.
Source: http://www.gravesendreporter.co.uk/news/exclusive_compulsory_abortion_for_down_s_syndrome_foetuses_says_ukip_kent_candidate_1_1745952. (Thanks to Teresa Lewis for finding this)
Posted by Ben Emlyn-Jones at 18:27