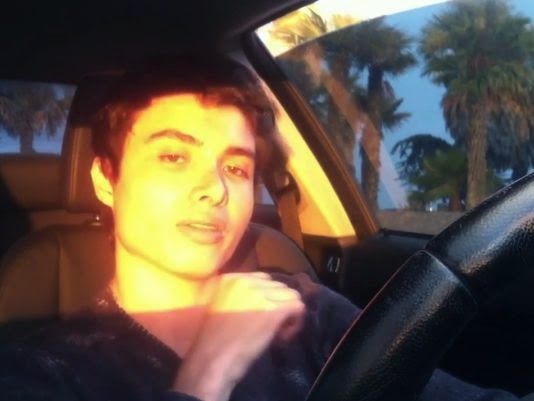 A few days before the time of writing, on May the 23rd, there was a killing spree in Isla Vista, California USA in which three men in an apartment were stabbed to death and soon afterwards a number of people were shot dead at a nearby students' accommodation block at the University of California Santa Barbara; two people were killed and three wounded. Then a student was shot dead outside a shop on a nearby street and several other people were hit along the road by shots allegedly fired from a passing car. The police responded and chased the car. There was an exchange of gunfire between them and the gunman in the car. This ended, we are told, when the gunman took his own life by shooting himself. See: http://www.telegraph.co.uk/news/worldnews/northamerica/usa/10854953/Idyllic-university-town-shattered-by-gun-massacre.html. The perpetrator was quickly named as Elliot Rodger a twenty-two year old who attended the university where he had carried out some of his attacks. He was the son of Peter Rodger who was a well-known film-maker and had recently directed a unit in the movie The Hunger Games. A few hours before the spree he recorded this YouTube video: https://www.youtube.com/watch?v=MQUW3Km01BM&bpctr=1401377669. In this chilling vlog he announces his plans to "have revenge" against humanity. He starts by explaining his sexual frustration due to the fact he can't attract girls. He resents the girls at his college for rejecting him and says he wants to kill them in retribution. Then he says that after he's killed all the women at the college accommodation blocks he'll head out onto the streets and kill as many random strangers as he can; this is of course what happened. He says he hates mankind and wants to reduce people to "mountains of skulls and rivers of blood". He states narcissistically: "I'll be a God, exacting my retribution!"

The question has inevitably gone out in the conspiratorial community: Is everything as it seems? I personally think it's too soon to know for sure, but this does not mean we shouldn't ask. Nobody should feel guilty for wondering, nor criticize others for doing so. We have been faced with a whole series of very blatantly suspicious events in recent months, for example see: http://hpanwo-voice.blogspot.co.uk/2014/05/sandy-hook-memorial-defaced.html and: http://hpanwo-voice.blogspot.co.uk/2014/02/lee-rigby-patsies-get-life.html, so please do not tell me I should automatically believe that this latest atrocity happened exactly as the media has told us it did! The call has inevitably gone out for more gun control in the United States, including from the father of one of the people shot, as if the US Government didn't already enjoy supremacy of force! The first odd thing that strikes me about Rodger's death video is that the emotion in it seems very affected. Notice how he stops talking and sniggers every now and again; this appears to be very forced and bogus. The things he says also sound like he's reading out some dialogue from a cheap "revenge of the nerd" novel or B-movie. Lots of cliches, nothing original, nothing even particularly personal; it comes across as a sham. If this is another faked gun attack then why was it done? If the authorities already have a monopoly of force then why do they need to disarm the American people even more? I posed these same questions over ; I have no answers at the present time. I also don't dismiss the possibility that this is, for a change, a real event which is exactly as we've been told on the news. A disturbing side-effect of this crime has been how it has been exploited by feminism. The Twitter hashtag #YesAllWomen has been filled with Tweets by people claiming Roger's misogyny is connected with general abuse of and hostility towards women. Luckily a response: #NotAllMen has rightly challenged that notion. It is fairly predictable that feminists would do this kind of thing. Feminism concerns me enormously because of all the forms of cultural Marxist brainwashing in society; it is the most widespread and the most ruthless. It is completely divorced from rationality and devoid of any sense of fair play. See here for background: http://hpanwo-radio.blogspot.co.uk/2014/05/programme-86-podcast-dave-rave-part-3.html. So whether Elliot Rodger was an actor, a mind-controlled assassin or a mentally ill student with a chip on his shoulder, there's no doubt that what he did is being used as psychological warfare of one kind or another.
Posted by Ben Emlyn-Jones at 16:53

The young, angry 'feminists' remind me increasingly of the EDL in their opportunism and their 'us and them' mentality. I have equal disdain for them both.

I have no more reason to feel responsible, or guilt-ridden, for the actions of an individual man than any '3rd wave' feminist does. I am not 'men'. Elliot Rodger was not 'men'. But then I wouldn't expect a group so keen to define people by their gender to notice.

Exactly, Marcel. Feminism is basically a psychological warfare attack on us all, men and women. I've lost friends for saying this! I don't care!

Elliot Rodger's statements in his video and also his "manifesto" are so delusional and out of touch with reality that I suspect either he was demonically possessed or under some type of mind control. I have heard that a person can be given scopolamine without their knowing it, and then that person will do what they are told to do. His behavior was not typical for someone who has Asperger's Syndrome.
In order for the New World Order, or global government, to be brought in, the public must be disarmed so they cannot fight back. Each time there is a shooting incident, there are calls for gun control. But history has shown that tyrannical governments have been responsible for killing millions of their own people (Stalin, Mao Tse Tung, Pol Pot in Cambodia)