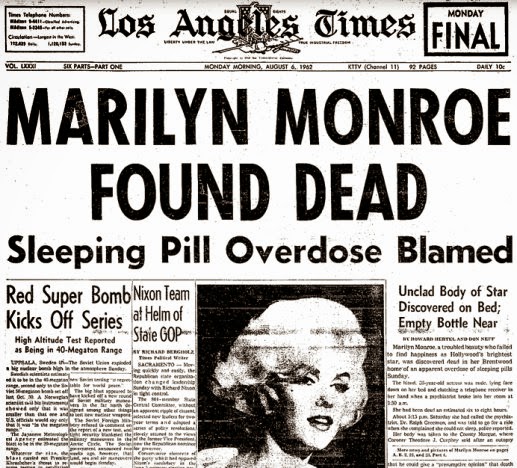 The Daily Mail have reviewed a new book which they appear to consider so groundbreaking that they’ve published the review as a news story. Jay Margolis and Richard Buskin’s new book The Murder of Marilyn Monroe- Case Closed claims to be an exposé of the truth behind the death of the superstar actress fifty-two years ago; as the title reveals, it was murder. On the 5th of August 1962 the thirty-six year old celebrity’s body was found by her housekeeper Eunice Murray and her psychologist Dr Ralph Greenson lying naked on her bed at her home. The supposed cause of death was an overdose of barbiturates and the verdict was “probable suicide”. However the details of the case have always sounded unsatisfactory to me. Her pathology reports indicate that no traces of drugs were found in her stomach. Her doctor and the investigating police officers asked that a second more detailed autopsy be done to verify how the drugs entered her body, but the coroner refused permission. The only evidence of suicide therefore was that the bottle of her prescription pills was empty and that she was suffering from severe depression. Who would want to kill Marilyn Monroe, one of the most popular and admired people in the world?

Actually there were a number of individuals who might want her dead for several reasons. The prime suspects are the US President at the time, John F Kennedy, and his brother and Attorney General Robert Kennedy. Marilyn had been having on-off affairs with both the brothers over several years and was said to be deeply in love with John, and she telephoned the White House on numerous occasions demanding that the President divorce the First Lady Jackie and marry her instead. She supposedly kept a diary containing secrets about the President and his family which she threatened to reveal at a press conference she would call the following morning, the morning after her death. The murder was said to be arranged by Bobby Kennedy and his brother-in-law the actor Peter Lawford. Aiding and abetting them was none other than Dr Greenson. He was also her lover, but he wasn’t afraid that Marilyn would blow the whistle on their relationship too. He did not want to kill her, but Bobby blackmailed him with tape recordings of Greenson and Marilyn together so he agreed to help. With the assistance of Bobbly Kennedy’s bodyguards, the murderers injected her with a sedative and gave her an enema containing a fatal dose of Nembutal barbiturates. Key new witnesses have come to light recently that are featured in the book, including the paramedic James Edwin Hall who attended the scene. His suspicion was raised when Dr Greenson approached him announcing that he was a doctor and offering his medical assistance. He joined Hall in his attempt to resuscitate Marilyn, but did it so incompetently that it looked as if he were trying to fail deliberately. Hall also noticed that she had not vomited, which was unusual for somebody who’d overdosed. He then saw Greenson give her an injection into her heart with a pericardial needle. This he did so violently that he broke one of her ribs; it was probably a poison, the coup-de-grace.
Such peculiar anomalies in the investigation of somebody’s death can also be found in the coroner’s inquests into the car crash which allegedly killed Princess Diana in 1998. This is a situation that could never arise if you or I were murdered, but those in elite positions of officialdom have the power to distort or quash a proper investigation in which they have killed somebody. As Attorney General, Bobby Kennedy would be the person most able to cover-up his own felony. Just over a year later the same would be done when his brother John was shot dead in Dallas by somebody… or somebodys… and Lee Harvey Oswald was blamed, see: http://hpanwo.blogspot.co.uk/2013/11/the-kennedy-assassination-50-years-on.html. We don’t know what happened to the diary Marilyn was supposedly keeping, nor the tapes of the conversations she’d had with the Kennedy brothers, if they ever existed at all. Obviously her governmental beaux didn’t want news of their flings with her to get out into the newspapers; it would have probably resulted in JFK being impeached (which ironically might have saved his life). It’s possible the Kennedys had also confided other secrets to her relating to far more underhand activities they’d been up to in relation to negotiations with the Soviet Union, domestic corruption, the Cuban Missile Crisis and even UFO’s, see the link above. It’s amazing how even the most secretive people will become irresponsibly candid when they’re lying in bed with another, see: http://hpanwo-voice.blogspot.co.uk/2013/06/profumo-50-years-on.html. The question is, will this new book result in any reopening into the tragic case of Marilyn Monroe? Is there going to be a new coroners’ inquest, criminal charges being pressed? Seeing as the amount written about the Kennedy Assassination has failed to initiate new proceedings then I find it unlikely. Trial by journalism has its essential place in history, but we might have to be content with what it has already achieved, another nail in the coffin of the authorities’ credibility and trustworthiness. All these nails add up and together, one day, the coffin will be ready for its ultimate burial.
Source: http://www.dailymail.co.uk/news/article-2630449/EXCLUSIVE-Bobby-Kennedy-ordered-Marilyn-Monroes-murder-lethal-injection-prevent-revealing-torrid-affairs-RFK-JFK-dirty-Kennedy-family-secrets-new-book-claims.html.
Posted by Ben Emlyn-Jones at 19:11