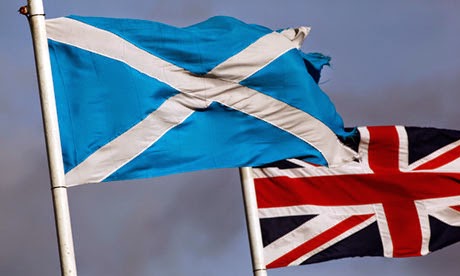 Scottish Independence is back in the news, see: http://www.bbc.co.uk/news/uk-scotland-scotland-politics-27595415. The UK Treasury and The Scottish government have engaged in an exchange of promotions, rhetoric and figures to try and justify the No and Yes campaigns respectively. The Treasury says Scots are £1400 a year better off being in the United Kingdom because public services are subsidized by Westminster; and also the price of restructuring the Scottish government would cost £1.5 to 2.7 billion. also has an older population on average than the rest of the . Alex Salmond's office has retorted that, on the contrary, people in would be £1000 a year better off if the Yesses have their way due to more efficient tax system, better economic policy and a boost in oil revenue. As you can see from this graph, was initially lagging behind in the opinions polls, but the gap has closed and the Yesses have overtaken the No's a couple of times, see: http://whatscotlandthinks.org/questions/should-scotland-be-an-independent-country-1#line. If it turns out that comes up trumps in the complex matter of splitting the National Debt, then the Yes line will probably soar up even further, perhaps to a winning position. There are now draft designs of the flag without its constituent St Andrews Saltire, see: http://www.theatlantic.com/international/archive/2014/03/will-this-be-the-uks-new-flag/284234/ (I'm glad to see that the Red Dragon of Wales gets a look in on some of the new designs). These economic theoretical statistics are all in "pounds", but, as I ask in the background articles, what currency will be using if... when... it becomes independent? Salmond has still not convinced of his plan for a " zone", see background links for more details. I can't help thinking that Salmond's consistent failure to reach a currency deal is suspicious. There's only so much failure you can suffer by accident. I predict that at some point somebody is going to suggest that joins to Eurozone. Mark my words!
Posted by Ben Emlyn-Jones at 18:27