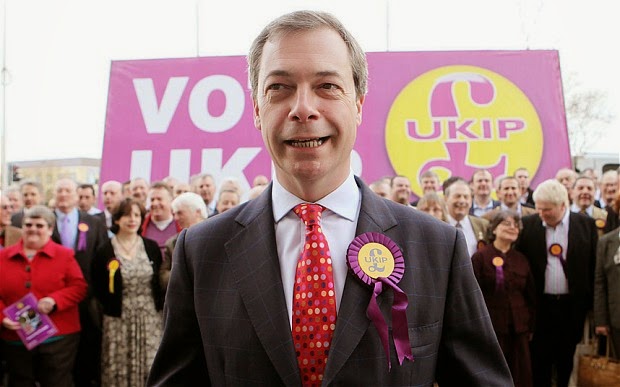 Nigel Farage, leader of the United Kingdom Independence Party has appeared on many news programmes today following his historic triumph in the 2014 European Elections. He says that the European Election result is the most remarkable in politics for over a hundred years, and he's right; see: http://www.bbc.co.uk/news/uk-politics-27567744.
I've written about UKIP before here: http://hpanwo-voice.blogspot.co.uk/2013/09/is-ukip-on-our-side.html.
And here: http://hpanwo-voice.blogspot.co.uk/2014/05/ukip-eugenics.html.

It's true that these results are very revolutionary and that pattern is reflected across the rest of the continent with formerly fringe political movements becoming as popular, or even overtaking, the traditional A-list parties. UKIP has gained eleven new MEP's and almost an eleven percent share of the vote. It has knocked Labour and the Tories into third place in some quarters, something which has not happened almost since those parties were formed. My own Euro constituency now has mostly UKIP MEP's, when it had formerly been Conservative or Labour since the European Parliament was formed. There are calls for Nick Clegg to resign as Liberal Democrat leader after his party was almost annihilated, losing all but one of its seats and finishing behind the Greens. At the same time the far right Front National in France has made enormous gains (Its founder and chairman Jean-Marie le Pen has obviously been listening to Erik Pianka, see: http://www.theguardian.com/world/2014/may/21/jean-marie-le-pen-ebola-population-explosion-europe-immigration) as has the leftist anti-EU front SYRIZA, topping the polls in Greece. The general trend has been radicalization, voters are moving away from the moderate spectral centre and into the polarities of both the left and right wing. It's obvious why; people are fed up with the European Union itself, with its economic sinkholes like the Eurozone Crisis, corruption like the Lisbon Treaty, the financial devastation by the European Central Bank of countries like Ireland, Greece and Spain, and its increasing detachment from the lives of its citizens. A lot of people are worried too about migration within the EU and immigration from outside it.

Some people I know in the conspiratorial community are rejoicing. They see the triumph of UKIP as a blow struck by the people against the New World Order. They see the European Union plot to be a stepping stone to one-world government, and I agree with them. But as far as they're concerned that plot now lies in tatters; I'm not so sure. As I explain in the background articles, I strongly suspect that UKIP is controlled opposition. The manipulators won't give up that easily! What's more the agenda is far more complicated than the people I spoke to think. Protest votes against immigration, which UKIP have tried to draw in, could be sign that the anti-immigration bait has done its job and the trap is almost ready to be sprung, see here for background: http://hpanwo-voice.blogspot.co.uk/2014/04/gypsies-on-benefits-and-proud.html. I oppose the EU totally and think should leave it, immediately and completely. I don't agree with a referendum either because technically joining the EU was treason and therefore illegal. You can't have a referendum on a criminal act; all you can do is tear up the 's membership papers and arrest the politicians responsible. However the EU agenda is not the only path to world government, there are many others, including extreme authoritarian reforms on the domestic front and we must be on our guard against that. I do not recommend, nor do I advise against, voting for any candidate in next year's General Election; but I do warn people to be wary of a proposed easy way out of a by-product of the agenda. Only full awareness of what this drive towards one-world government is, and how it works, can bring it to and end.
Posted by Ben Emlyn-Jones at 15:19

Very good article. It takes consideration and genuine awareness to see things in a constructive manner as this. Don't get fooled again people!

Cheers, Xylomet. I hope enough people can see through the UKIP honeymoon.

Good article. UKIP are a nasty strain of controlled opposition hence all the MSM coverage. Some further analysis here:
http://aanirfan.blogspot.co.uk/2014/05/nigel-farage.html

Thanks for the link, Anon. Indeed this is true, as I explain in the background articles. UKIP is part of the "Friends of Israel" movement that all the other parties are.

Hi Ben, an excellent article and I agree with you regarding the EU being created against the will of the people, but the very fact that a referendum has not been given to us,shows there is an agenda behind all this!

Thanks, Anon. And you're absolutely right. We may get a referendum at some point, but only when it can be rigged.