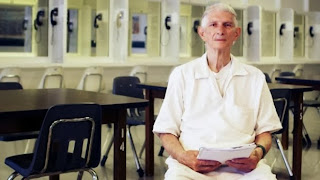 See here to watch Psychopath Night on Channel 4oD: http://www.channel4.com/programmes/psychopath-night/4od. (This link will only be live for a limited period of time. If a more permanent one becomes available, I'll edit this article and insert it.) (EDIT: It's now on YouTube: http://www.youtube.com/watch?v=pROu77TvZzA.)
I've discussed psychopaths many times before and if you're not familiar with what I've said, see here for important background: http://hpanwo-radio.blogspot.co.uk/2012/09/programme-15-podcast-psychopath-special.html.
And: http://hpanwo-tv.blogspot.co.uk/2012/09/centaur.html.

This one and a half hour TV show both introduces the concept of the psychopath to the newcomer and presents it from a completely fresh angle. It features interviews with diagnosed psychopaths, including a notorious serial killer, and psychological profiles of both real people and fictional characters. Some of the stars of stories about psychopaths are created after the author seeks advice from experts. This programme has an interactive feature which allows the viewer to take part in the "psychopath test" designed by psychology professor Kevin Dutton. See: http://www.channel4.com/programmes/psychopath-night. I scored 48% on what Prof. Dutton calls the "psychopathic spectrum". Dutton's theories are highly unorthodox because he suggests that psychopathic traits are a normal part of human existence and are not necessarily bad. He says that admirable features of psychopaths include focus, determination, self-discipline and "courage". As you can see from the links above I totally disagree. I don't believe that psychopaths are part of any kind of human psychological spectrum; in fact I question whether they even have a human psychology at all. In my view they are an entirely separate entity and nothing about them is comparable to human minds. The features Prof. Dutton admired actually only bear a superficial resemblance in psychopaths to the genuine human qualities of focus, determination, self-discipline and courage. At 36:20 in the programme he says to his experimental guinea pigs: "The same man who in one moment is an arsonist who burns your house down, in a parallel universe could be the one who braves the flames to save you". However a psychopath would never risk their life to save another person; this is why I put the word "courage" on Dutton's list in quotes. Psychopaths are the most monumental cowards in existence because they will bolt like a rabbit from the slightest danger to their own ego, position of power or advancement. Prof. Dutton cannot disprove that by making two of them do bungee jumps; in fact the two success-stories he would want on his side would never be genuinely on his side. Psychopaths only have one side, their own. Doing some pointless carpark daredevilry prank is one thing, but if it came to having to climb a rope down a cliff to save Prof. Dutton from a hungry crocodile it would be middle scorers, or maybe even the lower scorers, who would be most likely to do it. Steve and Ikra would just walk away thinking "well I'm alright, Jack". As I explain in the links above, psychopaths also have no sense of time, no awareness of past or future, and so they live in the eternal present. I became even more concerned about Prof. Dutton's "psychopathic spectrum" theory when a close friend of mine took his online test. She only scored 15%, and so is much less of a psychopath than I am! But when her score was revealed it included this summary text: "...but although you avoid hurting others, those residing at the higher end of the psychopathic spectrum might not be so considerate. So stay vigilant to avoid being hurt unnecessarily". There's a distinct whiff of social Darwinism in those words; that the non-psychopath is at fault for their "weakness", their lack of "positive psychopathic" traits. In fact even the programme's narrator states: "In this dog-eat-dog world psychopaths usually end up on top.", as if that's natural and just the way things happen to be. Again, I vehemently differ, see: http://hpanwo-voice.blogspot.co.uk/2012/11/thats-just-human-nature-man.html. It's true that psychopaths gravitate towards positions of authority, this is inherent in their own nature; but that's because of a failure on the part of the non-psychopathic world, not a fundamental principle of human society. Psychopath Night gives us a distorted view of this subject; it also trivializes and glamourizes it.

The programme is extremely sensationalist, having the serial killer interviewed read the ad-break outro: "You're watching Psychopath Night on Channel 4" with a vicious glint in his eye. Later on in the programme they interview a female lawyer with her face blanked. She is an open, self-diagnosed sociopath who has no conscience and is completely self-serving; she says that she finds the whole concept of empathy "weird". It's interesting that during her interview she begs the question of whether psychopaths should be considered a "minority". By that I don't mean a numerical minority; thankfully they are that indeed. I mean that they should be seen as a group with a special need for protection like black people, homosexuals etc. She says: "If there are ever prison camps for psychopaths and ox-cars come to ship us away to them, perhaps other people will feel some compassion for our compassionless hearts." This is actually an important point. The programme reckons about 1% of the population are psychopaths; the sources I've used say 6%; these figures vary. If ever there is full public awareness of psychopathy, what will happen? What do we do with these snakes in suits within our midst? If they really are that hostile and harmful we can't leave them free to wander the streets, can we? So then should we put them in concentration camps; perhaps even with gas chambers? If they have no feelings then they have no human soul and so killing them is not murder, is it? And think how many lives we could save with them all out of the way, couldn't we? I think not, and that this whole line of thought is a distasteful one. This is for two reasons. Firstly: diagnosis. What if we label somebody a psychopath when they're not? Jon Ronson has written a book which calls into question the entire psychological concept of the psychopath; here he is talking about it: https://www.youtube.com/watch?v=xYemnKEKx0c. I also explain in the background about "pseudo-psychopaths", non-psychopathic people who are manipulated into behaving in a psychopathic manner; this makes the experiment done to ex-special forces solider Andy McNab highly questionable. What's more Prof. Dutton incorrectly diagnoses James Bond. In several of the films Bond exhibits distinct non-psychopathic behaviour; for example in On Her Majesty's Secret Service, he falls in love with a girl called Tracy, the daughter of a gangster; and she is killed at the end of the film leaving Bond heartbroken. This tragedy, and its effect on Bond, is occasionally referred to in the other later films. But even if psychopaths are real, easy to diagnose without any chance of error, and really are soulless non-human beings, "organic portals" as I explain in the background links, we should not have camps for them. Perhaps because I'm only 48% a psychopath myself, the act of imprisonment and killing is so powerfully abhorrent on an intuitive level; the sociopath lawyer is right, it would still feel like genocide. But in purely pragmatic terms, I don't think psychopaths would be a danger in a world which publicly-accepted psychopathy. This is because a psychopath's power depends on stealth; they need people not to recognize them for what they truly are. They can only get what they want from people who fall for their shallow affected charm. In the background links I explain how "Centaur" wreaked the devastation that he did because my family did not know his true identity. He fooled them completely with his facade. Only a small number of people are psychopaths, sociopaths, organic portals or whatever else you want to call them. About 9% of men and 3% of women; I don't know why there is this gender discrepancy. Although these estimated statistics vacillate considerably, there's still no doubt they are vastly outnumbered. The majority of psychopaths are not physically violent. The only thing we really need to fear from them is their ability to influence the behaviour of others. And when those others can no longer be influenced then the psychopath is helpless.
Posted by Ben Emlyn-Jones at 08:18

Do you have to be a sociopath to get to the top, to get power. Billy Connolly said '“The Desire to be a Politician should bar you for life from ever becoming one' Funny, but there is truth in that statement.Where's the compassion in politics and why do so few politicians seem to really care about the less fortunate in our society. Do all police want to uphold law and order or is the power they like. Could you be a bailiff and evict families from their homes if you had an once of compassion in you? Are people who kill animals purely for fun (they call it sport) sociopaths. Could there be more sociopaths in our society than figures suggest, and are we just so used to people doing bad things we no longer notice. And the big question is are sociopaths born or made, or can it be both? The older I get the more it seems we are all victims of a system where kindness is seen as weakness and the people in charge are totally self serving do not care about anything except greed and power.