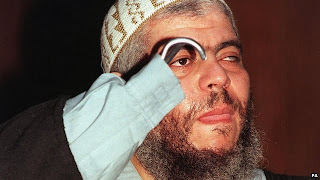 During Sunday's excellent radio Enemy Within radio programme, see: http://hpanwo-voice.blogspot.co.uk/2013/12/ben-emlyn-jones-on-enemy-within-radio-6.html, Tom the host brought up a subject I'd not heard of before; he has since sent me his source: http://www.telegraph.co.uk/news/uknews/terrorism-in-the-uk/10471056/French-spies-and-a-neo-Nazi-plot-to-kill-Abu-Hamza.html. This news story is one of the most groundbreaking I've come across because it's essentially a smoking gun for the idea that false flag terrorism is a reality. In this case the French intelligence services plotted to assassinate or kidnap the British radical Muslim Abu Hamza al Masri, but in a remarkable way; they intended to disguise the attack to make it look like native far right extremists had done it. In this sense it is very similar to "Operation Gladio" which took place in several continental European countries in the decades following World War II. This rare documentary from 1992 is one of the few occasions Gladio has ever been publicly discussed, see:  http://www.youtube.com/watch?v=GGHXjO8wHsA. In this case mainland European members of NATO trained guerrilla "stay behind" forces to act in the event of a Soviet invasion. However these forces did far more than that and were said to be behind a series of horrific terrorist incidents in post-war .

Abu Hamza is the first of a series of people who seem to be set up to fulfill a specific media role, almost like a character in a TV series who is played by different actors over a period of time. In this case it is: "Token Evil Muslim Cleric"; after him came Omar Bakri, after Bakri came Anjem Choudary and when Choudary's gone no doubt another actor will be brought forth to read the... dare I say it? Script. See here for more details: http://hpanwo.blogspot.co.uk/2010/01/muslim-clerics-are-they-shills.html. Abu Hamza is very sinister to behold, with only one eye and no hands. The tabloids quickly nicknamed him "Captain Hook" due to his crude metal prostheses. He is Egyptian by birth but became a naturalized Briton and was appointed an imam at a mosque; however his Wahhabist rhetoric was too extreme for that mosque so he was expelled. He symbolically and obtrusively stood in the street outside and preached to passers-by. This activity eventually led to him being arrested and extradited to the United States to face terrorism charges, or at least that's what we've been told happened to him. The story goes that the French authorities were concerned about the passivity of the British authorities towards him after he incited his congregation to bomb the 1998 World Cup in . The assassination conspiracy was a strange one though; the hit would be a false flag, made to look like it was the work of the British neo-Nazi terror gang Combat 18. It was a man with links to Combat 18, David Copeland, who had planted a series of bombs which killed three people and injured over a hundred. This story should make us sit up and ask some big questions: If this particular false flag attack has been exposed, how many others have not? If intelligence services are impersonating Combat 18 then were David Copeland's attacks also false flags? It's been done before on the continent with Operation Gladio. Tom from Enemy Within thinks that the authorities were not being "inactive" at all towards Abu Hamza, they didn't do anything about him because he was working for them. Why not when there's more evidence that one of his "successors" is too, see: http://hpanwo-voice.blogspot.co.uk/2011/11/poppy-burners-are-shills.html and: http://hpanwo-voice.blogspot.co.uk/2013/08/engineered-islam.html. What's more the well-known MI5 whistleblowers David Shayler and Annie Machon decided to go renegade because they found out that their organization was behind Wahhabist rebels in , rebels which had carried out some brutally violent bombings and shootings that left several innocent Libyans dead. These rebels are the same group that went on to overthrow and kill Muammar Gaddafi; today they're running the country, see: http://hpanwo-radio.blogspot.co.uk/2012/10/programme-19-podcast-david-shayler.html.
Posted by Ben Emlyn-Jones at 18:43