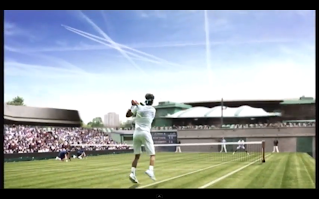 I'm not a fan of tennis I'm afraid. For the Men it seems to consist of people with bad personalities grunting homoerotically while whacking a ball at each other, and the other tries to hit it back... which they fail to do on most occasions. I do enjoy watching the Ladies' game though. Apart from the obvious reason, it's a more entertaining spectator sport because the women are much better at hitting the ball back than the Men are, so you do sometimes get what is known as a "rally" which is interesting to watch. There's been a lot of controversy over this year's world famous Wimbledon tournament, but my prime concern is not for David Cameron's male chauvinist blunder in Parliament, see: http://www.bbc.co.uk/news/uk-politics-23258911, but the use of subliminal messages in the BBC's title sequence of its coverage programmes, see: http://www.youtube.com/watch?f&v=EjObTueT56M. When watching this, study the shots of the sky. The viewer's eye is of course focused on the foreground action and so only perceives the background subconsciously, but if you deliberately focus on that background you will see heavy chemtrails in every shot. (Thanks to HPANWO Forum member "Red Wizard" for bringing this to my attention") The reason they're designed so that viewers not purposefully looking for them will only see them subconsciously, is because they are embedded subliminal images, see: http://hpanwo.blogspot.co.uk/2008/12/sexual-subliminal-in-station-poster.html. For some reason subliminal shots of chemtrails are happening more and more often. Here's an example from a 2006 TV advert for Virgin Trains, it consists of photoshopped scenes from famous railway movies inserted into modern train-based footage: http://www.youtube.com/watch?v=p51CvtgLo3k. One of those is the 1970 classic The Railway Children. The original movie clip which is blended with the advert did not have any chemtrails in (although there is some evidence that geoengineering projects date back to that year and before). Why are they doing this? I'm not sure, but it may be to desensitize us to what should be remarked on as an anomaly in our skies by any rational thinking person who happens to look up.
Posted by Ben Emlyn-Jones at 21:38

Bro-Po, consider a fact that Heathrow Airport is pretty near Wimbledon area, hence you can see so many planes' trails in the sky there. On the other hand, they look more like military jet trails...

Hi Bro Po. That's true, a major airport is nearby, but for some reason, jet aircraft don't issue such trails at low altitude, no matter what the air temperature.