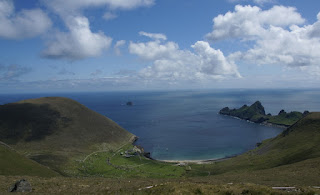 St Kilda is a remote archipelago that lies forty miles off the western coast of the in northwest . It is unique in many ways. The geography of its islands is some of the most dramatic and extreme in the , with the tallest cliffs and sea stacks of all. It is home to a number of unique species of birds and mice, as well as the famous St Kilda sheep. It also hosts a transient colony of almost two million sea birds. There are also several plant species there that exist nowhere else on Earth. Its place in the human world is equally fascinating. (Boudica moment alert!) It was once the remotest inhabited island in the with a small population, never more than two hundred. Signs of human habitation can be traced back to before 5000 BC yet in 1930 there were only thirty-six people living on the islands and most of them were elderly. This community was unsustainable and so they announced a desire to be evacuated to the mainland and this was granted on the 29th of August of that year. Between 1955 and 2009 the islands were inhabited once again, albeit by a rotation of visiting professionals; Ministry of Defence personnel working on the . This facility is now in the process of shutting down and will probably never reopen, especially if becomes independent. Visiting volunteers from the Scottish National Trust maintain the archipelago, and look after the ruins in the settlement, but today nobody lives permanently on St Kilda.

I researched St Kilda in depth a few years ago because it plays a prominent role in my novel Rockall which is now available for free online; see: http://hpanwo-bb.blogspot.co.uk/2009/02/rockall-chapter-1.html. I drew mainly on the book The Life and Death of St Kilda by Tom Steel, see: http://www.amazon.co.uk/The-Life-Death-St-Kilda/dp/0006373402. This informative and poignant book expressed an idea about St Kilda that has been a conventional one since anthropologists first turned their attention towards the islands. St Kilda has been regarded as a lost world, a very isolated human community that has had little or no contact with the outside world. This is an understandable notion seeing as how remote and inaccessible St Kilda is. Steel describes in his book how an estatesman from St Kilda's landowner, the clan MacLeod, would turn up in a boat once a year to pick up the islanders' rent. St Kildans had no system of money and shared out all internal produce in a manner rather like miniature communism; so they paid their rent in gull feathers, wool and any surplus vegetables they grew on their crofts. This was the population's only contact with the outside world; and the islanders would ask the estatesman all kinds of questions that nobody else would need to like "Who is the king these days?" and "Has a war been fought lately?" However a new book has just been published that questions that establishment view. According to St Kilda- the Last and Outmost Isle by Angela Gannon and George Geddes, the people of St Kilda were not some kind of "lost tribe"; they were instead an active part of the wider community. They were unusually self-sufficient compared to most, that is true; however they regularly interacted with people from the mainland Western Isles and beyond. Their exports were more than just a means to pay the MacLeod rent; they bartered them with other Hebridean communities in exchange for other goods. They played an empowered role in the lucrative clan economy. The authors describe St Kilda as "one of the most mythologized and misunderstood places on earth." They are both archaeologists who spent many months exploring the archipelago, and their book is the result of a nine year project to better understand the lives the St Kildans used to lead. The volume contains previously unpublished photographs of the landscape and people of St Kilda through the years. Source: http://www.bbc.co.uk/news/uk-scotland-highlands-islands-34659269. St Kilda- the Last and Outmost Isle can be purchased here: http://www.amazon.co.uk/St-Kilda-Last-Outmost-Isle/dp/190241991X. I've not read the book yet, but I am intrigued by its premise and hope I find time to soon. If its claims are correct then would it have influenced the way I wrote Rockall had I been writing it today? Quite possibly. In the scenario in the book, it is doubtful that Rockall would have remained unexplored if St Kilda had been less secluded than previously thought. Despite its towering cliffs, somebody would have scaled them and maybe even set up a community on the plateau. They would have had to share the land with the ErkDwaLa, the native population of Rockall. That situation would have changed many of the other plotlines of the story. I do not intend to amend Rockall in any way as a result of this new information; after all, fiction has to make sense internally, but it is not obliged to imitate fact.
See here for background: http://hpanwo-tv.blogspot.co.uk/2014/06/st-helena-airport.html.
And: http://hpanwo.blogspot.co.uk/2008/01/bhutan-happiest-country-in-world.html.
And: http://hpanwo.blogspot.co.uk/2010/09/bathing-into-history-part-1.html.
Posted by Ben Emlyn-Jones at 17:55