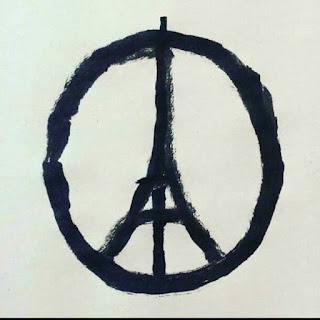 The only news story today is the horrific attacks last night in . The full death toll has not yet been calculated at the time of writing, but it is at least a hundred and twenty, they took place in five coordinated assaults across the city. Over three hundred people are in hospital; eighty are in a serious condition which means that the casualty figures will almost certainly rise. Gunmen opened fire at three restaurants in ' trendy Les Halles and Onzième Arrondissement districts. A short time later there was an explosion at the Stade de France sports stadium where was playing in a friendly football match. Then more gunmen stormed a theatre in the city where a rock concert was in progress and took hostages. The security forces stormed the building and killed the alleged terrorists, but not before a large number of the hostages had been shot dead. This is the worst act of violence has suffered since the German occupation during World War II. The question must be asked: is this another false flag? I would say that right now it's too soon to tell for sure, but I recommend treating news stories on this matter with a healthy dose of scepticism with a C. My initial suspicions over the Charlie Hebdo attacks in January have turned out to be justified, see: http://hpanwo-radio.blogspot.co.uk/2015/03/programme-127-podcast-nick-kollerstrom.html. During the Cold War the intelligence services trained groups of private citizens to act as "stay behind armies", resistance groups which would function as a guerrilla force if the invaded and occupied NATO countries. This was known as "Operation Gladio". However another more classified mission was the "strategy of tension". Gladio operatives carried out a series of bombings, shootings and particularly brutal robberies in shops and banks. These were blamed on militias from both the far left and far right. There's evidence to suggest that the Bologna railway station bombing in 1980, which killed eighty-five people making it the worst terrorist atrocity before 9/11, was not really carried out by the terror cell the Armed Nuclear Revolutionaries, those who were blamed; but was instead an Operation Gladio false flag attack. This BBC documentary on Operation Gladio never stays online for long so I recommend downloading it: https://www.youtube.com/watch?v=yXavNe81XdQ. So is it possible that a new War on Terror version of Operation Gladio is at work today? Absolutely yes. Are the attacks the product of that? Quite possibly. In the meantime I'm sure we all agree that this was a terrible crime, whoever did it. Deepest condolences to the loved ones of those killed.

As soon as I posted a status about this on Facebook last night an argument broke out in the comments box. Somebody indigently and immediately denied that this could possibly be a false flag operation and other commenters challenged her. Before long an exchange of personal insults broke out. This is a shame, but when an act of terror occurs it inevitably raises emotions. When 9/11 first happened I never questioned it; I was simply in shock like most other people. Somebody noted that the incident took place on Friday the 13th, which is associated with superstitions of misfortune (as well as a series of second-rate American horror movies). Did whoever carried out this atrocity deliberately choose Friday the 13th for that reason? I suspect that the September the 11th crane "accident" in was no coincidence, see: http://hpanwo-voice.blogspot.co.uk/2015/09/mecca-crane-disaster.html. However Friday the 13th is not considered unlucky all over the world. I'm not sure but I think in it is not; it is primarily a notion from English-speaking countries. Interestingly yesterday morning, just a few hours before was struck down by these attacks, a news story was released claiming that the British ISIS leader Mohammed Emwazi, known as "Jihadi John", had been killed in a drone strike. Personally I doubt whether this individual has ever existed; he is probably an imaginary character like "Ogilvy" from George Orwell's 1984, but even if he did exist then why did they decide that his death should be announced today? Coincidence? The French president Francois Hollande has called the attacks an act of war and has placed under a security lockdown. There is a nationwide state of emergency at the moment including the closure of borders, something that has not happened since the terrorist campaign of 1961 during the Algerian War. No doubt this will eventually give way to longer term strategic measures including more authoritarianism, surveillance and government control that will fundmentally change French society. In fact in the initial TV news reports last night the BBC reporter lamented: " is completely covered by CCTV, but has less than ten percent the number of cameras as ." If this is a false flag attack, why has been targeted for the second time in a year? As Nick Kollerstrom says in his HPANWO Radio interview, linked above, it could be connected to 's relationship to the Palestinians. has been one of the loudest voices in the international community calling for to be recognized as a sovereign state. are not impressed, see: https://www.rt.com/news/208187-israel-france-grave-mistake/. After Charlie Hebdo the French statesman and former presidential candidate Jean-Marie le Pen stated publicly that he thought that the murder of the staff at the satirical comic's offices had been a Mossad false flag incident. A few days later he was almost killed when somebody set fire to his house. We'll see how vocal he, and others, are this time. It's early days yet; we don't know all the facts, but I will keep you informed of any updates.
See here for background: http://hpanwo-voice.blogspot.co.uk/2014/10/alan-henning-killed.html.
And: http://hpanwo-voice.blogspot.co.uk/2011/05/osama-bin-laden-is-dead-duh.html.
And: http://hpanwo-voice.blogspot.co.uk/2014/02/lee-rigby-patsies-get-life.html.
And: http://hpanwo-voice.blogspot.co.uk/2013/08/engineered-islam.html.
Posted by Ben Emlyn-Jones at 14:54

Very well written Ben, it just amazes me the level of the coordination in the attacks. Starving, travel weary, ill & weak people with no money, some how managed to pull off a military precised attack in five different locations without anyone in the french forces knowing anything. That is not the work of people with nothing to lose, that is people who are fit and healthy, organised and well funded israeli mossad is my guess.

Just a few mentions of the media. Studying the way they report news can give you clues. In the very early hours there where no bloody scenes reported, no eye witnesses telling us what happened, lack of activity from emergency responses (I expect to see a mass rush of emergency calls but nothing) isis constantly being blamed, captions in the headlines saying immigrants shouting for Syria when attacks happened and how emergency measure and tighter control will be needed to deal with this threat.

All this to me is the call signs of a false flag event and is very similar to the london bombings. Within minutes it's all being given to us what happened, CCTV footage seems to be hard to come by, it will most likely be confiscated and kept under national security. The world leaders keep trumping the script of terrorism and isis, don't any of these educated people ever think?

This link had the idea of a false flag scenario in place one week before it happened. How is it possible that once again with ample warnings in place that France can be caught out? someone is able to bypass the security measures and make these atrocities happen then cover it up with bogus media stories.

KEEP UP THE GOOD WORK BEN

Thanks, Anon. Will do :-) It is definitely a precision attack. No amateur terrorist for sure. Just like how ISIS is a well-funded and equipped regular army with brand new vehicles, uniforms weapons etc. Thanks for the info. The initial reports in the media are crucial because it's only then that real info can come out before the official story has been established. I'll keep an eye out for any developments. I wouldn't be surprised if we see the same suspicious elements to this event that we saw with Charlie Hebdo.

lot of feelings stirred up by this understandably. I have already run into a lot of hateful remarks directed at me by discussing the bigger picture issues, even though it has been out of compassion and in a respectful manor. Ignorance to alternatives is understandable but without somebody discussing it the same ignorance boils over into arbitrary hate. I'm sure there are many Muslims frightened to even go out at the moment, I hope they are okay too.

Isn't it funny Ben how (as pointed out to me "Those 'terrorists' certainly are conscientious when it comes to keeping their passports up to date and always on their person - just incase they need to identify themselves at crucial moments whilst on secret missions..."

Anonymous here is ceertainly very clued up! I've quoted him a bit on my post - http://terroronthetube.co.uk/2015/11/14/h/ Paris Terror, by Whom?

Hey Ben,
Great post. I must admit that a few of my internal "alarm bells" went off when this story broke. On the subject of the media spin, BBC Midlands News ran a tie-in piece about the "coincidentally" timed anniversary of the Coventry bombings in WWII - which as you probably know was another quasi-false flag/"allowed to happen" slice of history!
All the best mate.
Carl James.

Thanks for your comments, X, Nick and Carl. I've a feeling the truth is going to come out. Every time they do something like this, more of their cards fall to the table. I've written a new post with updated mayerial.

Will do, Anon, and thanks for the link. I agree, it has the hallmarks of a Mossad or CIA false flag.