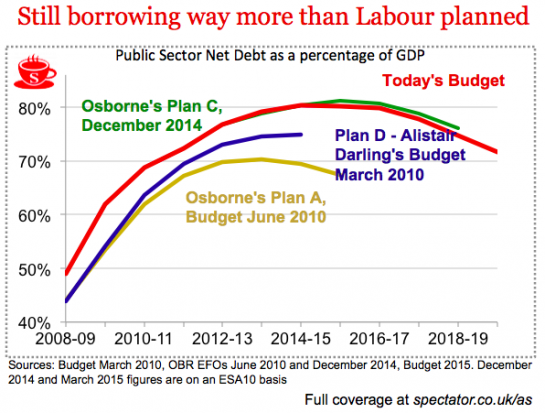 This year's annual Budget has passed with the traditional lack of excitement and enthralment. Still the Chancellor hasn't even managed to buy himself a new briefcase, yet we're led to believe he can manage the coffers of the nation. We have to endure the meaningless journalistic commentary, and once again the endless Punch and Judy debates between the Prime minister and opposition figures. Because we're approaching a general election, that has of course been an influence on the process too; neither side wants to dump anything to radical on us. The actual data makes very little difference to my own pocket and also, I can guess, to most other people I know, see: http://www.bbc.co.uk/news/uk-politics-31928641. There is very little newsworthy in the Budget even worth reporting. The Maralinga and nuclear test victims who have survived to the present day, often euphemistically called "veterans", are to receive a paltry packet of conscience money for having their health ruined by radiation exposure. Predictably the Labour leader, the Fabian Society prince Ed Miliband, has accused the government of making a "budget nobody would believe from a government they don't trust..." The Chancellor of the Exchequer, George Osborne, has boasted about how well the economy has recovered and how much unemployment has fallen. We're all living a much better life today thanks to him... apparently. However he has yet to give details of his planned benefit schedule; will there be significant cuts? Does he have to meet with the Conservative election campaign manager before saying anything? Anyway the minimum wage has been raised... by twenty pence! Generosity Incorporated... The thing is, if Labour had won the last election or formed the coalition then the roles would have been virtually identically reversed. The Labour chancellor would probably be saying pretty much the same things as Osborne and the Tory opposition would be echoing the words of Miliband. Most voters do not comprehend the true scale of deprivation in ; I'm not a socialist and I don't believe in forced equality, but I found this shocking, see: https://www.youtube.com/watch?v=aOJ93tAbPP0. What difference will a boost to the basic income tax threshold make on such an enormous pathology? I had a rather frustrating telephone conversation yesterday with some friends of mine who have decided to vote UKIP because they so badly wanted to get out of the European Union. I also think our country should exit the EU, immediately and completely. However I'm not going to vote for what looks to me like a controlled populist front. Farage offers a referendum on the EU when we should not be able to vote on it at all. This is because the 's entry into the EU was an act of treason. You can't have a referendum on treason. You just tear up the membership papers and jail those responsible. One of my friends asked me: "Who are you going to vote for then?" and I replied "Nobody". He then said: "If you don't vote then you've got no right to an opinion." I was dumbfounded. This is coming from a man who has read three David Icke books and regularly attends conspiratorial conferences like Probe and Alternative View. I asked him: "So let's suppose UKIP win the general election and Nigel Farage becomes Prime Minister; what do you think will happen? Do you really think that the 'Men in Grey Suits' will shrug and say: 'OK, well that's our trick rumbled then. We'd better bow to the will of the people'.?" He evaded the question. Luckily most other people in the Conspirasphere are more clued up than my friend. Voting makes no difference; democracy is a fraud. If we could change things by voting they wouldn't let us do it. Indeed the MP Chris Mullin has written a fictional political novel called A Very British Coup which explains this concept. It was adapted into a TV miniseries, see: http://www.channel4.com/programmes/a-very-british-coup/on-demand/1867-001. No genuine improvement will come into our lives until this reality is exposed and dealt with.
See here for background: http://hpanwo-voice.blogspot.co.uk/2014/07/jobcentre-minus.html.
And: http://hpanwo-voice.blogspot.co.uk/2015/02/cameron-pushes-workfare.html.
And: http://hpanwo-voice.blogspot.co.uk/2014/05/the-ukip-revolution.html.
Posted by Ben Emlyn-Jones at 18:21

Timely Article Ben. Yes, Election voting is a fraud and a placebo. No matter who you vote for there is no real change other than perhaps getting your local councillor to change the day your bins are collected and to move undesirables living in ILLEGAL 'houses of multiple occupancy' away from their homes, which are HUGE issues for some individuals.

Of coarse, the chattering 'classes' are also the only ones who vote in large numbers as the average person is too busy in a hand to mouth existence whilst the wealthy political types are only interested in the perpetuation of thoroughly discredited political theories. One thing that some significant members of British society (in all 'classes') loves is a good scape goat, hence, the good old racist, nationalist and patriarchical movements and political civil war incitement is now rearing it's timely head. I suppose in a way Ben they do possess a certain entertainment value even to someone as myself being of mixed parentage (White British and Black Caribbean).

I always say 'Truth' is relative but reality is what it is, true words are false when they lead to ignorance, this as you know is the method of the political class so when we are told unemployment has fallen, what does this mean? Temporary Work/Zero Hour Contracts/Private 'development-training' courses for the unemployed/Minimum wage below living costs? Take your pick and add to this list.

I am in the process of trying to secure somewhere to live and a job both of which will cost me about £2,000 just for travel, deposits, essentials just to get to a position where one can function. For most people I know they do not have the support to be able to carry out this let alone function in society as a working person, i'm fortunate as I have been able to sell some items that are valuable that I have had for many years otherwise it would be one step forward two back.

This whole wretched process of voting is redundant, we have been asset stripped at every level including our legal rights so what are we voting for to preserve?. I don't know! that's why I do not vote and cannot forsee myself doing so for the forceeable duration of my life.

The system I think will sadly only be effected by by some catastrophic disaster or war, much like the way the Black Death effected the rubric of society when it happened but the scary thing is is that this time it may be instigated not by natural causes but by a manufactures agent. I think any time of social revolution will rest a psychic re-aligning that may come from a spiritual shift or a new paradigm shift from Disclosure of Aliens for example, both of which remain to be seen. Thanks Ben

Hi X. I feel quite encouraged by the low voter turnout. It shows that many people are now grasping the issues that you and I have raised. An awareness lies beneath the surface even if it's not on top. And of course you're correct in that "employment" means something very different today as it used to. My daughter applied for a job last week and was offered a 16 hour contract. This is of course part time, but unbelievably this is normal recruitment policy in many firms. The staff are taken on part time and given overtime, at flat rate of course, as normal. Good luck with your own job hunting, X. Whatever happens in the future, disaster or ecstasy, I do not fear it. All I'm afraid of is things just carrying on as they are until it's too late.

"Whatever happens in the future, disaster or ecstasy, I do not fear it"

My philosophy exactly, such is the nature of conditioned time-space :)

"All I'm afraid of is things just carrying on as they are until it's too late."

Yes, I agree, especially for those who are rooted within a priori social momentum but we always have the innate ability of transforming the manipulation of or social sense-data into wisdom, breaking up the influence of the those that indeed hold influence over the many. Thanks for the good wishes in regards to work etc, likewise hope that all is well mate