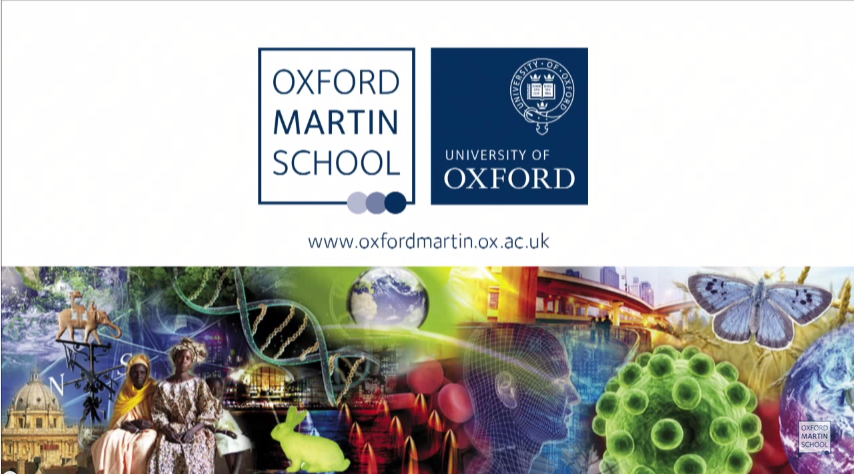 The occupies one of the most prime locations in the city. It can be found in the old Indian Institute building on the corner of Hollywell and , right in what is known as "the Heart of Oxford", the area where many tourist photographs and postcards shots are taken. The Bodleian Library, and the Sheldonian Theatre can all be seen from its windows. How did an organization only established in 2005 end up sitting on such a pedestal of prestige? The answer is in their mission statement: "The at the is a world-leading centre of pioneering research, debate and policy for a sustainable and inclusive future." See: http://www.oxfordmartin.ox.ac.uk/about/. Whenever you hear words like "sustainable" you know you're in trouble. It continues: "The great challenges of our time, such as rapid globalisation, population growth, emerging pandemics, or climate change share one feature. All refuse to sit neatly within traditional academic disciplines. This common factor makes these challenges difficult to grapple with, whether as individuals, businesses, or governments, and therefore for societies as a whole. Our response is the ." So the spectres of climate change, population growth and pandemics rear their ugly heads; that is why this new organization has been given a place of such importance in the University not to mention a hundred million pounds per year, and that doesn't include what it might be getting from 's "black budget". As I perused their official website more Orwellian terminology leapt out at me: inclusive... women's issues... diversity... justice in society... equality... These words sound very cuddly and benign, but they actually translate as: "White, heterosexual males are EEEEEEEvil! We need more authoritarian state control to protect you from them!" It indicates that the is a cultural Marxist brainwashing centre. Their YouTube channel is called "21 School", which sounds very similar to Agenda 21.

Since the New Year they've been running series of lectures on climate change which were all recorded and uploaded to their "21 School" channel, for example:
Climate Change- Dealing with Uncertainty: https://www.youtube.com/watch?v=ed4p7JYMYKs.
The ‘Perfect Storm revisited’- Food, Energy and Water security in the context of Climate Change: https://www.youtube.com/watch?v=m2Mt-UuZ1sU.
Biodiversity and Climate Change- What happens when we turn up the Heat on Nature? https://www.youtube.com/watch?v=qsYoL6aPUtY.
As I viewed this list of lectures it didn't take me long to pick up the undertone. It's the same subtext that I hear whenever George Monbiot or Mark Lynas speak: desperation! The dread and urgency is disguised behind academic poise and staid diplomacy, but it's there: "Something must be done or the Earth will die! Something extreme and drastic! The consequences don't matter, we have to do something or we're DOOOOOOMED!" Dr Mayer Hillman was far less oblique when he spoke at Conway Hall last year: He supported the controversial United Nations Personal Carbon™ Allowances and advocated draconian global regulation of transport for holidays, business and trade. He proposed ideas for the transformation of all sectors of the economy, geared towards organizing it in light of its use of fossil fuels and environmental impact, resembling communism. He proposed food rationing on the model used during World War II and stated: "The democratic process is not sacrosanct... The majority view in the developed world is that people are not prepared to make the lifetstyle choices for the dramatic Carbon™ reductions necessary and their democratic leaders do nothing except pander to their whims to get elected... Do we subscribe to the democratic approach to decision making which has so far failed? Or, in this instance, as I would argue, it has to be set aside. Whether the public like it or not, these changes have to be made!... If these changes are not made, we will assuredly hand over a dying planet to succeeding generations". See background links below. Dr Hillman has never spoken at the to my knowledge, but a lot of the points he makes are reiterated by those who have, albeit in a more implicit tone. What bothers me about this is that these climate change events are being held in one of the few institutions in the world that has an official course in geoengineering, see: https://www.youtube.com/watch?v=aixczHxdbfM. This makes a sinister combination; the seminar series could be interpreted as a covert promotional scheme for geoengineering projects. Of course geoengineering operations are already going on in the form of chemtrails, but I have a feeling they may go official soon to make them easier to introduce; all they need to do is persuade the people that it's a good thing... or at least a necessary thing. Events like this climate change season at the Oxford Martin School may also be used for recruitment by "talent scouts" for people who are cold and ruthless enough, but also reckless enough; see background links for more details. I notice also that the has an interest in transhumanism, see: http://www.oxfordmartin.ox.ac.uk/publications/view/154. So I think that the is a highly suspicious organization and we should keep a close eye on the material they publish. We must be ready to counter them with our own publications in this information war. In fact I'll print out some flyers to hand out at the door before their next live event.
See here for background: http://hpanwo-voice.blogspot.co.uk/2014/06/anything-to-save-planet.html.
And: http://hpanwo-tv.blogspot.co.uk/2014/04/oxfords-secret-science.html.
And: http://hpanwo-voice.blogspot.co.uk/2015/01/2015-and-climate-change.html.
And: http://hpanwo-voice.blogspot.co.uk/2013/09/bases-project-live-in-london.html.
Posted by Ben Emlyn-Jones at 18:49

I have had this organisation on my radar too Ben. Some interesting discussion going on among certain circles!...