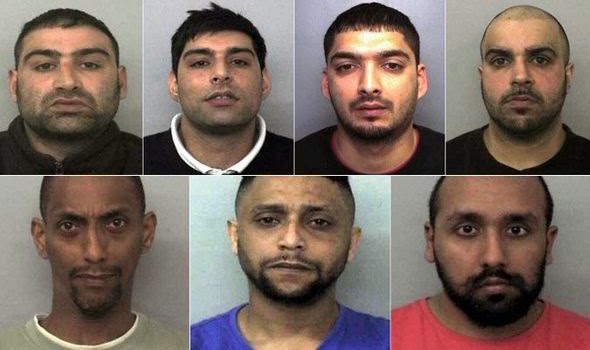 Over the last two years news reports have been coming out about a paedophile ring in ; this eventually led to arrests and convictions under "Operation Bullfinch". However, a new study claims that the police and social services didn't do enough to prevent the abuse in which the case study has concluded that up to 370 young girls were the victims. The perpetrators, Muslims of Pakistani origin, preyed on mostly white British girls. They pretended to befriend them, flirted with them and took them on dates where they gave them expensive gifts, alcohol and drugs in order to manipulate them into sex slavery and prostitution, see: http://www.channel4.com/news/oxford-abuse-operation-bullfinch-report-thames-valley-police. I'm sad to report that several of the men were former hospital porters whom I served with at the John Radcliffe; it's not just Jimmy Savile we hospital porters must feel ashamed about. As I've said before, I believe radical Wahhabist Islam is being deliberately installed in the Western world and that Muslim men in are being indoctrinated by Saudi clerics who are brought in purposely to preach hatred for non-Muslims in British mosques, see: http://hpanwo-tv.blogspot.co.uk/2015/02/burnley-sharia-muslim-hoax-update.html. It's no wonder that some people who hear these sermons are going to put those poisonous ideas into practice; these include the abuse of women and young girls, especially if they're not female Muslims. We saw the same issue in a few months ago. Crimes like these serve a long-term political strategy because of the drive for a new civil war as I explain in the HPANWO TV link above. This is why when paedophile rings are exposed that are not the work of Muslims then they receive far less media attention. It's much harder to find news reports about the Nanford Guest House scandal, also in Oxford, perhaps because the perpetrators were white Englishmen; and even this article has a follow on paragraph about the aforementioned Muslim gang, see: http://www.dailymail.co.uk/news/article-2336932/Three-men-including-pensioner-81-arrested-Oxford-paedophile-ring-investigation.html. The relentless focus on Muslims is not just a controlled response that is incitement to civil war, there is another danger. White and/or non-Muslim paedophiles are exploiting the opportunity to operate under the radar, so to speak. This could put more young children at risk who would otherwise be protected. The only solution to this is to work to protect all children in any circumstances; and also to put an end to this government plot to fill the country with an army of brainwashed Jihadist lunatics. Another feature I've noticed with official media reports into child abuse is that they always highlight lone perverts or small groups who commit their crimes independently motivated by a personal twisted sexuality. This is why the news is trumpeting the story of Gary Glitter right now, see: http://www.bbc.co.uk/news/uk-31657929. One thing the media are desperate to steer us a way from is any hint that atrocities against children are organized and institutional. This is why we hear very little details on the BBC or Daily Mail about the abuse issue, also in . In fact it's purely down to the dedicated work of Brian Gerrish and others at the UK Column that we know anything about it at all, see: http://www.ukcolumn.org/article/student-abuse-oxford-cherwell-valley-college-continues. My daughter was a student at CVC, but was luckily at the campus and away from the Blackbird Leys centre where this was going on; otherwise I'd have removed her immediately. The official reports on people like Jimmy Savile and Rolf Harris strenuously avoid the obvious conclusion, that they were carrying out an organized policy at the BBC and were on an institutional mandate to commit their crimes, see background links below. Although surely this flies in the face of the evidence and all common sense. The myth goes that the person who is the biggest threat to our children's safety is some lone maniac standing on a street corner dressed in a long raincoat; in truth it's probably somebody dressed in a suit, or a white coat, or a uniform, or a priest's cassock whom you hand your child over to in an office.
See here for background: http://hpanwo-hpwa.blogspot.co.uk/2015/02/jimmy-savile-nhs-knew.html.
And: http://hpanwo-voice.blogspot.co.uk/2014/12/esther-in-new-year-honours.html.
And: http://hpanwo-radio.blogspot.co.uk/2014/11/programme-112-podcast-brian-clare.html.
And: http://hpanwo-voice.blogspot.co.uk/2015/02/new-judge-for-child-abuse-inquiry.html.
Posted by Ben Emlyn-Jones at 17:02

A Poignant article. I had a few friends years ago that I no longer associate with but all of whom went through the care system, all suffered abuse of some sort. This has been going on for decades. It is all about power and status. The kids in childrens homes are the 'gutter trash', the abandoned that 'decent society' does not give two s**ts about except to demonize them as children and then to judge them as adults once they have entered the spiral of mental health issues, drug abuse etc. I mentioned power and status because if we look beyond the cultural conditionings as seperate entities what they all have in commOn is power and status. Going back to a particular friend whom I will not name he was sexually abused by another Man who offered money and security to him as a young lad in 'exchange' for debased sexual exploitation. This is the first example of power and status. Another friend who was a girl was raped by other lads in the home and most girls who were not extremely violent and ready to use a knife would become victims to heirarchy of men including the home management, many of which were involved. I can tell you from first hand knowledge that most girls in care in Birmingham in the late 80's and early 90's would be 'pimped' out by the other lads and under the knowledge of the care homes as this was a way for them to generate an income for drugs and also status. Somebody else I know commited suicide. In terms of the Pakistani Men issue you address properly in this post it again is a matter of power and status. As you point out these men are taught within their own households that the man has the status over the woman, on top of this those outside of the 'community' are considered of lower status physically and religiously hence the status aspect. As you are aware Institutional patterns of abuse operate in the same manor, in the 70's it was celebrity but also we have Politicians, Police, Judges and the Elite. It has always struck me Ben that it seems to me that that much of the sexual deviancy outside of these power groups tends to be the 'Upper Middle classes' and 'Elite' one thing i'd say about the so called 'working class' of which I am pigeonholed is that they are not sexually screwed up, even people I know who had been victims themselves. The segregation of public boy's and girl's schools is a methodology of the elite anyway and ironically the same pattern in the Pakistani community by and large, rather than being an overtly 'Muslim' problem in my opinion. Here I think we see a difference between abuse carried out by as you say the 'creep in the raincoat' which are few and far between, and the cultural abuse accepted within these other power groups which I believe is more prevalent and widespread. Of coarse as you point out targeting the individual and the tribe takes the heat away from the bigger picture of what's going on behind the ionic columns of marble. Cheers Ben

Oh and by the way, remember that it was not that long ago that women had no rights in this country hence the beginnings of the suffragettes Well into the early 2oth century and the 60's - 70's wasn't much better and that was without any hard line religious motive. . . So are we really that far ahead of those we point the finger at in real terms? Not that much . Cheers

So sorry to hear about their abuse, X. It'a all too common. I'd say that in elite circles deviant behaviour like you describe in your heartbreaking renditions is far more common. Maybe it's forcing kids to live away from their parents in single sex schools; not sure. I was shocked when I learned about Winston Churchill's upbringing... or lack of it. He hardly saw his parents from the age of five to eighteen. no wonder he went mad.