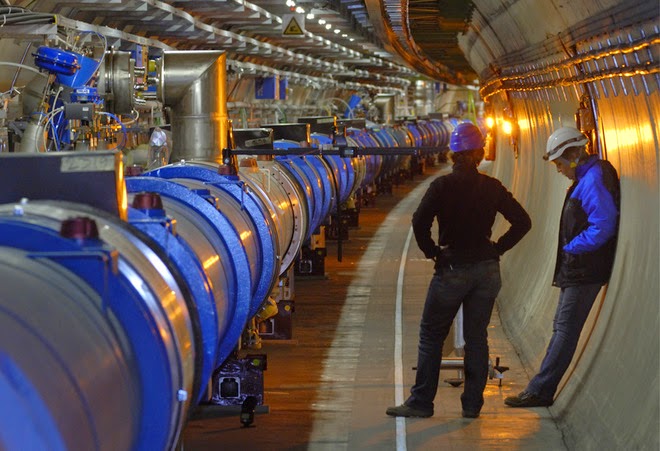 I've been reporting on the Large Hadron Collider for several years; I began when it was still in the final stages of construction, see the background links at the bottom. The LHC is the largest and most complex machine ever created by man; it took twenty years to build and it cost over six billion pounds. It consists of a tunnel no less than seventeen miles in circumference three to five hundred feet beneath the Franco-Swiss border near . Inside the tunnel, subatomic particles are smashed together at velocities close to the speed of light so that they break apart and release their constituent elements. One particle, the Higgs Boson or "God particle", that had only been postulated to exist was finally found in 2012, almost fifty years later. In January 2013 the LHC was shut down to be refitted. After its upgrade it will be able to run at twice its original power, up to 14 tera electron volts- TeV. Given the rather demure name of "Run Two", the future experimental schedule of the LHC will push the boundaries of known physics far further than even the high power collisions that unveiled the Higgs Boson. In fact one of the scientists involved, Prof. Tara Shears, said: "I can't wait for the switch-on. We've been waiting since January 2013 to have our proton beams back." That switch-on will begin this month. This process is quite complicated and it will take until about May before collisions can begin, but when they do, the scientists will be breaching entirely new territory. "Instead of trying to test the truth of this theory, what we really want to do now is break it,” continued Prof. Shears. "It's a really significant step in terms of what we might be able to see in the universe." The energy of the collisions will recreate conditions just a trillionth of a second after the Big Bang, the very moment the physical universe popped into existence, see: http://www.bbc.co.uk/news/science-environment-31162725. This will hopefully solve mysteries like how the levels of matter and antimatter in the infant universe were not symmetrical, so resulting in the residual matter which fills the universe today. Also what about "dark matter"? Can that be found? Questions have been raised over the safety of such a radical ruffling of normal spacetime. Concerns began before the LHC was first operational and they're going to increase now. The loudest voice appealing for caution is Walter L Wagner, see: http://www.lhcdefense.org/. He has been speaking out about the supposed dangers of particle accelerators for many years because he thinks that the high energy collisions of protons might produce mini black holes which could coalesce into a full size black hole that would engulf the Earth. Alternatively the collisions could produce "strangelets", a different kind of matter that has the power to convert the normal matter it comes into contact with into a copy of itself; thus starting a downward spiral that could result in the Earth mutating into a "strange star". The LHC's laboratory, the European Organization for Nuclear Research- CERN (Conseil Européen pour la Recherche Nucléaire) denies all this; and its defenders naturally include Prof. Brian Cox. I believe that Cox is being groomed to play a completely new and unique role in the media, see: http://hpanwo-voice.blogspot.co.uk/2013/09/prof-brian-cox-watch-this-space.html. However, we are dealing with situations completely without precedent here and we're going in blindfolded; even His Royal Coxness admits: "The LHC is certainly by far the biggest jump into the unknown.", see: https://www.youtube.com/watch?v=67q_2V6xOxE. Since then, Stephen Hawking has gone public claiming that the Higgs Boson is inherently unstable; in its present form it holds the structure of matter together and if that form was shifted then it would flip and that structure would collapse. He reassures us that the LHC doesn't have nearly enough power to destabilize the Higgs, but what if he's wrong? And maybe the LHC is just their first attempt, see: http://hpanwo-voice.blogspot.co.uk/2014/10/god-particle-doomsday.html. So no matter how tiny the risks, the consequences are so dire that they cannot be taken. They could lead to the destruction of the Earth, or even the entire physical universe... But, what if that's the idea. 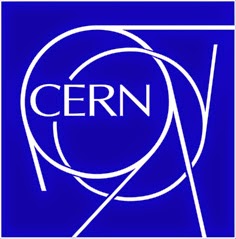 I've speculated several times, and I do again, that the powers-that-be are planning to pull off a "Götterdämmerung manoeuvre"; this is a kind of dog-in-the-manger, scorched earth policy. If they know that they've lost and they can never have their New World Order, then they'll drag the world down with them rather than let free people have it. How do I know this? I don't for sure, but it fits in with their hateful, megalomaniacal mindset. There are also visual clues, for instance, as I detail in the background links below, CERN has a very unusual statue in its forecourt, that of the Hindu God Shiva; isn't that a bit of an odd emblem to put outside a scientific institution? The emblem of CERN also has the number "666" encoded into it, can you spot it? In the Book of Revelations, this is the "number of the Beast" meaning the Devil. Interestingly, despite the fact that the LHC is merely a scientific experiment, security is unusually tight. To enter the working areas of the collider staff must pass through a security gate in which the retinas in their eyes are scanned; not even fingerprinting is considered secure enough. This process was a part of the plot for The DaVinci Code author Dan Brown's somewhat lesser novel Angels and Demons. Also could the Illuminati be constructing another such massive instrument on another planet, maybe below the clouds of Jupiter, or on a planet near a star many light-years away? If so, what can we do about it? Well I don't want to give you sleepless nights, dear HPANWO-reader. Like Gandalf from Lord of the Rings, I believe there are forces for good as well as evil at work in this world. I know there's no such thing as a messiah to sit around waiting for and that we humans are masters of our own destiny; it is up to we, ourselves to create a better world. Nevertheless, if there is some horrible atrocity awaiting us that is beyond our capability to prevent, and if somebody wants to step in and lend a hand, I will happily swallow my pride and accept. Indeed, could this by why the LHC suffered from mysterious technical problems a few years ago? Maybe it will again this time and we will never have a "Big Bang machine". I shall report on it if this happens.
See here for background: http://hpanwo-voice.blogspot.co.uk/2012/07/higgs-boson-and-lhc.html.
And: http://hpanwo-voice.blogspot.co.uk/2008/09/large-hadron-collider-starts.html.
And: http://hpanwo.blogspot.co.uk/2008/03/large-hadron-collider.html.
Posted by Ben Emlyn-Jones at 18:12

Gulp. That is one frightening machine Ben. We live in strange times indeed don't we?

Professor shears....would that be Billy shears

Simon parkes has a lot to say on this subject

Has he, Jason? I'm curious to hear what he says.