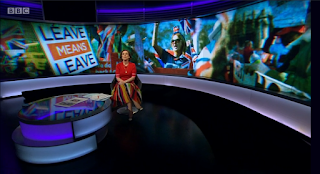 I have sworn never to have anything to do with mainstream media. I have been asked to appear in several documentaries for the BBC and Channel 4 and I have declined. When I saw the programmes concerned I was very relieved that I had done so. However, last night, , I was featured on Newsnight. This was not intentional; I just happened to be in the right place at the right time. I was standing on The Embankment in underneath Big Ben at because I wanted to witness the moment left the European Union on the nation's principle timepiece. Contrary to the government's claims, the delay to Brexit has never been ratified because the original Article 50 act has not been properly amended; therefore, according to the government's own law, we did in fact become an independent country last night at eleven PM, see: https://publiclawforeveryone.com/2019/03/26/did-the-uk-government-act-unlawfully-by-extending-article-50/. As homage to that historic moment I sang at the top of my voice in the street. I captured the event myself for HPANWO TV, see: https://hpanwo-tv.blogspot.com/2019/03/brexit-betrayal-protest.html. As it happened, the BBC cameraman present also did for Newsnight. The presenter of the programme, Kirsty Wark, said at 29 mins 41 secs: "And whilst we were watching that interview you may or may not have realized we didn't leave the EU. Yes, it has gone as you can see now from Big Ben. At eleven, the gallery upstairs informed me that a single man was singing as we hit the hour." That man was me. See here at 29:41: https://www.bbc.co.uk/iplayer/episode/m0003myb/newsnight-29032019. And: https://youtu.be/c-4d5ByaDbY?t=1806.
See here for background: https://hpanwo-tv.blogspot.com/2018/02/the-bbc-and-mind-control.html.
And: http://hpanwo-voice.blogspot.com/2015/03/the-great-ufo-conspiracy-review.html.
Posted by Ben Emlyn-Jones at 13:26

Way to go Ben! But is there any chance of uploading your interview/performance on HPANWO TV, as I am loathe to register with the BBC website, for obvious reasons.

So Big Ben was singing under Big Ben!