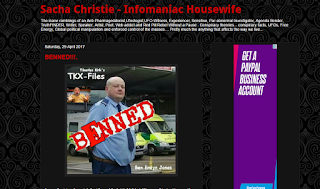 See here for essential background: http://hpanwo-voice.blogspot.co.uk/2017/04/the-larry-warren-controversy-part-11.html. Sacha Christie has published an article on her website entitled Benned!!!. See: http://sacha-christie-infomaniachousewife.blogspot.co.uk/2017/04/benned.html. It's the first thing she's written on her blog for almost two months and it addresses issues that were raised a long time ago, especially my being excluded from the OLM conference. Why did she only post her screed on the 29th of April? Clearly because she was waiting for the UFO Truth event, see: http://hpanwo-voice.blogspot.co.uk/2017/04/ufo-truth-magazine-southern-conference.html. She must think that the timing will give her "revelations" some kind of tactical significance or spoil whatever progress was made at UFO Truth. This is probably her most vicious and blustering post to date. Along with myself, Tino also receives some really nasty personal abuse; including a disparagement of his personal appearance. Yes, that is the level Sacha's "mission" has stooped to, folks! As always, the greater part of the blog's content is simply noise. It would take me hours to unpick every single point, and what purpose would it serve? To prove Sacha wrong? She already knows she's wrong and she doesn't care. It would be a futile effort on my part, as I explain in the background links below. Most of what she says I've already addressed in previous article in this series; the solicitor's letters etc. The larger part of what remains are statements most people know are false anyway; people who matter that is. However there are a few pinpricks of factual thrusts in her coal-sack of vile nonsense that must be addressed. She claims Malky managed to obtain Sacha's address from her medical records forwarded by a friend who works in the NHS. As a former hospital porter (have I mentioned that before?) I can tell you that is highly unlikely. First of all, it would mean that the individual would have to have clearance for the medical records storage database. NHS medical records are sealed off MJ-12 style in a restricted area behind a locked door through which only the medical records staff can gain access. If I was sent to get some documents from the storage unit at my hospital I would ring a bell and wait in an anteroom while the clerk went and retrieved them and gave them to me in a zip-locked folder. Malky's supposed friend is in serious breach of NHS confidentiality regulations and would lose their job for certain and maybe even face criminal charges. Are they really likely to risk that just so their mate can settle some Facebook barney? Sacha also claims that I accuse her of being the mysterious face reflected in the A10 photo screenshot. Not true. What I actually said was: "The reflection is far too indistinct to get a provable positive ID, as I've said before. I must say it does look rather familiar... but I will not name the person I think it is because I cannot prove it. However I think we can all honestly agree who it is not: Larry Warren." Source: http://hpanwo-voice.blogspot.co.uk/2017/02/is-larry-warren-fraud-part-7.html. Any abuse Chris Evers has received as a result of this matter was not incited by me. I am totally against that kind of behaviour and have been from the start, see: http://hpanwo-voice.blogspot.co.uk/2017/04/im-banned-from-conference.html. In fact I stated clearly in my interview with Tino on the matter, that I hoped people would still attend the OLM conference and enjoy it; see background link at the top. I said that I wished to remain dignified throughout. However firmly I put my foot down, it will always be wearing a spit-polished brogue. It is actually necessary to reduce the hate as much as possible in any situation like this. Projects for rehabilitating terrorists include a programme called "rehumanization"; and it applies just as much in far more petty situations such as this, see: https://www.youtube.com/watch?v=7sI6HIsV2rM. (I wonder what those people would think of the "mission" Sacha and her accomplices are on.) Another factual distortion Sacha makes is to claim Larry Warren is not a veteran. Yes he is. He passed out of a joint forces basic training centre in the and then did security and law enforcement police training and advanced air base combat training at a US Air Force facility before going on active deployment to . See Left at East Gate; what's more he has all the certificates to prove it... and yes, they are genuine. In fact he was injured in the line of duty like John Burroughs was. The length of his service is irrelevant. So, I hope that clears things up. No doubt there'll soon be more to come from Sacha et al, and when it does I shall be waiting.
See here for the next part: https://hpanwo-voice.blogspot.co.uk/2017/05/the-larry-warren-controversy-part-13.html.
See here for more background: http://hpanwo-tv.blogspot.co.uk/2016/06/scottish-ufo-and-paranormal-conference.html.
And: http://hpanwo-radio.blogspot.co.uk/2016/07/programme-197-podcast-larry-warren.html.
And: http://hpanwo-voice.blogspot.co.uk/2016/09/truth-mobbed-again.html.
Posted by Ben Emlyn-Jones at 08:25

There a lot of venom on her blogger site I will not go there again in a hurry sad that she even tries to mention banks for what purpose than to hurt you Ben, I wish people were not like this we are all seeking truth.

Thanks, Darren. She really does.