Body on the Moor Update 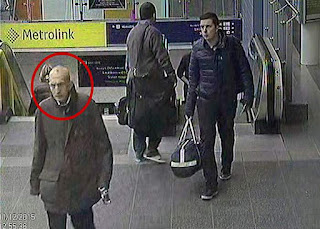 There has been an update on an incident I reported on last year, see: http://hpanwo-voice.blogspot.co.uk/2016/06/dovestone-man.html. "Dovestone Man" has now been positively identified as David Lytton, a sixty-seven year old originally from . However, as the earlier evidence suggested, he has been living in for the last ten years of his life. He flew from to , and arrived two days before his death. His friends and family described him as a "bit of a loner". He liked to compartmentalize his life, keeping different friends separate from each other. Detective Sergeant Colman who handled the police investigation said he'd never come across a similar case. The coroner's inquest ruled that he had died of strychnine poisoning. He had ingested the poison himself from a bottle he had brought with him to the location. He had few other possessions on his person. It's still unknown why he travelled all the way from to a hillside in Greater Manchester in order to die deliberately on that spot. There is one small lead, a plane crash that killed some members of this family that happened in the Dovestone area. It is even possible that Mr Lytton was on board that plane and survived the impact. However, the plane crash took place in 1949 when he would have been a newborn baby, if he'd even been born at all. Had his pregnant mother been one of the survivors? Nobody knows except David Lytton himself, and even his motives might have been subconscious. RIP. Source: http://www.bbc.co.uk/news/uk-england-manchester-38757699.
See here for more information: http://hpanwo-voice.blogspot.co.uk/2014/11/somerton-man.html.
And: https://youtu.be/Bfi5YEDhXxM?t=35m40s.
Posted by Ben Emlyn-Jones at 10:00

Very interesting as ever ben mate. Do you reckon this was fella was involved in the Moors murders? Weird coincidance I would of thought I mean if he wasnt involved. The plane crash idea doesnt convince me to tell the truth. Im thinking it was guilt of being involved with Brady and hyndley to be fair. Dont supose well ever know mate. Cheers. Baz

Thanks, Baz. I can see no evidence for his involvement. However, he died in a place not far from the murder scenes on Saddleworth Moor.

Yeah your probably righte mate to be fare. Its just I was reading the other day in the star I think it was that the police now reckon there were others involved in the moors murders. This bloke would of been the right age and it is very very close to were they found the other bodies. Could this bloke of chose to dye were the body of little keith benett still lays? Something tells me this bloke had a terrible terrible secret. Cheers Baz.