Lib Dems- the Instruments of Treason 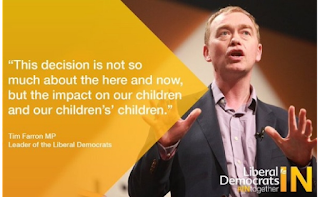 The Liberal Democrats have published their manifesto for the upcoming general election, see: http://hpanwo-voice.blogspot.co.uk/2017/04/general-election-snap.html, and it includes a second referendum on 's membership of the European Union. Article 50 has been triggered, but the process has not progressed to the point where it's irreversible. In doing so they hope to appeal to the wailing congregation of Remoaners who still can't accept that democracy means accepting decisions that go against you. Their excuses are summed up by the contemptible Richard Dawkins, see: http://hpanwo-tv.blogspot.co.uk/2017/03/richard-dawkins-patronizing-git.html. Brexit was the will of the people, not the whims of a bunch of uneducated white van drivers and comatose grannies with one foot in the grave. In their frenzy over Brexit, the Left have forgotten their foundational principle; they're supposed to hide their contempt for the white working class, not wear it on their sleeve. They have an incredibly patriarchal attitude towards the British public; it's as if we're small children who have misbehaved at school, and so Big Daddy Government has to step in and put us back on the right track. The Left say they love democracy, and they do... when it favours them. When it turns against them they abandon it for dictatorship without a qualm. Apparently we "didn't know what we were letting ourselves in for". Yes we did; the choice in the referendum was abundantly clear: "Should the remain a member of the European Union or leave the European Union?" There was no small print about how big the majority should be. Nothing was mentioned about how if it was less than 60% Leave then it didn't count. It was one of the bluntest and most comprehensive political documents in history. As Nigel Farage says: "What part of 'Leave' don't you understand?" The people of chose to Leave in a properly conducted referendum... yet a year later the vote is being spoken about as if it were merely an interim opinion poll. Source: http://www.libdems.org.uk/europe.

No reason to give any endorsement to the swamp of evil that is the Bride of Dracula's government, who are so confident of the stupidity of the British people they are openly admitting their intentions of screwing the mass of old people while taking control of the internet and the free flow of information. Fuck me, that May bastard was and still is a committed Remainer. The Brexit stance is an expedient and fraudulent one. She is tasked to eventually lock the UK in to the EU for ever. At a sign of eventual failure she'll be out on her scrawny arse as quick as Thatcher and the Pig Fucker were

Brilliant ben as always mate. Just having a pint now after the shift so excuse any mistakes. Yeah your left wingers as you say are your globalists and so to them there all in favour of the EEC. Thay can't get enough of your immigrants especially coming threw Europe originelly from the third world. Your greens, labour and liberal democrats all the same mate. They wont rest to tell you the truth until we swell are population in England to 1 billion Africans and your arabs. Of course they expect all these black migrants to vote for em which is why your labour party cant get enough of your immigration. Total bastards to be fair Ben. Lets hope the British people have enough brains to tell em to fuck right of! Oops sorry ben for me "french"! All the best mate and keep up the good work fella. Baz

I can't stand Farron as he is a God botherer. That stops me voting for them. Fancy letting a religious person have the codes to the number nukes. Doesn't bare thinking about.

"the Left have forgotten their foundational principle; they're supposed to hide their contempt for the white working class, not wear it on their sleeve." Indeed Ben and very well put. As for that sanctimonious git (aka millionaire Oxford academic), the following is as good an argument as any that I have read recently: Visit our HTML tutorial

P.S. It looks like PM May will be dealing with a new Taoiseach in the next Parliament. Be warned though, our new Taoiseach is likely to be a pro-European and arch Cultural Marxist; Leo Varadkar, a medical doctor, is a homosexual and half-Indian, so quite a few PC boxes ticked there. This astounds me insofar as my experience of Irish society heretofore was one of appalling homophobia and racism!