Trystan Swale and my "Perceived Racism" 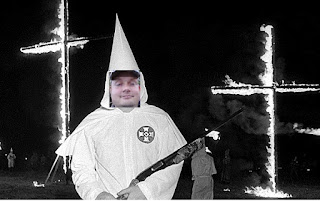 A couple of months ago, the skeptic Trystan Swale attempted an affront against my character. This demanded a serious response from me so I produced an entire HPANWO Radio show to create a single point of reference to give the other side of the story to anybody who comes across these false allegations by Trystan, see: http://hpanwo-radio.blogspot.co.uk/2016/05/programme-188-podcast-jews.html. Now Trystan has done it again, albeit in a very devious way that indicates an awareness of legal parameters. In a review on his website of my recent HPANWO Radio interview with David Farrant, see: http://hpanwo-radio.blogspot.co.uk/2016/06/programme-192-podcast-david-farrant.html, he says the following: "Earlier today I was made aware of the HPANWO Radio show that features conspiracy theory fruitcake Ben Emlyn-Jones interviewing David Farrant. I don’t normally give Emlyn-Jones time of day due to what I perceive to be his casual racism and anti-Semitism, but on this occasion I just had to listen..." I don't wish to provide a source and give Trystan additional publicity. I have no right to object to the "conspiracy theory fruitcake" statement; this is simply the expression of an opinion in purely rhetorical and personal terms. The same would apply to me if I were to call Trystan a two-faced spiteful conniving vindictive little turd... which I would never do, would I? The accusations of anti-Semitism and racism are a completely different matter and compel me to act. I am self-employed and my clients could get wind of this, as could my daughter's potential tutors when she applies to enrol in college again next term. Those mere words Trystan uttered are enough, in this day and age, to affect my wellbeing and that of my family. Trystan is clearly very cunning and has worded his statement extremely carefully. They key phrase is "what I perceive..." Trystan knows very well that I can't exactly go to a solicitor and complain about what Trystan perceives, can I? He'll reply: "But it's not an accusation, Ben. I'm not saying you're a racist and an anti-Semite; I'm merely voicing my own perceptions of the matter." I still have no idea why Trystan has turned against me the way he has. Did I do him wrong and then forget about it? I suspect that Trystan has simply become what is known as an "SJW- Social Justice Warrior". The SJW is a brand of fool who is very unique to the early 21st century. For example, it would be very difficult to explain to somebody just twenty years ago how what should have been a momentous occasion, the landing of a spacecraft on a comet, was trashed by a gaggle of whining malodorous little Twitter-pugilists because of the shirt the scientist involved was wearing, see: http://hpanwo-voice.blogspot.co.uk/2014/11/sexist-comet-shirt.html. In the background links below I relate further tales of SJW infamy. Trystan says I believe in "casual racism". I think this means that I am a white heterosexual male who does not open every sentence with an apology for existing. I refuse to condemn myself and my fellow WHM people as "EEEEEEEEEEEvil!" In fact I consider that kind of thing cultural Marxism, a very dangerous form of mind control; see background links at the bottom. So, all I can do when Trystan behaves like a prick in this way is refer people, once again, to Programme 188 of the HPANWO Show where I demolish every slur he makes against me until his case resembles the remains of World Trade Centre 7.
See here for more background: http://hpanwo-voice.blogspot.co.uk/2016/07/royal-troon-admits-women.html.
And: http://hpanwo-voice.blogspot.co.uk/2015/12/keep-rhodes-up.html.
And: http://hpanwo-voice.blogspot.co.uk/2016/02/richard-dawkins-banned.html.
And: http://hpanwo-voice.blogspot.co.uk/2015/12/cultural-marxist-cleared-of-racism.html.
Posted by Ben Emlyn-Jones at 18:47

Apropos Cultural Marxism and how it operates in ostracising and dismantling non-believers, a very interesting and erudite lecture all the way from Culturally Marxist Ireland.

Thanks, Laurence. The link is a photo. Is that right?

Hello Ben, I appreciate that you may have your differences with the RC church but hopefully you can see beyond that to the content of Waters' lecture as it goes to the heart of the on-going and increasingly universal issue of Cultural Marxism and the end of debate. Waters' experience mirrors your own forced redundancy and I believe that you are on the same side in the war (strange bedfellows do make... and all that!) In fact, I know that you are open-minded enough to appreciate the message if not the medium, unlike our 'tolerant' Cultural Marxists (meaning tolerant of everyone who agrees with them :)).

Hi Laurence. Yes, I realize the RC Church has issues I accept, even if I myself have criticisms of the Vatican etc. Interesting lecture. Thanks for sharing