An Open Letter to Tim Peake 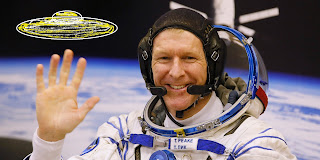 See here for essential background to this subject: http://hpanwo-voice.blogspot.co.uk/2015/12/will-tim-peake-see-ufo.html.

Dear Maj. Peake
First I must congratulate you on your recent successful mission aboard the International Space Station. You've left no doubt that is one of the big boys when it comes to space exploration. Since your return to earth you have, of course, made many statements and comments to the media, so I hesitate to ask you more questions about your mission. However I feel it is necessary because of the subject matter I'd like to discuss. So far your other media spots have not done so to my knowledge. When you were up in space, did you at any time see, or detect using other means, objects you could not identify, especially if their properties actively defied those of known objects such as meteors, planets, other spacecraft etc. If you did then I ask you to state it for the public record. You would not be alone in doing so. Many other astronauts have seen UFO's while on space missions dating right back to the beginning of the space programme. Jim McDivitt and Ed White saw a white cylindrical object during their Gemini 4 mission in 1965. Gennady Strekalov saw a UFO when aboard the Salyut space station and Buzz Aldrin reported seeing one on the historical Apollo 11 mission in 1969. In 2005 on your own space station, the ISS, your colleague Leroy Chiao reported seeing lights in a formation he described as "in a line" and "almost like an upside-down check mark". It's possible you have been briefed in on this matter already and ordered to keep silent on it. If this is the case, only you know what the best thing to do is. You can risk speaking anonymously to UFO researchers. If you do, make sure you select one who is professional, honest and will treat your information and source with the strictest of confidence; I cannot nominate recommendations here in case it jeopardizes your actions in the future. If you choose to go public you will gain the admiration of the entire UFO research community. The public acceptance of the UFO issue is, I think, one of the most important that the world and mankind face today. To be a part of that would be an achievement even greater than being our country's first astronaut.
Yours sincerely
Ben Emlyn-Jones
Posted by Ben Emlyn-Jones at 19:51

Would this be because the earth is really flat?

@ Daz and anyone else with this particular bizarre belief: Of course he went into space! How do you think the ISS ham radio signal appeared as the ISS came over the horizon? How come it had the Doppler shift of an object transmitting it in orbit travelling at the speed of the ISS? How come it came from the same region in the sky as the ISS was located? How come it faded out at any particular location as the ISS went below the horizon at that location? And that's just the stuff easily checkable in the public domain. So let's just nip that one in the bud shall we? Thanks.

Anyway, if he replies to the letter, I expect he'll just say that what the other astronauts are reported have seen turned out to be space debris, usually from their own launch vehicles. Sounds a reasonable explanation.

Whether that's true or not is another matter...

Janet, it's alright. I was actually waiting to have a sarcastic conversation with Daz. Daz, I cover this subject in Programme 177 of the HPANWO Show; see the HPANWO Radio site in the links column. I give the issue a fair hearing and I do NOT believe the earth is flat