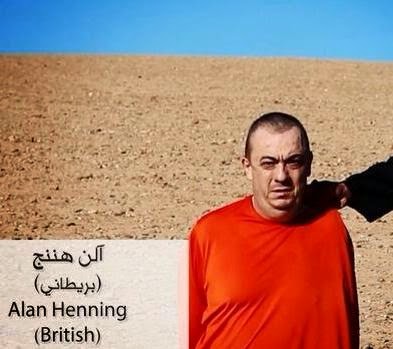 A breaking news story on the BBC last night announced that: "A video purporting to show UK hostage Alan Henning being beheaded has been released by Islamic State militants" (My emphasis), see: http://www.bbc.co.uk/news/uk-29485405. The BBC are showing uncharacteristic hesitancy over this new breed of propaganda they've been told to broadcast. Even that great revolutionary Bohemian pamphlet The Daily Telegraph displayed some caution when the videos of the identical style murders of James Foley and David Haines were released. Sadly Alan Henning probably is dead, but was he really manually decapitated while kneeling in his day-glow orange slacks? He was a humanitarian aid worker who was moved to act by the terrible suffering of the Syrian refugees fleeing from the civil war that has been raging in their country for several years. However forensic analysis of the videos so far uploaded to the internet by the Islamic State are far from conclusive. Why would somebody fake a video of a man having his head cut off? In a nutshell- shock and awe, not for the people of , but for those in the West. This latest chapter in the War on Terror opened with the emergence of a brand new bete noire to stock the hate fest: a group of black-shrouded ghouls known by several names: "ISIL", "" and most recently, "Islamic State"- IS. The news has reported that IS are "well-funded" without asking who might be doing the funding. Most emergent guerilla powers in the world have to scavenge and improvise as they expand, wearing their own clothes, using captured enemy weapons and adapting vehicles they seize in their occupied territories. However IS wear standard issue uniforms and are equipped with new-looking weapons and equipment, more like a modern regular army. They drive round in brand new 4X4 pick-up trucks with custom made turrets for heavy machine guns. There are pictures of these vehicles parading like a column of tanks, all brand shiny and new off the line. The image of the murder, whether real or not, was shot on high quality digital cameras from two angles. Despite the fact that this was an outdoor shot in the hot desert sun, the lighting is perfect without any silhouettes. The most alarming factor in the equation is that this is terrorism with a British touch. The veiled killer speaks perfect English with a black accent, although his voice sounds modulated for some reason. There have been several more news stories claiming that MI5 are "closing in" on the perpetrator; perhaps they should check their own personnel files.

The level of disinformation and visual rhetoric in this new media offensive is totally different to anything we've ever seen before. It's far more brazen and cartoonish than the stories that came out of the and invasion. The IS killers are almost perfect spoof caricatures, straight out of a Jim Abrahams film. They're only one of a number of similar organizations that have popped up in various parts of the like Al-Shabab and Boko Haram. Where are all these lunatics coming from? Did huge numbers of people just wake up one morning and decide to become Wahhabist Muslims? Did they then accidentally find some lost wallet containing enough cash for all the weapons and military training they needed? Or is this whole business a massive government false flag psyop, a long drawn out, worldwide 9/11? Which is more likely? The results that have been milked from it are also similar to that of 9/11: a new phase of this global, eternal, unwinnable war against this phantom enemy, this collective Emmanuel Goldstein brandishing Korans. Even the Prime Minster David Cameron admitted that we will be at war for "generations". Some military analysts are already calling it "World War 4", the Cold War being WW3. And on the domestic front, we have new Big Brother laws and practices, the possibility of passports being withdrawn and British citizens being impounded abroad without charge or trial, see: http://hpanwo-voice.blogspot.co.uk/2014/08/cameron-locks-out-british-jihadists.html. Cameron has also announced at the United Nations that those who "believe in conspiracy theories" about 9/11 and 7/7 are anti-Semites, IS-supporters and even equated to terrorists ourselves, see: https://www.youtube.com/watch?v=SOdDu6J0B1I. As Mark Dice points out, this is not only false and slanderous, it could set a highly dangerous legal precedent leading to the establishment of official Orwellian Thoughtcrime. With his typical dedicated flair, my friend and fellow researcher Nick Kollerstrom decided therefore to hand himself into the police, see: http://www.youtube.com/watch?v=UbzkF-TWIFw. I don't know where this is all going to lead, but it scares me; and it should scare us all. As always though, the success or failure of this evil venture is totally dependent on our reaction to it, whether we trust the government, whether we believe the lies, psychological warfare and misinformation... or not.
See here for background: http://hpanwo-voice.blogspot.co.uk/2014/08/chris-spivey-arrest-whos-next.html.
And: http://hpanwo-voice.blogspot.co.uk/2014/02/lee-rigby-patsies-get-life.html.
And: http://hpanwo-voice.blogspot.co.uk/2013/08/engineered-islam.html.
Posted by Ben Emlyn-Jones at 10:15