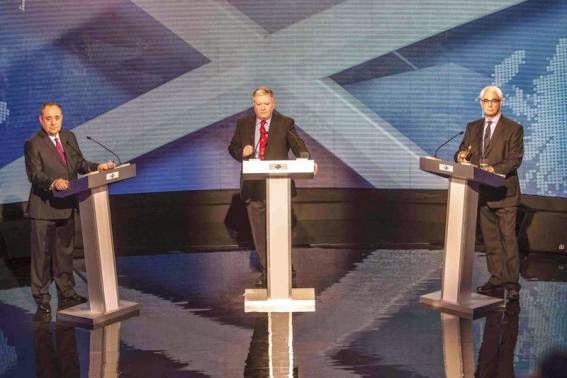 Salmond's position is that is essentially an occupied country; there are no Scottish MP's at all in so that all decisions taken for are taken outside the country by non-Scots. He mentions the Bedroom Tax and the erstwhile Poll Tax of the early 1990's, the issue that brought the SNP to prominence in the first place. currently subsidizes the economy in terms of income tax by an internal deficit of eight billion pounds, yet its students have to pay tuition fees. One of the biggest WMD bases in the world, the Trident facility at Faslane, can be found a few miles from and that so many people in are in poverty, on average many points below people in . needs to be a just society, but it can't be when "there are more pandas in zoo than Tory MP's in !... This is an opportunity we must seize!" Darling, who was a minister in Tony Blair's government, hit back by saying that should have the "best of both worlds" part of the 's strong economy, with a devolved parliament to handle much of its own affairs and more jobs and security. He fears the dangers of the change that would come with independence. "It's not an issue of patriotism; you can be a good Scot in a ; and once the decision is made, you can never go back!" At times the discussion became very heated, especially when Darling pressed Salmond on his plans for the Scottish currency which he has been very cagy about. Salmond is still determined to introduce his idea for a " zone", but that comes with enormous practical and moral difficulties, like the Bank of England being in a foreign country and so could not set interest rates etc, see links below. "It's not 's pound!" Salmond sniped back at Darling claiming that he was being a hypocrite because he used to support the idea; also he brought up Darling's record of when he was Chancellor of the Exchequer during the bailout. Salmond simply kept repeating over and over again how he wants to keep the pound and that's it. He opposes joining the Euro... or says he does... He's opposed to a completely new currency, even though many other Yes campers support that idea. Darling says then that the only other option is for Scotland to use the pound as a foreign imposed unit of exchanged, like how Panama uses the US Dollar; this would be a disaster. The audience whistled and booed as Salmond dithered. Darling also warned of the risk of the public service deficit an independent would have to take on. How would national debt be shared out? How would national product? How would pension funds? Salmond said that the end of "austerity", that wonderful new Orwellianism, would make up for that.

Salmond made the point that the No campaign was very negative and centred on fear and doubt. He saw his own position as hopeful and forward-looking. But his cross examination became absurd; he brought up jokes made by members of the No contingent, like having to drive on the right side of the road or even being more vulnerable to attacks from outer space! What's interesting is that both men agreed on the importance of clinging onto the European Union for dear life, but that the referendum might change the status of within the EU, a key point of this whole matter I think. Questioners from the audience kept berating Salmond for his ramshackle currency plan, but Salmond didn't change his very coy attitude; this is extremely suspicious and there's little doubt that he was put on the spot badly by whatever motive... or on whoever's command... he has that makes him stick stubbornly by his plan for a Sterling zone or bust. Maybe the idea is to string people along on a confidence bubble just until they all vote Yes; and then during the eighteen month handover period when it all goes to pot he'll just shrug and say: "Sorry, I was wrong, it's not going to work. I didn't want this, but we have no choice but to take the Euro," see links below. If this is the tactic then I don't think it's working; Darling was definitely stronger in the debate, and the opinion polls following the programme show a decisive boost for the No tendency, mostly at the expense of the undecided, see: http://whatscotlandthinks.org/questions/should-scotland-be-an-independent-country-1#line (Nevertheless the longer term trend in the polls is that the Yeses have been gaining steadily this year, most of the undecided have so far moved to the Yes side). Salmond performed so badly that I wondered at one point whether he was trying to throw it. Even a member of the audience chided him on his conduct. Of course this can't be possible, if not then what on Earth was he playing at? I've a feeling he knows more than we do at this point; maybe he's had secret orders handed to him at the recent Bilderberg Group meeting in that he's obviously keeping to himself. Perhaps it's all reverse psychology of some kind; I'm not sure. I maintain that I hope the Scots will vote No on September the 18th (Maybe on Shetland they'll boycott the vote altogether as Stuart Hill advises, see: http://hpanwo-radio.blogspot.co.uk/2014/08/programme-98-podcast-stuart-hill.html). I'm not a flag-waving British unionist and my reasons are very different from those espoused last night be Alistair Darling. There's even a part of me that wants to see a Yes victory, when my heart is talking instead of my head; perhaps for deep sentimental feelings of my past as a Welsh nationalist that I can't quite shake off, but also out of sheer curiosity. It would certainly make politics far more interesting. I just think the referendum is a plot to fragment the so that it can be more easily absorbed into . has fought for its freedom against Illuminati-occupied empires since the time of the Romans, but today the world is a different place. The principle bulldozer for the advancement of this empire lies to the east in and, with one of history's greatest ironies, nationalism and euroscepticism in the is holding it at bay. I don't want to see part of any empire, but right now the last thing they want is to jump out of the frying pan into the EU fire.
See here for background: http://hpanwo-voice.blogspot.co.uk/2014/05/independent-scotland-battle-of-numbers.html.
And: http://hpanwo-voice.blogspot.co.uk/2014/02/what-next-for-scottish-independence.html.
And: http://hpanwo-voice.blogspot.co.uk/2014/05/plaid-cymru-and-eu.html.
Posted by Ben Emlyn-Jones at 19:34

But Ben, isnt Scotland already in the fire? Or rather two fires, Britain AND Europe?
Better to be in only one fire than two surely?
Reiny Randle

I think the UK one is a smaller fire right now, Reiny. It also has implications for the rest of the country. A UK without Scotland would be smaller and more disjointed, and so easier to be mopped up by the EU along with Scotland.

Scotland would indeed be vunerable to the EU by leaving the U.K. When politicians discuss 're-negotiation' with the E.U it usually means some free-trade deal that binds a country to the paramaters of the deal whatever it may be and im afraid Scotland would become victim to this. Of coarse, the free trade 'Capitalist' market is in-fact not even an Capitalist society because it is about monopoly. Huge trade deals create monopoly that is worse than Capitalism of which I am neither a socialist or Capitalist. The reason South America and Africa have started to look to Russia and China is because huge elite trade deals done unfer the guise of 'free market capitalism' has seen America sell corn to Africa hence they cannot trade their own and also South America even buys its tortillas from America for f**cks sake not to mention the arms deals and the Banking Drug money that has caused the South Americas to become a Drugs state. Anyway, Europe of Luxemberg is a tax haven for huge corpoprates who deal in these trade deals and at its head is corrupt officials who allow certain countries in the E.U to have 8+% more trading power than their other so called EU counterparts which is illegal under the actual EU terms so my advice to Scotland is to remain part of the UK for what it's worth and see what happens with the fallout from de-dollarization etc.