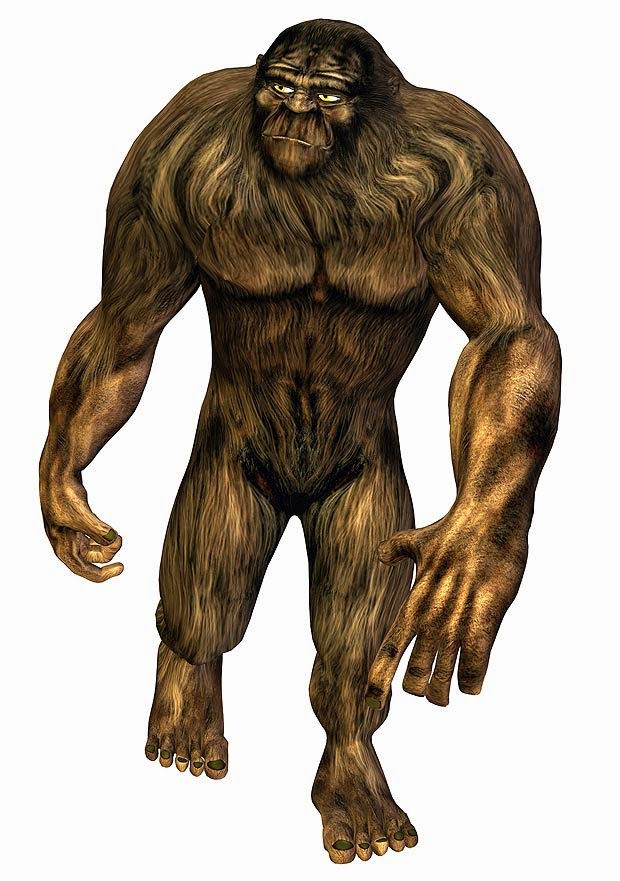 Royal Tunbridge Wells is a quaint historical town in which is reputed to be the epitome of middle . Its very name conjures up images of well-moved lawns and pruned hedges, double garages with Ford Mondeos, golf courses, the Rotary Club and Women's Institute, church hall events, commuters standing on trains and housewives who write in to the BBC to complain. The last thing you'd expect to see in Tunbridge Wells was what a rambler in the local woods allegedly came across in October 2012. He was strolling on the Common, a forested park near the town centre, when he was approached by a humanoid creature covered in fur with red eyes that the witness called "demonic". It was much larger than a man, about eight feet tall. He fled the scene, understandably, when the being made a loud roaring sound at him. This is only the most recent account of very similar entities seen in the same area and in many other places in . Reports date back at least seventy years, and the most recent news story on the subject caused another resident to come forward with a tale he had heard about an encounter with it on the Common during World War II. In this case it was a couple sitting on a bench when the beast accosted them from behind; again they ran off. Nobody believed their story and thought they were making it up. The description is identical: "a tall, hairy ape-like creature with eyes that were 'burning', had a reddish colour". Paranormal investigator Neil Arnold has collected even more reports from , , Hythe and , see: http://www.kentnews.co.uk/news/britain_s_bigfoot_spotted_in_tunbridge_wells_1_1699895?usurv=skip. This folklore might have inspired the Kentish author Clive King to write his famous children's book about a modern day caveman: Stig of the Dump, see: http://www.booktrust.org.uk/books/view/33315.

This phenomenon has become known as the "Kentish Apeman" and it remains a mystery. Some residents suspect that it's somebody dressed up in a furry suit playing a prank, but so far nobody has confessed or been exposed. It would also have to be a multi-generational enterprise to explain the encounters covering seventy years or more; you'd think the novelty would have worn off by now. As regular readers will know, I have a lot of interest in the appearances of creatures known as "Bigfoot" or "the Yeti", large upright-standing primates living in the wild. They are so far undiscovered by man, but we sometimes encounter them when our paths cross unexpectedly.
See here for background: http://hpanwo-voice.blogspot.co.uk/2014/04/bigfoot-hoaxer-confesses.html.
And: http://hpanwo-radio.blogspot.co.uk/2013/06/programme-51-podcast-cryptozoology.html.
And: http://hpanwo-voice.blogspot.co.uk/2013/10/yeti-found.html.
Having examined the evidence I'm fairly certain beasts like this exist somewhere on our planet, but not everywhere. The reason a large land animal might go undetected by man would be because it lives in a separate habitat to us. This is where new species tend to be discovered, high up in the mountains, in the centre of the great forests or deserts, or deep in the oceans; regions of the Earth where very few humans live. Suburban is not one of these places. Yes, there are areas of ancient woodland in which would take a few hours to walk across. Possibly there are unknown species of fly or beetle living in them, even a big cat or two, but not a primate larger than a man. The kind of wilderness where an ecosystem could covertly support a Bigfoot-like animal are the forested and mountainous regions of western , or the . is the seventh largest island in the world with an area of 88,000 square miles. Squeezed onto that landmass are over 61 million people; that makes its mean population density 693 human beings per square mile. Locally that can vary considerably, between the mountains of and central for example, but that's the average for the whole of . The on the other hand is far bigger in area, 3,700,000 square miles, but with its population of 318 million that gives it a density far lower, just 88 people per square mile; and the has some regions covering thousands of square miles in which the human population is virtually zero. Conversely 's population density is 1,200 per square mile, twice the national average. I'm verging with the notion that a researcher once told me, that a Bigfoot colony could remain hidden in darkest , but it's simply not possible in . So what did those people see? The newspapers claim that Neil Arnold says that the Tunbridge Wells apparition is a paranormal figure, but not a flash-and-blood monster. He supposedly says the archetype exists in legend, the "wild men of the woods". Could it actually be something more akin to a ghost; I'm reminded of the famous case of the "Beast of Bolam Lake" which began as a monster hunt, but ended up discovering something else, equally strange but very different indeed, see: http://www.cfz.org.uk/expeditions/03bolam/. I saw something similar myself in once, see: http://hpanwo.blogspot.co.uk/2010/10/river-ghost.html. Could these phenomena be intrusions of entities from a parallel universe or manifestations of our spirit? It's perfectly possible that the apemen of the remote continental forests are biological creatures, but if the ones in built up areas cannot be, and they're not blokes in suits, then what else are they?
Posted by Ben Emlyn-Jones at 19:21

Thank you for the interesting post. I am sure there is a manifestation of something a mixture of primal-ness and the 'Minds' experience in the present where they meet in another realm because the past present and future are not really so but are called such. It is an interesting phenomena that tends to occur in the outlands, off the beaten track where time is undisturbed unlike the city.

Just to add the Biological existance of such creatures as an aspect is not separate from the Psychological aspect. This is the only problem when 'proof' is only valid within the realm of the temporal senses. Mind proper overrules and underlies Biological and Psychological presumption. This dynamic is changing in the post modern world and we may be surprised as to what other things may lurk out of the undergrowth!. Cheers Ben

You're welcome, X. Keep watching the skies, but always keep one eye on the ground too. ;-)