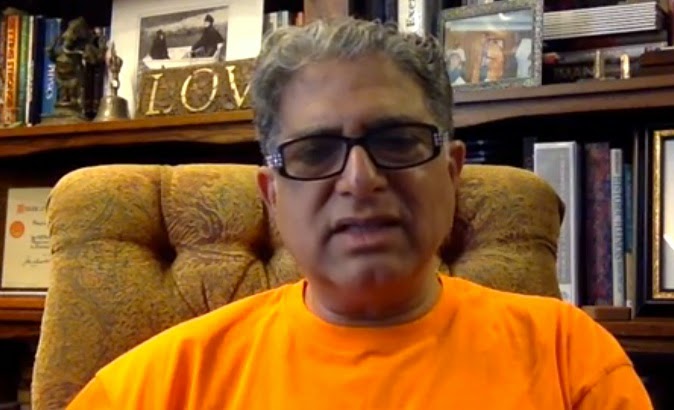 Prof. Brian Cox, whom I've discussed many times before, for example see: http://hpanwo-voice.blogspot.co.uk/2013/09/prof-brian-cox-watch-this-space.html, has just Tweeted this: "I claim your million dollars, @deepakchopra, for showing that your understanding of quantum theory is flawed. Is there a form to fill in?" The reason for this Tweet was because Deepak Chopra has recently offered his own version of James Randi's Million Dollar Challenge. This Challenge is a legendary undertaking in the Skeptic community. In 1964 Randi offered a thousand US dollars to anybody who could prove the existence of supernatural phenomena or paranormal abilities in a properly controlled scientific test. Over the years this prize has increased as new funds were pledged until in 1996 when it plateaued at one million dollars. Over a thousand people have applied during the fifty years it's been running, but Randi has never agreed that any of them deserve the prize. The Challenge is held by Skeptics to be... The... Last... Word... relating to any doubt over whether the supernatural and paranormal are true or not; however I don't think it is as watertight as it is promoted to be, see: http://hpanwo-voice.blogspot.co.uk/2013/10/randi-sued-over-million-challenge.html. Robert McLuhan has written a book that's extremely critical of Randi and his activities, one I highly recommend, see: http://www.skeptiko.com/randi-prize-exposed-in-new-book/. Since the advent of the Challenge there have been many others posed, mostly by people on "the enemy side"; for example by paranormal investigator and broadcaster Ross Hemsworth, see: http://hpanwo-radio.blogspot.co.uk/2012/10/programme-18-podcast-ross-hemsworth.html. No Skeptic, not even James Randi himself, has ever accepted any of these challenges offered to them, which is very suspicious in my view.

The most recent of these Randi-style antithetic $million challenges has come from Deepak Chopra, a bestselling author and media personality on spiritual and healing matters. A few weeks ago he issues his challenge personally on video, see: https://www.youtube.com/watch?v=Up6GqgBK5Qo. What Chopra demands is for Randi, Richard Dawkins, Michael Shermer and others like them to explain how electrical currents running through neuronal circuits in our brains can possibly generate the feelings, sensations and thoughts that make up our conscious experiences. This is known as the "hard problem" of consciousness, and it's not a new one; in fact it is one of the oldest scientific and philosophical conundrums in the world. People have been pondering it throughout all of history. How Chopra thinks anybody can solve it right now at his request I don't know. However, then again, the point I think he might be making is not really a serious demand for contestants; he's essentially performing a parody of atheo-Skeptic materialist foolishness. He knows very well that his targeted audience cannot meet his challenge, and because of this their own professed certainties about the non-existence of God, ghosts, the soul etc can also be legitimately disregarded. If "normal" experience is a mystery then how on Earth can the paranormal be so manifestly explicable? As Chopra says: "You take such pride in saying that the so-called 'paranormal' is a perceptual trick, a magic show; then explain to me the ultimate magic show, the universe." The response from the Skeptic movement has been extremely predictable, in fact it echoes almost exactly their attitude to last year's Crop Circle Challenge, see: http://hpanwo.blogspot.co.uk/2013/02/crop-circle-challenge-2013.html. It has also resulted in the aforementioned hashtag war between Chopra and Prof. Brian Cox, see: http://www.newstatesman.com/future-proof/2014/07/deepak-chopra-doesnt-understand-quantum-physics-so-brian-cox-wants-1000000-him. The Coxxer has demanded the million dollars from Chopra and Chopra has not given it to him; the thread is reproduced at the bottom of the New Statesman article. The SGU presenters call it a "fake challenge mocking James Randi's $Million Challenge", see at 12.16: http://www.theskepticsguide.org/podcast/sgu/467. It's certainly mocking it, but does this automatically mean Randi's Challenge is not fake?

In a way, the Skeppers have this time a more reasonable gripe than they did with the crop circles. Even if everything the non-manmade hypothesis theorists say about crop circles is correct, it hardly comes close on an intellectual level to solving the hard problem of consciousness. However I am still disappointed in the Skeppers' handling of Chopra's challenge. It would be nice to have seen a slightly more positive and creative approach. A lot of the Skeppers' criticism, that its conditions and objectives are too ambiguous, are valid points, but instead of scornfully dismissing Chopra in this impulsive way, why not encourage him to modify the test? Negotiate more stringent and comprehensive rules and criteria, ask him to be more transparent. Both Chopra and the applicants should cooperate to design the tests beforehand. Make sure the applicants know in advance what is required of them; and, once the test is underway, leave no doubt in the minds of either party if they achieve the pre-stated objective. After all, this is what Randi always throws back whenever people accuse him of designing an "unwinnable" challenge. Skeptics need to practice what they preach. With a little adaptation Deepak Chopra's Million Dollar Challenge could be made far more interesting and educational, even if the prize is as far beyond our grasp as it always has been. The real quandary, what is underlying this entire dispute, is that one of the most popular current perceptions of the hard problem is simply to see it as a non-issue. This idea is most famously proposed by Daniel Dennett and Susan Blackmore. It states that qualia, conscious experience, the mental state that the hard problem centres around, doesn't exist at all as an actual structure. It is simply an emergent collective effect of more basic sensory and cognitive processes in the brain, see: https://www.youtube.com/watch?v=JP1nmExfgpg. This means in practice that you don't exist... you heard me right... and neither do I. Our sense of self, the feeling of "I" and "me" are nothing but a grand delusion. Dennett and Blackmore claim to have found evidence for their notion. But can this really be the case? As Anthony Peake piercingly asked of Dennett: "Who writes your books then?", see: http://hpanwo-voice.blogspot.co.uk/2013/11/consciousness-beyond-individual.html. This is surely the most audacious proposal that anybody has ever suggested. How can it possibly be true? I'm not alone in feeling dubious about this subject. If you'll permit me to play amateur psychologist for a moment, it might provide an explanation. As I said above, for thousands of years thinking men and women have quested to find an answer to the hard problem. When neuroscience began in earnest in the 20th century there was hope that the answer was within our grasp. For the first time ever, scientists began to learn how the human brain works. It was a heady and exciting era; expectations were very high. The scientists worked hard over the course of the century, and into the current 21st, and the brain slowly but surely gave up its secrets... except one. I can't help wondering if, as David Malone also suggests in his outstanding documentary film Soul Searching, see: http://barang.sg/index.php?view=videos&part=20, this tentative and half-hearted solution to the hard problem of consciousness is merely a frustrated and disappointed reaction to our failure in solving it.
Posted by Ben Emlyn-Jones at 09:42

Ben, the Randi challenge has some odd properties that make it readily reducible to a few slogans, which perfectly suites mindless skeptics who cannot form their own opinions and thus can only sloganise. Thus they have practically ruined the internet. Quite a destructive achievement

Must agree that Chopra could refine /explain his challenge into simpler terms (sloganising) There are not many take away lines available in his first challenge video, eloquent though it is. I learned in my own videos that repetition is necessary and saying things in different ways for people to get and retain the message.
I don't recall Chopra actually saying "If you are going to arbitrate the paranormal, Mr Randi, first you must define Normal, The ONUS is on James Randi. That makes HIM the NORMAL claimant ! That must be at beginning and end and middle of the video.Its important to use simple skeptic slogan language back at them.

That type of simple slogan must be repeated a few times in his follow up videos, that you suggest. Its got to be in the names of videos.
Chopra could also add the requirement in describing normality to include an explanation for all the evidence for telepathy and afterlife which is, massive (150 yrs worth and thus normal) Zammit has taunted Randi for 10 yrs over this, to Randi's silence.

It seems that Chopra has not learned enough skeptic-speak yet.
And I never thought Chopra would end up making skeptic videos LOL Just like I do.

It seems Chopra is too accustomed
to florid inspiring poetic language for his message to be even apprehended by the skeptics. Words like "transcendent" are not apprehended by skeps at all
Its only meaningful to TM people.
And in follow up videos mirror imaging Randi's claim details could be a winning strategy to expose its inbuilt traps.
That the winning applicant must sign away all rights to publicity, and cannot engage lawyers. And the final decision rests solely in one self appointed
individual who stands to lose 1 million. LOL. Its a trap many skeps would fall into and end up accidentally damaging JR as blatantly unfair.